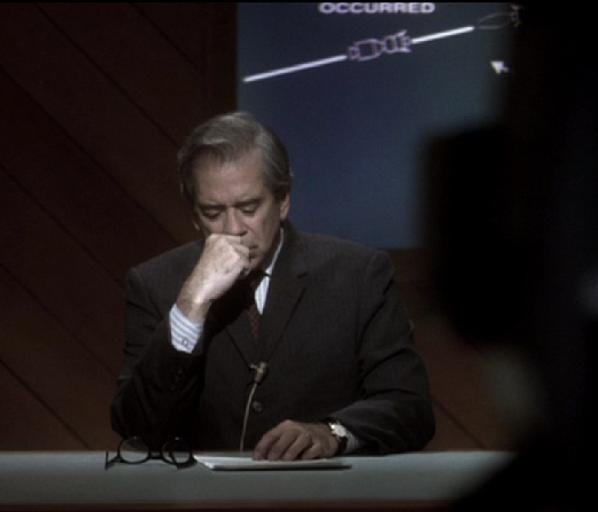 The Apollo 13 mission as seen through the reporting of two newscasters, highlighting the changing character of news coverage.
The previous reviewer missed this episode while actually watching it. the Apollo 13 story is well known enough that making a show about the way it was saved was redundant. so instead they focused on the press and how news coverage morphed from the Edward R Murrow/Walter Cronkite in-depth coverage to the tabloid news such as Fox News and MSNBC now practice. It is a brilliant episode that follows the brash new reporter covering the "people" and the fading away of the old reporter who reported the story. Anyone interested in news coverage should watch this episode. In my opinion it might have been the best. "filler added to make ten lines" what a stupid rule
Tom Hanks and the crew of "From the Earth to the Moon" have given us some fascinating insights into the space program; the Gemini program, the Apollo One fire, the building of the Lunar Mondule, Apollo 8 ending the turbulent year of 1968 on a high note, the historic landing of Apollo 11, and even the irreverent fun of Apollo 12.

Then they had to deal with Apollo 13.

Now unless you've been in a coma for the past fifteen years, you know that mission was dramatized in the highly acclaimed movie of the same name. In fact Tom Hanks, Ron Howard, and a good portion of the cast and crew had come over to work on this project after finishing the movie. Add to that the fact that the movie was only three years old at the time and thus still fresh in people's minds, and you see why it would have been unthinkable to simply rehash the story with different actors.

Of course they were stuck between a rock and a hard place, because you can't really skip over it (even though they essentially did with Apollo 10 and later with Apollo 16). You can't really show the story from the POV of mission control or the astronauts' families since the movies pretty much covered that as well. What to do then?

What we're left with apparently, is an episode told from the point of view of the TV reporters who covered the story. More specifically, it depicts Emmett Seaborn, clearly based on Walter Cronkite; (my guess is they didn't want to show the real guy, as he was associated with another network). Played by the likable (and, unfortunately, late) Lane Smith, Seaborn had appeared in most of the preceding episodes, essentially as a Greek chorus.

Here, he comes to the forefront, reporting on the crisis of the mission as it unfolds. On the other hand, we have Brett Hutchins, an ambitious and hungry young reporter played by Jay Mohr, who'd much rather cover more sensationalist aspects, such as the reactions of the astronauts' families. Seaborn is appalled by such an invasion of privacy, but the network exec clearly find Hutchins' approach more appealing, giving him more support while the older Seaborn is marginalized.

After the astronauts splash down to safety, Hutchins is shut out of a NASA press briefing for going after the astronaut families, and it appears the little weasel has finally gotten his comeuppance. Unfortunately not. A NASA official, unwilling to alienate the press, lets him back in. In a rather depressing ending, Hutchins gets the big story while Seaborn is phased out. I'm guess it was supposed to represent the honest Cronkite-types of the journalism world being replaced with the more sensationalistic ones prevalent today.

Aside from the dissatisfying ending, my main problem was largely that in a series depicting real people and real events, we had a conflict that never happened between two people who don't exist. Seaborn and Hutchins are completely fictional (if composites of real people). What does any of this have to do with going to the moon? Why should I care?

Ultimately, I can't fault Hanks, Howard, and company too much, since I really couldn't come up with a better angle that hadn't already been covered either. The irony is if the movie "Apollo 13" hadn't been as successful as it was, this mini-series almost certainly wouldn't have gotten made. Maybe the price was having this weak episode. That doesn't excuse the series' other weak episode "The Original Wives Club", however, but that's another story.