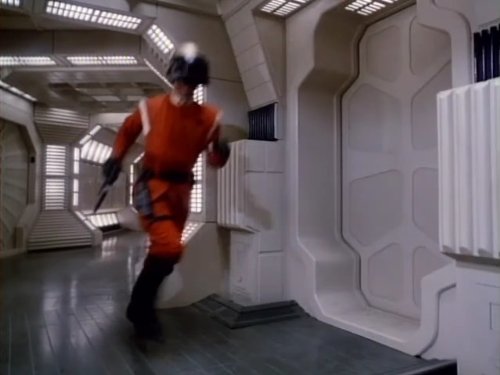 Julie and Donovan sneak aboard the Mother Ship to look for a hidden list naming all the Resistance leaders; Diana schemes to have Lydia's brother slain during a ritual celebration.
In a bad episode, there's a short scene that may be the worst scene in TV history. A perfect storm of abysmal writing, clueless directing, and wretched acting. A pair of unknown technicians kneel under a ship as a line of prisoners file past: He: I have to stop them. She: Jonathan no, it's too dangerous! He: I love you. I guarantee, you'll rewind a few times. Other than that, the semi-revamping is interesting, and mostly for the better. Ever so slightly and saucily, they embraced their over-the-top quality more. The alien ship now has a gay interior decorator. Not a fey caricature either, a straightforward (if that's possible) gay interior decorator.
Visitor field lieutenant James (Judson Earney Scott) captures and transports various shipments of resistance fighters to the mothership. Visitor interior decorator Oswald (Peter Elbling) prepares the ship for the "Feast of Ramalon" at the strongly worded insistence of Diana and Lydia.

Meanwhile Visitors Fifth Columnist/mothership commander Phillip (Frank Ashmore) meets with the resistance and agrees to transport resistance leaders Mike Donovan (Marc Singer) and Julie Parrish (Faye Grant) aboard the mothership where they will try to rescue captured resistance fighters, recover a list of Earth resistance leaders and meet with Earth scientist Dr.Steven Maitland, an old flame of Julies who is feigning collaboration helping them create a virus which will kill Earthlings.

For me hints at the dark culture of the alien lizard invader "Visitors" were another strong draw to watching the show. This episode depicts their Feast of Ramalon i.e. sacrifice of the youngest officer on board ship in their ceremony room, the same type of alien terrarium room in which Diana and Charles were married, Charles' corpse was sent off into the cosmos, where Diana and Lydia had their truncated fight to the death etc.

Consummate series villain Diana (Jane Badler) the Visitors very ambitious and utterly ruthless (In addition to being an omnisexual cannibal) Science Officer is of course perpetually plotting against her arch enemy Lydia (June Chadwick) concurrent with her battle against the Earthling resistance. This is the episode in which she has Lydia's little brother Nigel (Ken Olandt) transferred aboard ship so she can watch her beloved sibling be the sacrifice of Ramalon. The dark tour-de-force continues.

One of the excesses of the show was the apparent ease with which resistance fighters were able to get aboard the L.A. mothership where Diana was active. It was like a second home to them and members of the Fifth Column who collaborated with the Earthlings are seen talking freely with them both at the resistance hideouts and aboard the mothership with little discernible tension.

Of the technological advances the Visitors had surveillance cameras don't appear to be one of them. But then neither does peripheral vision as we see Diana and Lydia along with Visitor guardsmen walk right by resistance leaders Mike Donovan (Marc Singer) and Julie Parrish (Faye Grant) in the corridor aboard ship.

I guess the writers tried to square that with the gimmick in this show where Mike and Julie are captured by Diana, feign ignorance and then pull their own faces off revealing themselves to be lizard people. A puzzled Diana lets them go and they pull the lizard masks off becoming themselves again.

That level of self send-up was a bit too much for me. What was really too much was seeing Mike and Julie put the human masks of themselves which they were wearing over the lizard masks onto a pair of visitors they have knocked out in what turns out to be a diversion which buys them a few seconds of time at most.

Some inconsistent writing makes this episode one of the lesser ones overall.