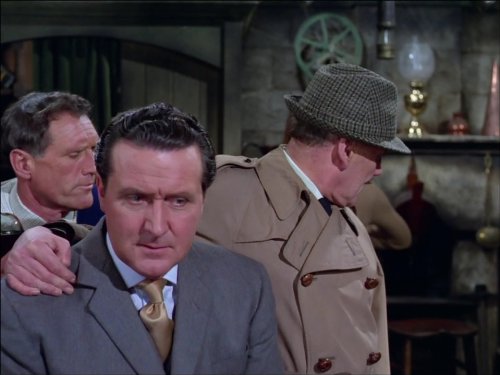 Five years after a mine disaster, Mrs. Peel and Steed are called upon to investigate the spooky goings-on at the local inn. The ghost of the 16th Duke of Benedict, who was reputedly lost in the mine disaster, has been seen wandering the area and Emma joins SMOG and FOG in a ghost hunt. The Duke's ghost supposedly takes Emma with him to his final resting place in the collapsed mine, but Steed descends into the shaft to rescue her. He finds a secret underground city that is being used to stage an invasion of England; the mine disaster was just a cover-up for the plan. Steed rescues Emma and country by cutting off access to the topside elevator.
Steed and Mrs Peel are called in when the ghost of the 16th Duke of Benedict, who died in a mining accident a few years before, is seen rising from a grave by the local drunk. They aren't the only ones investigating; there is also Mandy McKay of FOG (Friends of Ghosts), who is determined to prove ghosts exist; and George Spencer of SMOG (Scientific Measurement of Ghosts), who wishes to disprove their existence. These two spend the night in the church where the ghost was last reported and soon Mandy is fleeing the scene in terror and George is dead ghost or no ghost there is something dangerous going on. Steed goes to see the current duke and gets a less then friendly from the gamekeeper and an unpleasant character named Masgard seems a little too concerned when Steed tells the duke that he is impressed by his wine cellar Steed is talking about the wine but Masgard's reaction suggests the cellar needs investigating. During another investigation Mrs Peel is captured by the 'ghost' so Steed and Mandy head into the mine and make a shocking discovery.

This was an enjoyable episode which combines the possibility of the supernatural with enemy activity. When we learn the truth behind the ghost it is inevitably far-fetched but within the world of The Avengers one can believe it! There is a decent amount of action including Mrs Peel rescuing Steed from a firing squad and several fights. Julian Glover is suitably menacing as Masgard but it is Pamela Ann Davy who provides the best guest performance as Mandy McKay; a character who isn't what she seems and provides the episodes best twist one I didn't see coming. Overall a good episode even if it isn't one of the best. "The Living Dead" begins as an investigation into the existence of ghosts, then changes course as the corpses pile up. Rupert Staplow (Edward Underdown, "The Murder Market") appears in the local cemetery, five years after supposedly dying in a mine cave-in, bringing on the attentions of both FOG (Friends of Ghosts) and SMOG (Scientific Measurement of Ghosts). SMOG's George Spencer (Vernon Dobtcheff, "Room Without a View" and "Thingumajig") is quickly found dead, while FOG's Mandy McKay (Pamela Ann Davy, "Mission to Montreal") insists that the ghosts have taken away Mrs. Peel. Making his second appearance on the show, Julian Glover's nasty Masgard takes shots at the unprotected Steed, and tries to bribe the local drunk into silence about the spectral happenings. Also present in the familiar cast are Howard Marion Crawford ("What the Butler Saw" and "Stay Tuned"), John Cater ("The Nutshell" and "Death at Bargain Prices"), Jack Watson ("Silent Dust"), and Alister Williamson, not seen since the first two episodes, "Hot Snow" and "Brought to Book." Previously seen in "Two's a Crowd," the busy Glover would return for "Split!" and "Pandora," but may perhaps be best known for his villainous turn in the 1981 James Bond thriller "For Your Eyes Only."