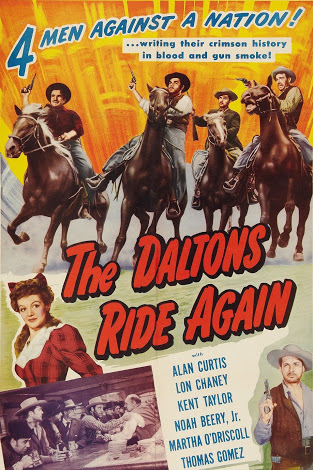 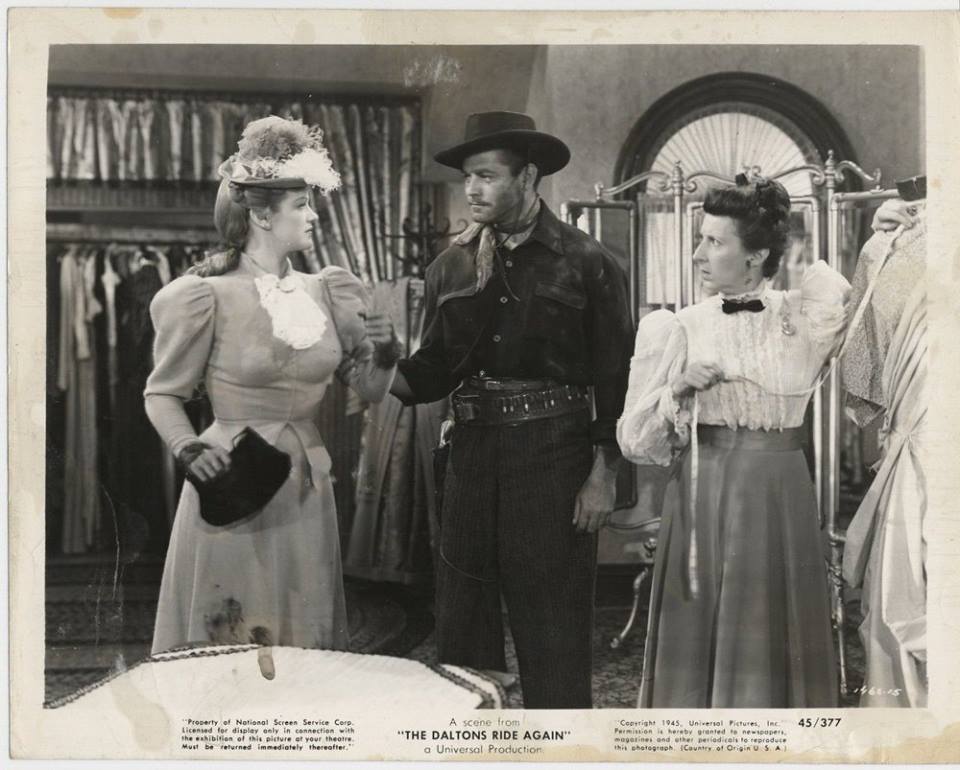 The four Dalton brothers learn that a friend of their father has been murdered by a group of land-grabbers and swindlers. The clean up the gang leaders and members, and then proceed to rob the bank controlled by the gang. During the robbery, three of the brothers are killed and the fourth is persuaded by his fiancée to give himself up.
1945's "The Daltons Ride Again" was the last of five Westerns that Lon Chaney did during his starring days at Universal during the 1940s. Like all the others, a routine plot gets a decent workout from a fine cast, apart from the sluggish performance of top billed Alan Curtis (a former male model, never much of an actor), with second billed Chaney stealing his scenes as Grat Dalton, Kent Taylor giving all the orders, Noah Beery Jr. his usual amiable self. Completed in late Sept '45, it had already been a lean year for Lon, who only had done Abbott and Costello's "Here Come the Co-Eds," and the final two entries in the Inner Sanctum series, "Strange Confession" and "Pillow of Death," while just ahead lay "House of Dracula," his exit from the studio that employed him for 28 features, 2 shorts, and 2 serials in five years. Freelancing thereafter, Chaney did just four features in two years before his triumphant return to Universal, reprising his 'baby,' The Wolf Man, in 1948's "Abbott and Costello Meet Frankenstein." Three final titles for the studio were 1951's "Flame of Araby" (costume adventure with Maureen O'Hara), 1952's "The Black Castle" (Gothic horror with Boris Karloff), and 1958's "Money, Women and Guns" (an intriguing mystery-Western starring Jock Mahoney and Kim Hunter).
"The Daltons Ride Again" is one of those slick little second feature westerns turned out by Universal in the 40s. With no major stars, the film is nonetheless populated with many familiar faces from the studio's contract player list.

The "B" plot has the Daltons (Alan Curtis, Kent Taylor, Lon Chaney Jr., Noah Beery Jr.) on their way to Argentina to escape their past. On their way they stop at the ranch of a friend of their father's Tex Walters (Stanley Andrews) to pay their respects. It is no secret to say at this point that the Daltons trip to Argentina will be somewhat delayed.

It seems that the Prairie Land Development Co. is trying to take over the local ranches in order to acquire the right of way for the railroad. The only rancher holding out is you guessed it, Tex Walters. After Walters is killed by bad guy Wilkins (Walter Sande), the boys decide to stay around and help his widow. At the same time Emmett Dalton (Curtis) falls in love with the daughter of the local newspaper editor (Martha O'Driscoll) and plans to turn himself in.

While all of this is going on, the land company headed by Graham (Milburn Stone) and Wilkins are raiding the local ranches and blaming the Daltons. Of course the Daltons prevail and defeat the villains.

Director Ray Taylor keeps this little oater moving along. It has the look and feel of a larger budget film (except for the plot). It has some comedic elements as well, such as the Daltons telling the widow how well they know the banking business when they aid her in getting a loan from the local bank.

Curtis and Taylor are adequate as Emmett and Bob Dalton but the under appreciated Chaney and Beery steal the picture as Grat and Ben Dalton respectively. Other familiar faces in the cast are Thomas Gomez as the town drunk (or is he?), Douglass Dumbrille as the sheriff (sheriff?) and John Litel as the newspaper editor. Keen eyed western fans will spot the likes of Paul Birch, Richard Alexander, George Chesebro and Bob Wilke in various bit parts.