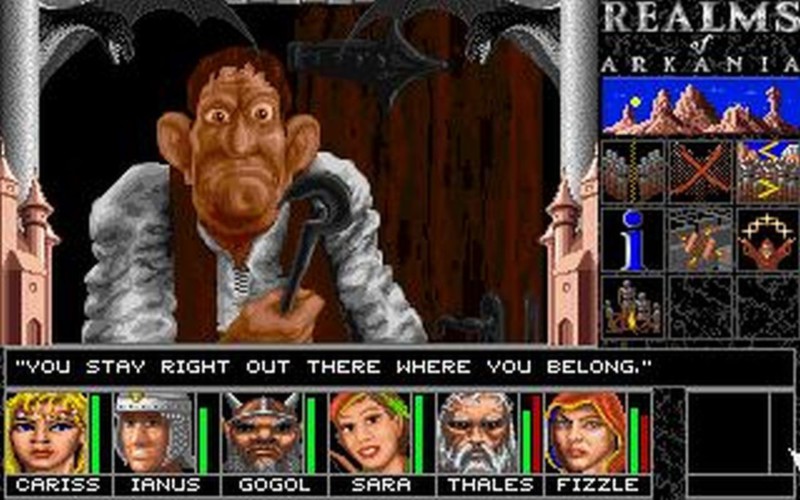 Blade of Destiny (1992) is the first part of the glorious Realms of Arkania Trilogy...

An Orc army stands ready to attack Arkania's villages and towns. The only hope of saving the land lies in the legendary Blade of Destiny. Can you find this magical weapon in time to stop the siege? A rich and detailed adventure that will engage your mind and challenge your imaginations.

The Realms of Arkania Trilogy

The Realms of Arkania games (Blade of Destiny, Star Trail and Shadows of Riva) deliver a prime example of the classical European fantasy universe. Based on Germany's most popular pen & paper role playing game, it was also the first German computer RPG series to get widely recognized outside of its home country. To this day it holds a stable hardcore fanbase that loves the games for their comprehensive adaption of the pen & paper ruleset and the believable medieval fantasy setting. 7aa9394dea 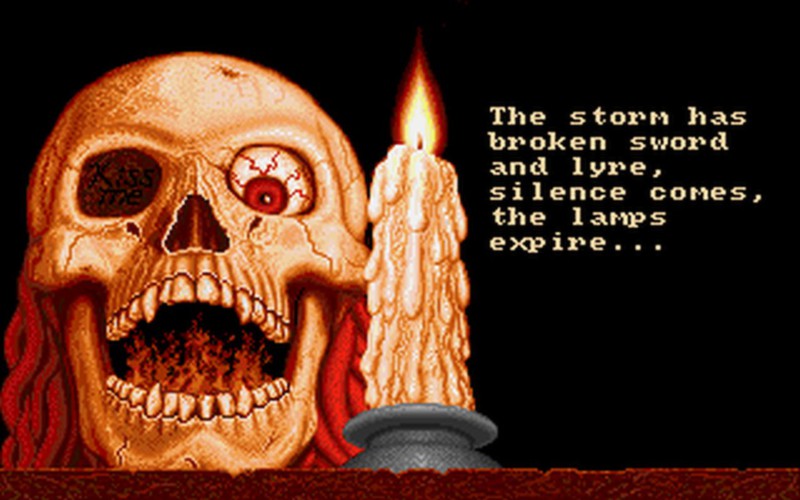 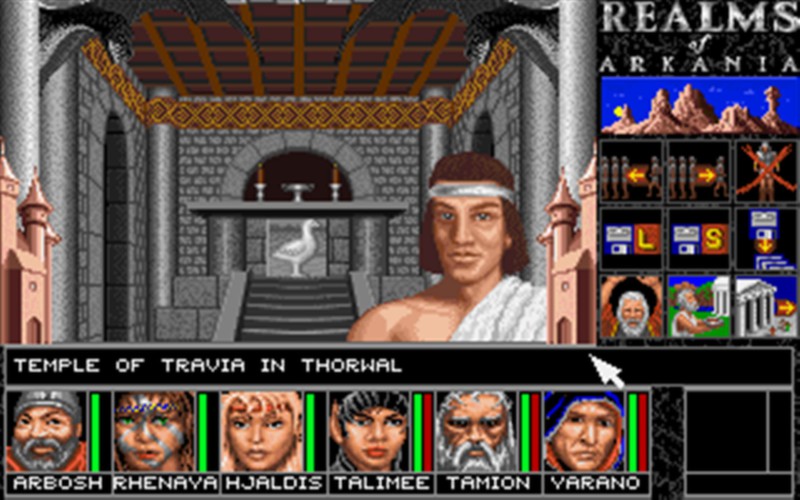 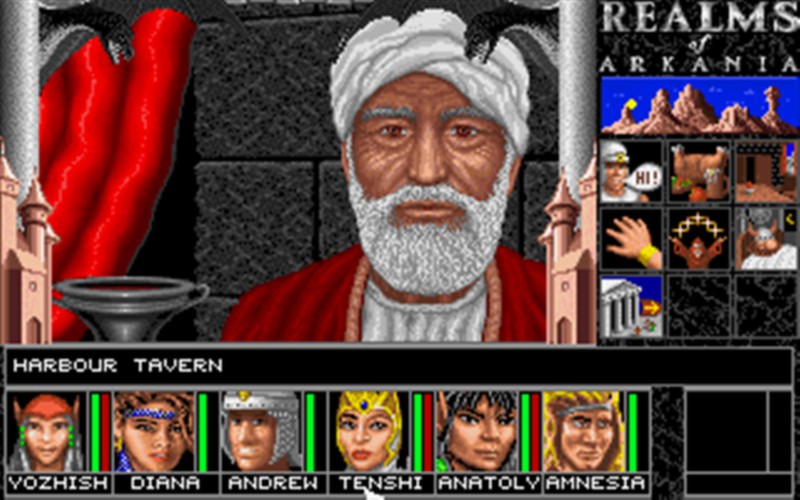 This game dates back to 1992, and boy, does it show! The graphics are basic, but they are without doubt not the worst feature of the game. It's the user interface that is too poor for words. Back in the days before Windows, there was no general consensus in how interfaces should behave with regards to mouse clicks. I find myself regularly stabbing at keys in order to try and figure out how to do something, and the music is just an irritation.

It's not that I am basing this opinion by comparing this kind of legacy game to newer ones. Instead it is just that the game lacks intuitiveness. When I play a game, I at least want some kind of tutorial in order to know how to do the basics. Realms of Arkania has none of this.

Unless you were a fan of the original, I would stay clear of this. It doesn't come close to games like Eye of the Beholder. There are better options out there. Perhaps the later versions will sort out a lot of the controls, but the first release is just weak.. Realms of Arkadia series does a great job turning a pen and paper Rpg into a video game. If you're into P&P RPG this game and series is a must have. If you want HD graghics and intense 3D battles with fast and furious leveling and rewards this is not for you. What you do get is a challenging game with a high sense of accomplishment.

Other games of the time did not go into the game management required by the Realms of Arkadia. Just covering the basic needs of food and water can be difficult if you don't select the right characters and skills. You must then place points into your skills when leveling or allow the computer to do it for you but not always getting logical reulults. With improperly placed skill points some skills will never be successful.

Not to mention casting spells. Of the 5 different magic using types each have their own strengths and weaknesses in spell casting. If you don't plan ahead some spells will remain unavailable or extremely difficult to cast, depending on spell strength, and Attribute score. which is also new to video games as most if not all games before simply required you to have enough spell points to successfully cast.

In other words, challenges that other games did not have and alot still don't.

Even if you don't like the video game you can print out the manual and sit down with friends and have a great time rolling dice and complaining how the game master hates you. Even if you do like the game it's always fun complaining how the GM hates you.
. Okay. First, this is an old-school RPG. By that I mean, anyone expecting modern bells and whistles will be VERY disappointed. Hardcore and old-school gamers will likely find it to be an engaging story with mechanics they may not be used to.. It's a classic hardcore detailed RPG. While Star Trail is the real shining star of this series, this is a great introduction to old school gaming. I have no idea if they fixed the bugs (save game destroying errors) from the original, so be wary of certain siutations such as starting a fire in the spider cave or gathering coins in the final tomb.

I'm a big fan of realism in my RPG, even when it can be frustrating. The idea of having to plan for weapons breaking, illnesses, cold and wet weather, equipment wearing out, as well as climbing and swimming challenges is something often overlooked in most modern games.

If you love all-inclusive details, where you build your characters from scratch and have to plan your quests tactfully, this is your game!. When you wanna think of games that haven't aged well, think of this.. RoA1 is complex RPG based on Germany's best selling pen and paper RPG "The Dark Eye". The game is very rough around the edges with stiff controls, repetitive graphics and micro management and instant kill dreath-traps; and yet the world of Aventuria is fun to explore and RoA is one of the few game series that tried to get the pen and paper rules as closely as possible onto the screen.

With the classic RPG party of up to six heroes (plus an occasional NPC) you have to travel through and explore the viking-inspired country of Thorwal to find pieces of an old map showing the location of a legendary sword. Find the sword to thwart the impending orc invasion and save Thorwal. The story is as simple as that - but it's not an easy task.

Travelling Thorwal is not a cakewalk. Find food and drink or your heroes will die of starvation or thirst. Gather herbs, brew potions and poisons or use them to cure death threatening diseases. Protect your camp or you risk enemy surprise attacks at night. Try to climb a mountain without a rope? Your party better have proper climbing skills or you can wave your heroes goodbye as the game cruelly hurls them down chasms to their deaths. Bottomless pits, rocky old boats that sink without warning - the game loves to kill you without giving you a chance. You better save often. Not enough? One wrong word may upset an NPC carrying one of the precious map pieces you're looking for and you will never get it. No second chances. Miss too many and you cannot complete the game (without the game telling you).

Towns and dungeons are explored in old fashioned 3D view \u00e0 la classic Bard's Tale and Ultima Underworld. Combat takes place turn based on an isometric grid. Traveling across the lands happens on the large map of Thorwal itself.

Over twenty years later there are many things that will turn gamers away instantly. The game gives you no quarter. But if you give it an honest chance you may find that exploring Thorwal and its dozens of villages and towns and numerous dungeons will be an adventure to remember for a long time to come.. I played this game on floppy disk on my Amiga 500. It had 13 discs and before every fight you had to switch between 3 of them (no the Amiga 500 didn\u00b4t have a hard drive). Never thought I would see this game on steam, but I\u00b4m really glad it made it.