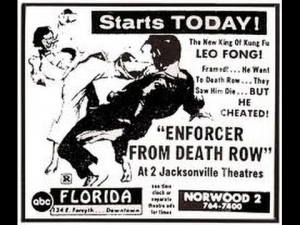 A former ranger sits in prison awaiting his execution when an international organization frees him and assigns him to crush a deadly spy ring.
Bare en ung mann kunne gjøre den jobben World Peace Oranization hadde å gjøre. Han måtte avverge en verdenskatastrofe som ble planlagt av en stor gangsterbande. Terroren og mordene utført av banden var horrible - ofrene ble spist av rotter og slanger, voldtatt, senket ned i tanker med etsende væske, brennemerket og slått til døde. (Fra baksiden av kasetten til den norske video version fra 80-tallet, utgitt av JEL Video)
A terrorist in Manilla named "Nomad" is extorting the Government for $45 million with the threat of unleashing a nerve gas on the population. The World Organization of Peace (yes, they have a sign that says W.O.P.) feels they can't send in a regular agent so they decide to use an innocent death row prisoner (Fong) about to be put to death. After an elaborate faked execution escape in San Francisco, Fong meets with the W.O.P. leaders and is sent to Manilla to stop this group. Before he leaves, the top guy says to him, "Have fun and stay sober." What?

That line about sums up this movie. For the first 45 minutes, this plays like two separate films cut together. But after that the characters from the two plot lines start coming together and you just realize it is really bad directing. Leo Fong, for whatever reason, is dubbed with a Southern accent. In the book Gods in Polyester, Fong claims this film was made for $50,000, which is relatively impressive I guess. Even more impressive is they made an action movie in Manilla without Cirio Santiago involved (and he claims they made a cool $3.5 million off it). The tape I have make a special point to insert a card saying "Special appearance by Cameron Mitchell" in the opening credits but he doesn't even show up in the short 80 minute running time. Can I coin the term "Camsploitation"? This is the worst kind of bad movie-boring! It is apparently at least two, maybe three different movies edited together to make one really bad, really dull movie. In movie one, there is an asian guy who is broken out of death row in a really dull way and sent to manilla to find some really dull drug dealers, and in the second movie, you have two extremely poor dubbed drug dealers who torture a varity of people in really dull ways. Meanwhile, the asian guy from movie one wanders around, characters come and go with no explanation, ninjas with pillow cases on their heads run about, a totally out of place rape scene is thrown in for no reason, and the absolute most boring car chase ever filmed is included in the mess. So boring it is not even worth checking out.