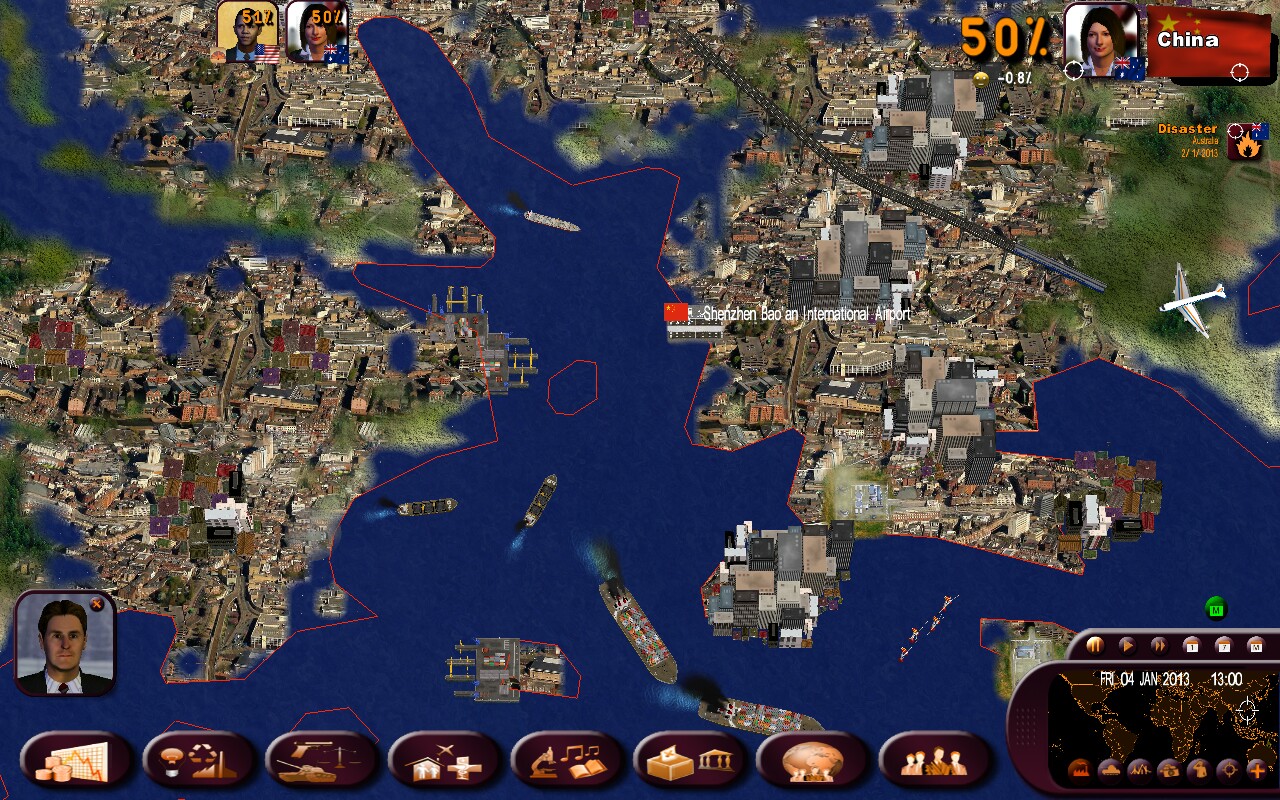 Discover the industry standard for geopolitical simulation of today’s world!
In Masters of the World, the third incarnation of Geopolitical Simulator, play as the head of state of one or more countries and expand your influence across the globe.

The game engine, Geopolitical Simulator 3, includes over 600 data elements for each of the 175 playable countries and calculates their changes in real time throughout the game based on players’ actions. Some examples include popularity ratings, political relations, and economic exchanges between countries. Various organizations, including NATO, use the technologies in the Masters of the World simulator for education and training.

For each of these areas, numerous laws can be proposed and must be voted on by the Parliament in order to pass. For example: setting social welfare benefit minimums, changing the retirement age, developing atomic weapons in secret, subsidizing the auto industry, hiring teachers, defining the powers of unions, setting speed limits on roads, regulating prostitution, creating an international film festival, etc.

Every action has its consequences. Lobbies, social groups, and leading national and international figures will intervene if their artificial intelligence finds it necessary to do so (interviews with the press, resignations, protests, strikes, roadblocks, wars...).

To prevent tension, the player can meet with any figure, or address the media (over 8 hours of dialog in the game).

Thanks to its intelligence services, the player also has an entire arsenal of spies and “special” ops. For example, he or she can - at his or her own risk - reveal scandals about another political party, dismantle terrorist networks, sabotage a foreign infrastructure, have an opponent assassinated, etc.

As the head of the military, the player can move all of his or her units around the map from their actual bases during military conflicts.

Note about the DRM: it uses an automatic and seamless activation at the first launch, then it can be played off-line if needed. It allows unlimited activations on three computers at the same time, plus if needed to migrate for free to other computers. So you'll never have to pay twice for the same licence of the game. The system allows future and backward compatibility with game add-ons plus upcoming upgrades to sequels of the game and access to our newsletters subscription. This also offers possibility to players having bought previously on other sites to migrate on steam and keep their add-ons. 7ad7b8b382 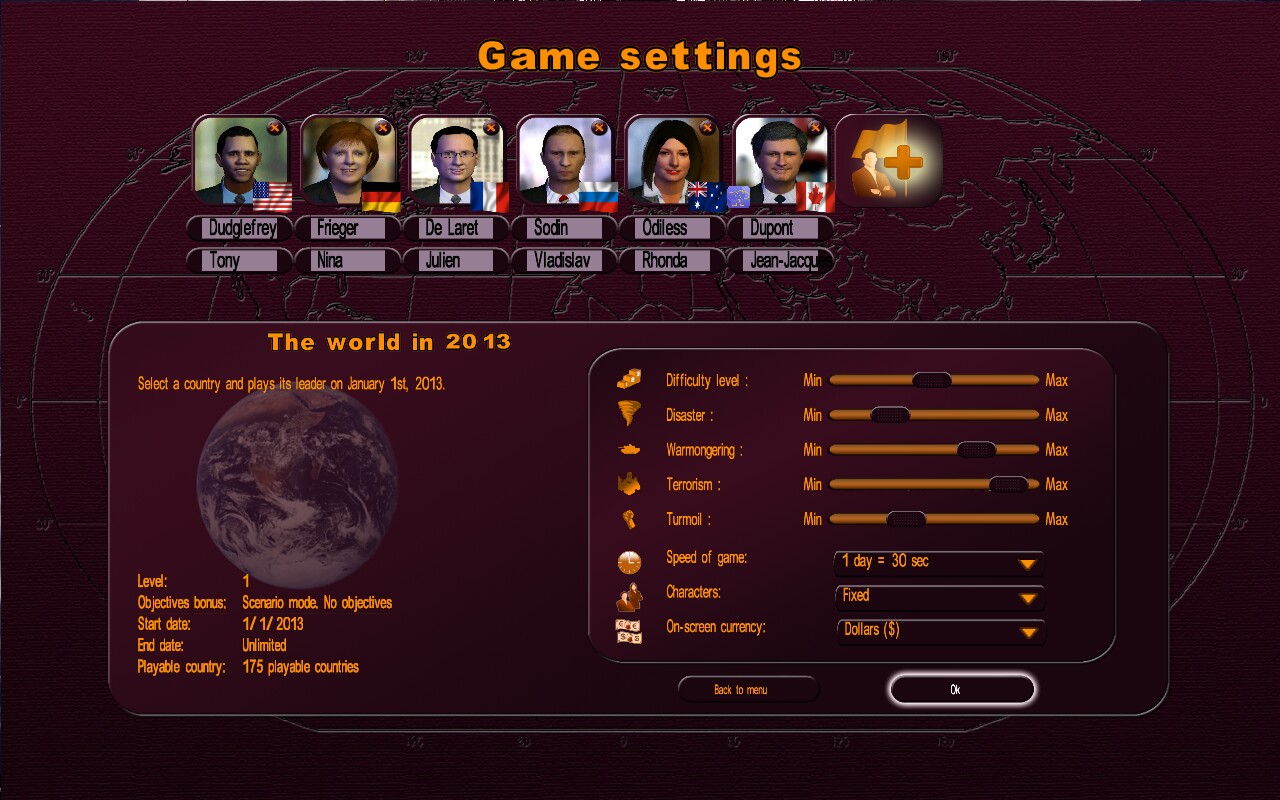 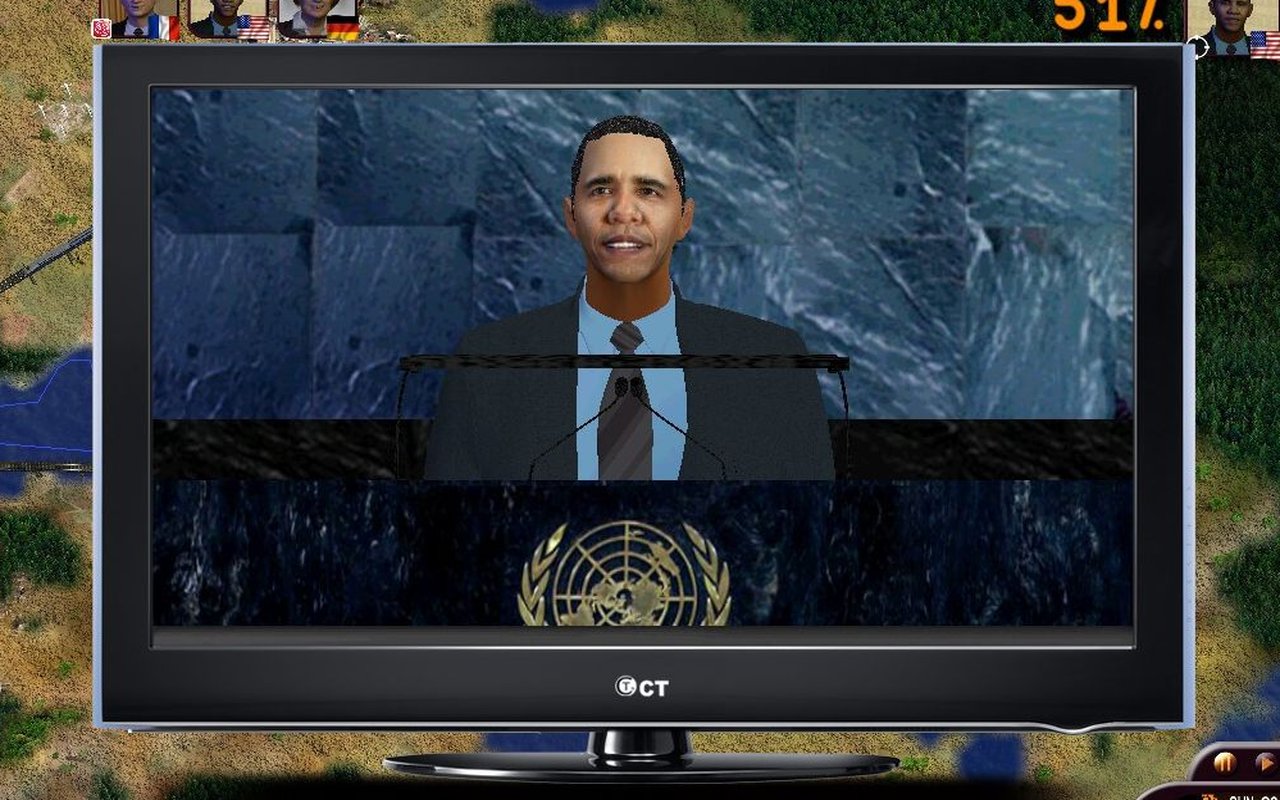 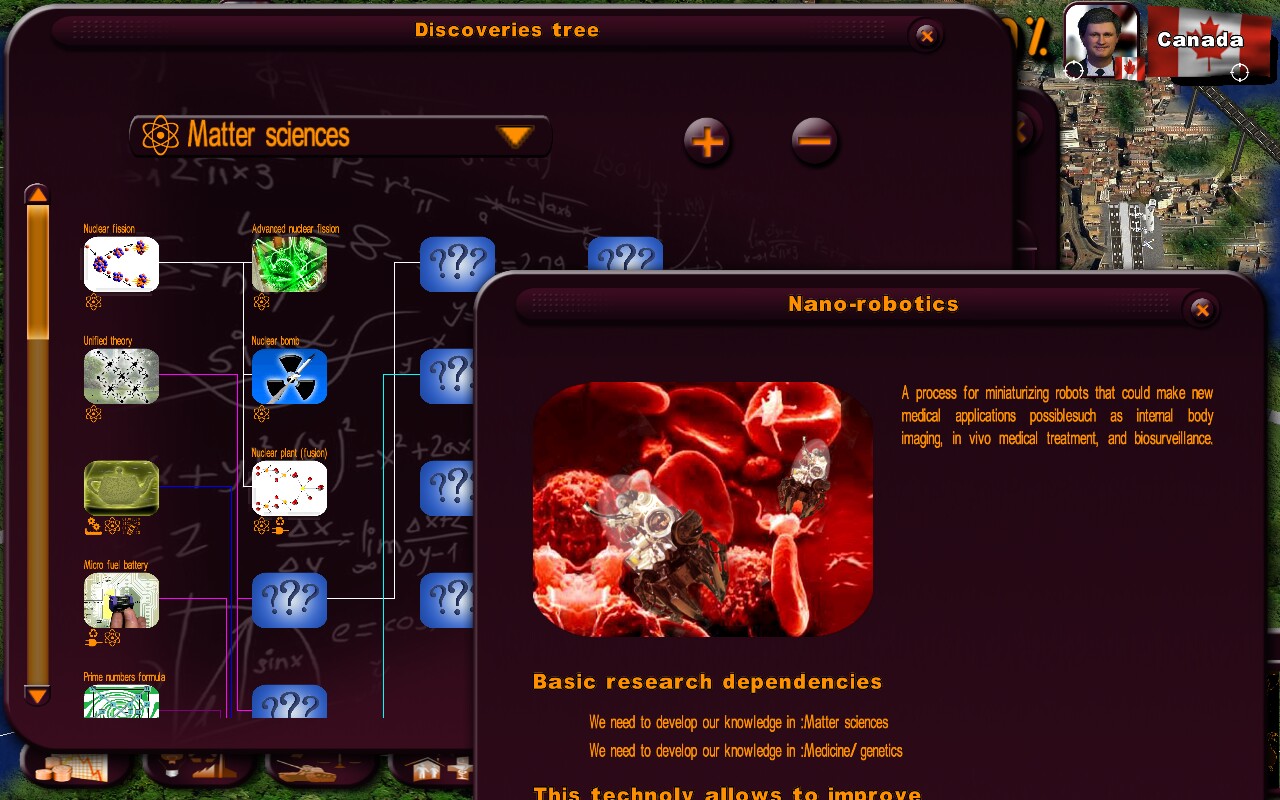 I've put in around 10 hours now, so hopefully this enables me to give a helpful overview of the game.

First of all, if you don't have time to read everything, I can honestly say that the game is not worth the current asking price of 50 EUR or your regional equivalent but I can recommended it at a lower price. Hope that helps.

For the rest of you, we can go into a bt more depth. Starting with the positives, I was very impressed with the amount of detail the game goes into - from currency unions to closing the borders the game has plenty of option to sink you teeth into. Where you'll find yourself somewhat frustrated however, is that many of the options are actually 'non-options' depending on the political slant of your party.

When you pick a nation, you are bound to the ruling party and it's politics and thus taking any nation with a clear bias toward the right or left of the political spectrum to the other side - or even the centre - appears to be very difficult. Aside from the effort it can take to push through policies in the face of rebellion within your own party, long term they can actually choose to oust you, regardless of your adherence to democratic principles or your level of popularity.

In my North Korea playthrough I discovered this the hard way. Despite the huge economic and social benefits of opening up the society and my unbelieveable 100% popularity rate, my party took me out and shot me at dawn with zero interference from my alleged millions of supporters.

Any significant change, even seemingly for the better can trigger widespread and disruptive protests which don't seem to subside all that quickly, even if you begin to introduce reforms that are being requested.

The interface is clunky at best, the game is not remotely impressive graphically, the voice acting is very off - my North Korean health minister had the most amazing, broad Irish accent - and, in the English version at least, emails and newspaper articles can sometimes make no sense whatsoever.

BUT, it is far from all bad. As stated above, you have a lot of options and can descend into dangerously geeky levels of play. aside from the rarer occasions when your actions trigger unbelieveable responses, the game is largely authentic feeling and your actions do have a satisfying weight to them. The ability to fight in real time, or even leave the nitty gritty to the competent military AI, is also very well executed and you have a great choice of options open to you upon victory, from annexation or colonisation of the defeated foe, to a regime change. Borders can be renegotiated and the espionage system is one of the best I've encountered.

Where this game is likely to excel though is in Multiplayer, the range of overt and covert actions you can take to destabilise, attack or prop-up your neighbours is truly wonderful and I suspect even more rewarding when the ally or opponent is a human being.

The raw data used for the core modelling seems pretty solid however, you can break the game and your own immersion from time to time so certainly do not expect the political modelling to be bulletproof.

Comprehensive modding support is built into the game and I would expect this to be where the biggest strides in improving the game will be made.

In summary, if you have friends to play against or a sincere passion for political simulators then this is worthwhile pick-up, but I urge everyone to wait for it to be on sale or you will feel more than a little taken advantage of. If you are a casual player or are considering this as an impule buy, I'd suggest giving it a wide bearth or picking up the excellent and polisihed, if far less detailed - Civilization IV or V.. Doesn't work. Access Violation on startup. Hope I can get a refund.. Doesn't work. Access Violation on startup. Hope I can get a refund.. Pretty terrible. Besides basic graphical elements missing like mouse scrolling of the map, the economic modeling\/decision making is aweful. Interest rates and trade contracts? Really? That's essentially it? Sure it's fun to buy essetentially useless tanks and power plants for a decade while you watch your economy\/budget freefall every time. Even the IMF is unrealistic--as Turkey they forgave me 300m in debt just because I was running a budget surplus. Their message was basically here's your reward for balancing your budget...what?<\/a> The IMF in reality will only forgive debt they know they're never get back anyway. If you can pay, they'll take every bit they can get. Lastly, political instability is a joke. Playing as several African nations in sequence, I was overthrown by the healthcare syndicate (WTF?!?,) forced out of office while I had 100% popularity, had two military coups, and was conquered by Ethliopia (granted playing a Somolia) ALL WITHIN THE FOR 30 DAYS OF GAMEPLAY!!! Well, wasted $50 here writing this only so others can avoid the same thing. Go buy a Paradox Interactive game for a lower price and get a polished, fun game...and not have a bunch of doctors run you out of office when you have all the guns.... *Even at the updated price this game is still not worth it* July 24.

I really enjoy this game, don't get me wrong. And i've put a lot of hours into it, because the concept of the game is absolutely amazing. However I cannot give this a positive rating at this time. The game is riddled with bugs, sometimes game breaking. It could be a bug causing your country to go bankrupt, or maybe it'll cause you to have excessive inflation, or causes a breakdown in the correlation between the decisions you make and the ingame economics.

Instead of fixing the game crippling bugs, the developers ignore all the issues and have created Geopolitical Simulator 4. Because they've done this instead of fixing their game (which should really be in beta release, not published as a completed game), It has caused this 'game' to not feel like a game. Instead it feels like I have been robbed of my money.

I feel like I gave this game a fighting chance by paying full price, hoping that by supporting the developers it might encourage them to fix the bugs. I was wrong. Save yourself the money and don't buy this broken game.

I'll change my review if the developers ever release a patch that fixes even half the issues of the game.. Ok, first things first, this game is fun. Since political simulation games are a rare species, and this is one of the few of them, I normaly would recommend it to everyone who likes this type of games. You really have to work to have your plans work out, no matter if it's economic grow, demographics or military expansion. Especially the latter is hard to achieve, since you have to fight bad publicity both internationaly and intern. The gameplay is very deep and it's very challenging to achieve your goals.

The graphics are decent. Not good, not bad, but still enough for this type of game. As for sound, that's ok too. I dunno if it's a bug, but I hear the music of other games while playing this one (Distant Worlds).

The only reason why I don't recommend it is the simple fact that it has DRM. So you're not only limited to buy it on Steam here, but also have limited activations and... hell, I just hate DRM. Way to go, thank you Eversim. Unfortunatly I haven't read it, else I wouldn't have thought about buying it.

Decent Game, a little buggy, but fun. I'll give it a 7\/10, because I like the genre and since this game is a rare specimen... and subtract 7 points for the DRM. That's 0\/10 for you, until the DRM is patched out. As soon as that is done, I'll make a recommention.. windows 8 32bit not supported!!!!
exception_access_violation error
\t
you are deceiving people