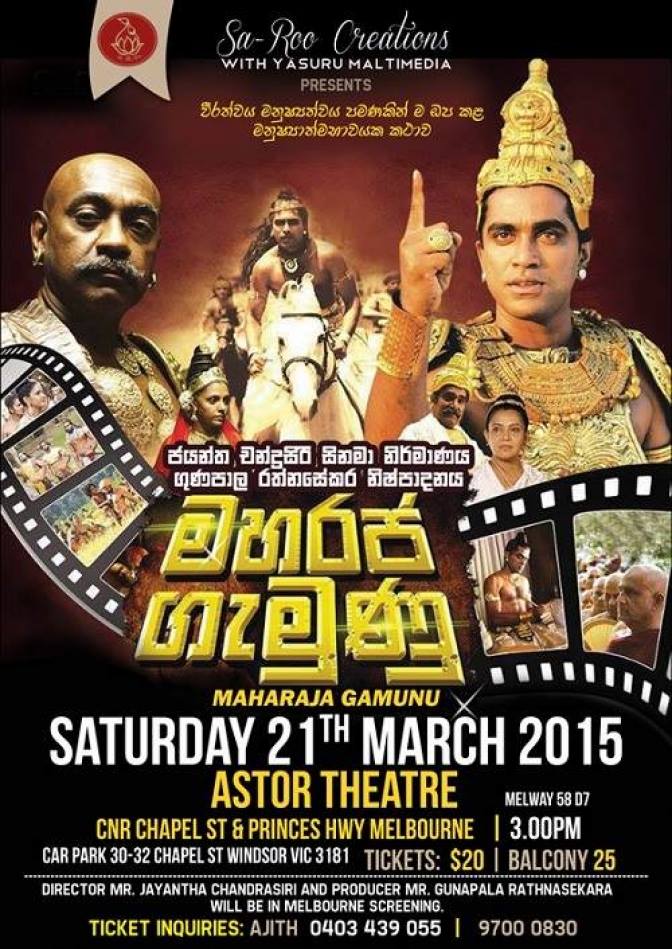 Dutugamunu also known as Dutthagamani and Gamani Abhaya ("fearless Gamini"), was a Sinhalese king of Sri Lanka who reigned from 161 BC to 137 BC. He is renowned for defeating and overthrowing Elara, the usurping Tamil prince from the Chola Kingdom, who had invaded the Kingdom of Rajarata in 205 BC. Dutugamunu also expanded and beautified the city of Anuradhapura and projected the power of his native Rajarata region across the island of Sri Lanka.
Same as the other films done by Mr. Jayantha Chandrasiri, this film is also great. This is a "must watch" film for those who are not aware about our history. This is a family movie. All the artists have given their full justice to the characters in the film. This is not a cheap film!The director has given a consideration for each and every aspects of the film. The music is also great. Mr. Chandrasiri has selected best locations for shooting. I really like the first 5 minutes of the film. Comparing to the other historical films- this film is in the top. If you go to watch this film please select a good theatre with a good sound system.
Watched twice within a week... and will watch again next weekend. The best I've seen on SL cinemas. An extraordinary cinematic experience. It's not just a chronicle movie but the untold proud story of a heroic nation with full of humanity. The story of a nation tamed by the great philosophy of Buddhism over centuries. The 2 1/2Hrs movie is a must watch by every Sri Lankan... especially the youth and school children. Special merits to the director Mr.Jayantha Chandrasiri, producer Mr.Gunapala Ratnasekara and the team behind of this massive budget - 180 million movie Maharaja Gemunu, for this historical effort. You guys have re-written the history of SL cinema... Simply Amazing!!!