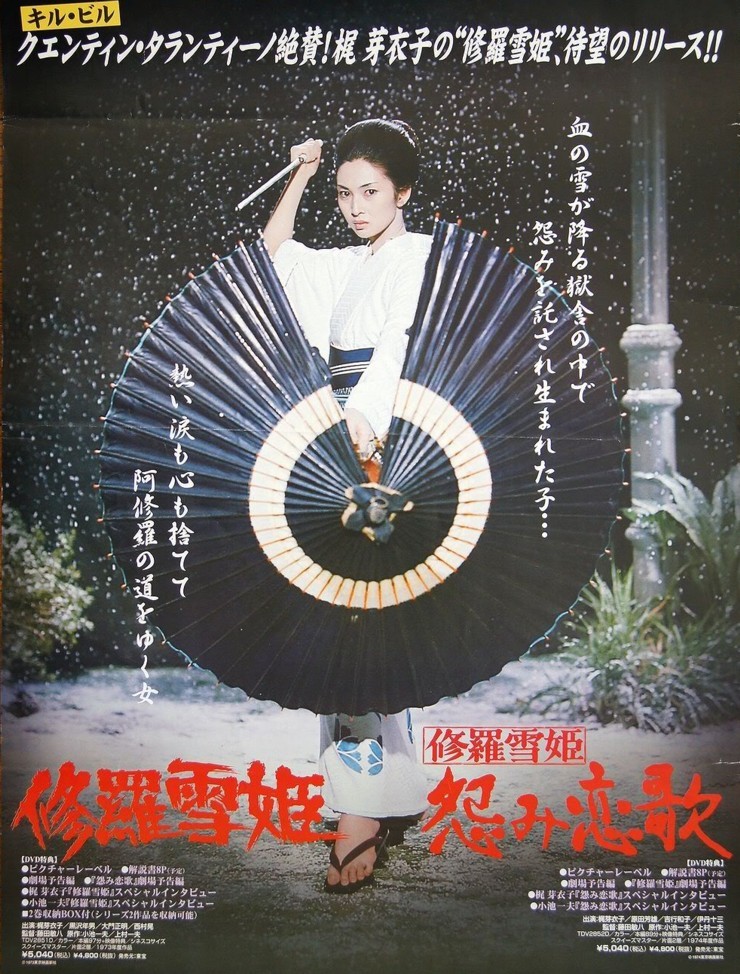 A young girl is born and raised to be an instrument of revenge.
Yuki's family is nearly wiped out before she is born due to the machinations of a band of criminals. These criminals kidnap and brutalize her mother but leave her alive. Later her mother ends up in prison with only revenge to keep her alive. She creates an instrument for this revenge by purposefully getting pregnant. Though she dies in childbirth, she makes sure that the child will be raised as an assassin to kill the criminals who destroyed her family. Young Yuki never knows the love of a family but only killing and revenge.
This film and its sequel are the inspiration of Quentin Tarantino's "Kill Bill" movies. Having seen the Taratino films, it was very obvious that he based his film on the "Lady Snowblood" films because the plots are very, very similar. Now this is NOT a complaint--and the Tarantino films have a style and artistry that puts them in an entirely different league.

The film is told in a non-linear fashion. You eventually learn that the lady, Yuki, is the product of a very, very strange and horrible series of events. It seems that before her birth, her father and brother were murdered and her mother was beaten and repeatedly raped--all by four evil dirt-bags. As Yuki's mother was soon imprisoned and was dying at Yuki's death, she instructed her friends in prison about an elaborate plan for revenge for the destruction of her family. It seems that once incarcerated, the mother deliberately slept with every male she could in order to become pregnant--just so she could give birth to a child to carry out her revenge!! This inter-generational revenge tale is truly bizarre and original. After the mother's death, the child is trained viciously by a crazed priest--and made into a merciless killing machine.

The second half of the film concerns Yuki tracking down three of the four evil scum who destroyed her family (the first had already been killed by her mother). One by one, she tracks them down and coldly dispatches them to Hell. There are many twists and turns along the way and it's all done very stylishly and with HUGE amounts of blood and gore for a 1970s film.

Overall, the film has excellent acting, a wonderful and original story as well as fantastic direction. Do not expect a film exactly like the Tarantino one (it lacks the amazingly cool sound track and the body count of this one pales compared to "Kill Bill: Part 1". For fans of Tarantino or martial arts films, it's a must see--and is among the best films of its genre. Masterclass in the Art of Bloody Violence - but violence with a purpose . Direction within the violence , and excellent direction in the story as a whole.

Based on the Lady Snowblood manga by Kazuo Koike; a child is born an asura, born for the sole purpose of avenging her family's murder and humiliation by four bandits. Born to a mother serving a life sentence on murder, and cared by a strict priest honing her assassin skills, she has all the tool needed to carry out her mission - a long bloody tale that drags police, a news reporter, brothels, and rivals , blood sprayiage everywhere all in the name of her mother's honor and redemption.