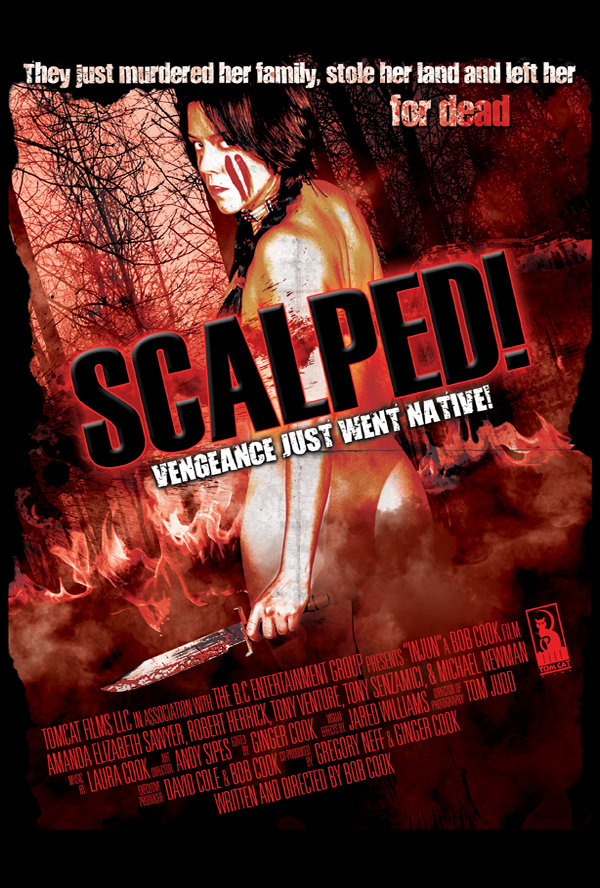 When six raiders kill her husband, child and workers on her ranch, a white woman raised by the Commanche' claims an Indian blood rite.
The premise is straight out of a pulp cowboy novel. Near the end of the Civil War, CSA deserters running south through Florida come upon a small homestead managed by a white family and local non-descript Native Americans. The bandits kill the men and rape the women, leaving the most attractive woman alive, naked, and staked out on the ground. At night, a traveling prospector-type comes along and rescues her. Together, they run off into the woods and set up a small camp alongside a river. The squaw, played by Debra Cassano (in a case of white-girl-gone-Native-American) returns to exact her revenge. Afterwards, she baths in a river during a rainstorm to wash away the sin and purify her soul. Or something like that.

Cassano does a fair job and should be congratulated for her bravery in filming the rape scenes and the river scene. She's cute and does a so-so job in delivering her lines, but is hamstrung with poor dialogue and a weak surrounding cast. The "retarded bandit" is an old stereotype that doesn't deserve screen time, and the actor playing that character could easily have been the leading man instead. The actor playing the prospector also does a fair job with his material. The others... not so much. This had the potential to be a cult classic but failures in cinematography, editing, and dialogue ruin any chance of that. This film has the vibe of something a group of film school students would put together as a graduation project, and the fact that it was filmed in Florida (the UCF film school and the Full Sail film school are both in Orlando) makes me wonder if that's isn't exactly what this is.

This film is also known as "Scalped" and is available on DVD while supplies last. If you're a fan of Indie community films, this makes good filler, but remember to check your big-studio aspirations at the door. SCALPED! is an indie rape revenge thriller about a Native American girl who is attacked and left for dead by a group of settlers, leading her to take violent revenge upon them. It's a traditional type of storyline, one that's handled in a not-awful way for an independent movie, and the settings and costumes are fairly authentic. However, the acting is lousy, both from the victims and the main protagonist.