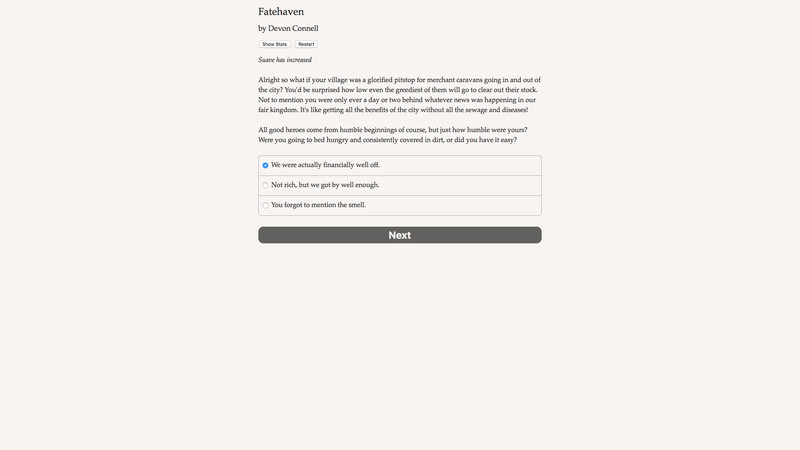 What kind of mage will you be?

"Fatehaven" is a 110,000-word interactive fantasy novel by Devon Connell, where your choices control the story. It's entirely text-based--without graphics or sound effects--and fueled by the vast, unstoppable power of your imagination. d859598525 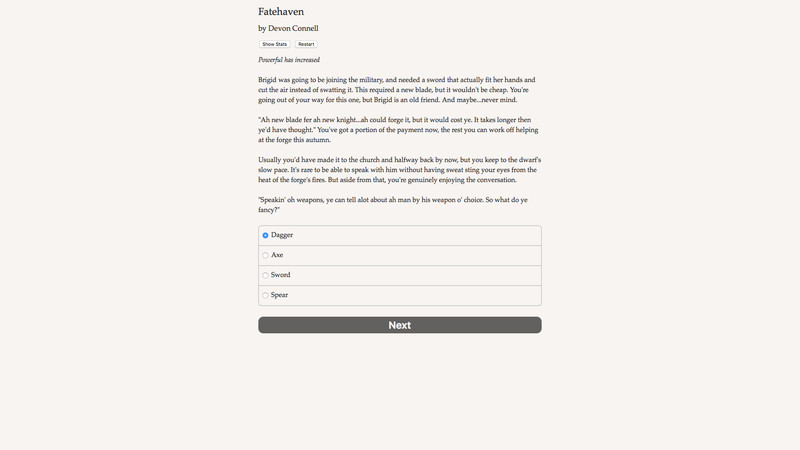 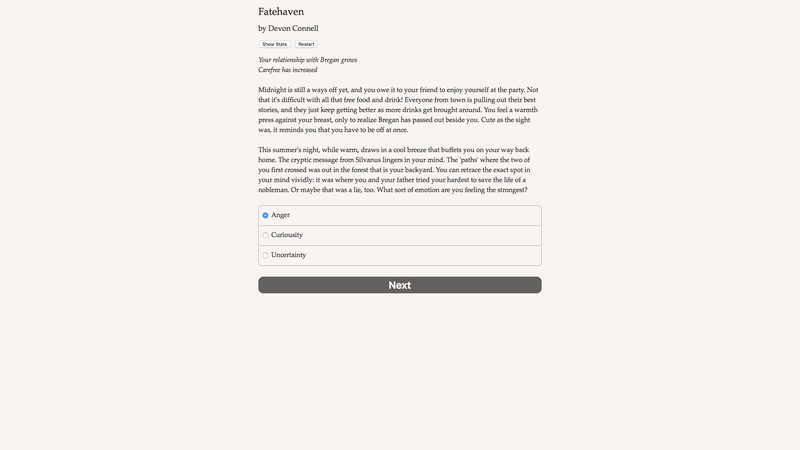 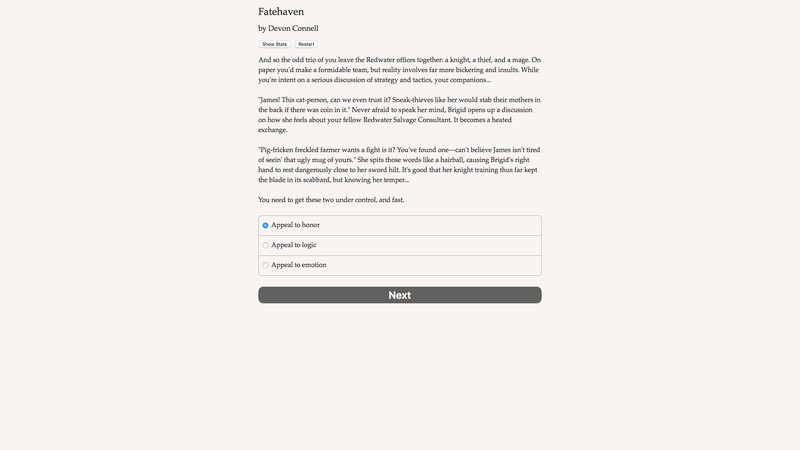 The writing is witty and interesting, combat is well described and.. so far, I haven't skipped a word written, which is borderline a miracle considering I always skip segments when I read, even on " masterpiece" books and story games ( like planescape).

I even had to stop reading for about minute when I couldn't stop lauhing at certain insult scene, something I don't remember doing due a written story for a long while.

Only reason I write this review early ( just hour or so reading) is because someone labeled the ( so far) best written text\/story adventure book ( I have read) a negative review just because he didn't read the shop description and was dissapointed due lack of graphics.

This interactive novel doesn't deserve that label, stuff like that hurts an author that has put out a genuinely fun to read story at ridiculously cheap price considering the amount of re-readability it has.

Update<\/b> : The story milds down bit in the end and there are lot less meaningful choises I had hoped, some events that can seem shocking ( start from beginning level shocking), are scripted and can't be avoided, which is bit dissapointing.

Overal I still recommend it, worth the price.. Rescued an elf girl. Got sidetracked by her body.
Learned magic was real by said elf girl.
Got trained in magic by elf girl.
Found elf girl was daughter of an lich. Would still tap elf girl.
Best friend tried to kill elf girl. Punched best friend in face.
Village massacred by paladins.
Learned it was partially best friends fault.
Choked out best friend while surrounded by an inferno.
Spared best friends life.
Killed an orc by shoving spear up her\u2665\u2665\u2665\u2665\u2665
Left husk of an village.
Went to city.
Became an mercanary.
Found a CAT GIRL! Got sidetracked by CAT GIRL's body.
Sidequest happens.
Burned down a chapel while proclaiming god is the devil, and all paladins are demons, and floating in mid-air with cape fluttering dramatically.
Took saved maiden to hotel.
Maiden becomes an succubus.
Chokes out bad-touch succubus. Try to bash succubus' head in with bed.
Get stopped by CAT GIRL!.
Get told to help royal family's adviser.
Arrive at villa.
Find out adviser is a weird blue skinned elf thing that also has magic. Also get sidetracked by her body.
Engaged in MORTAL KOMBAT with demon lady. Killed her with her own magic.
Leave to find elf girl and save the day.
CAT GIRL and best friend from village join me.
Both of them die in the tower.
Get to top of tower and find final boss.
Kill final boss by literally exploding his lungs from inside his body.
Find out elf girl is behind everything.
Find out real reason for everything.
Meteor kills everyone.
Get sent back in time to the beginning.
Fix everything.
Become the avatar.
Destroy an invading army in 5 seconds.
Tell King to stuff it.
Find Cat Girl again.
Seduce Cat Girl, and make her mine forever.
Become an saint in death.
10\/10 would become an pshychotic mass murdering-stalker again.. Okay, so the game\/story is interesting and all that, however I can NOT enjoy it... simply because... the way it's written, you never know if the MC is talking or thinking! Should add some god damn quotation marks for the MC!. Was this book well written? Yes. Did I enjoy it, not really. Th biggest problem was that there were no actual choices, just guesses as to what would be most successful. Second biggest problem, WALLS OF TEXT EVERYWHERE!!!!! Seriously, there seemed to be about ten paragraphs worth of text between choices after chapter 3. Chapters 1 and 2 are fun because you are actually making choices frequently, but because I wanted to make choices more than reading, I found less to enjoy about this book.. During my first playthrough, I was thinking I'd come here and give a recommended review for sure. The story was pretty good, even if you are constantly assumed to be a pervert... but playing through it a second time made this an easy not recommended review unfortunately. I play Choose Your Own Adventure style games like this because I like to have the choices and see the different ways everything can resolve. Sadly, most of the 'choices' in my second playthrough (Where I was choosing the opposite of what I did in the first playthrough of course) quickly turned in, "You realize that's a bad idea and do the other thing." That kind of illusion of choice then forcing me to do what I didn't choose really annoys me.

So, if you only play the game once, I'd consider it. If you're like me and play it through many times to see all the different endings, don't bother.. Ten out of ten, ten out of ten, hundred out of hundred.
Best game.
B e s t g a m e.. I'm afraid I can't recommend this product. As the author of Fatehaven seems to have missed the point of interactive novels, namely the part where they're interactive. I will admit that I haven't finished the whole game, as I'm hoping to get a refund, but judging by the first four chapters, the story flows more like a novel, and, to be fair, is well written and enjoyable. But that's undermined by the fact that the 'decisions' you make in this story have little consequence outside of choosing the gender, sexuality and name of the MC.

Otherwise, all choices lead to the same conclusion, with a little varying dialogue beng the only real difference between them. Entire pages will pass by without a single decision at all during the "serious" moments of the story. Your characters personality is also set in stone, with them constantly being a pervert (which can get kind of annoying) or automatically having certain opinions on things.

But the biggest example of how linear this game this would have to be the inclusion of the "corruption" stat. As the name implies, it determines how evil your character is, starting at zero, but steadily rising the more you kill people, or the more people die. There's only one small problem, as listed above, none of your decisions matter, so the corruption stat will simply raise automatically, independant of any choices you make. No really, mine rose from 0 to 20 during one of the earlier mentioned moments where pages pass without there being any decisions from you.

Worse yet, is the illusion of free will they try to create in the game. For example, in battle, you have two choices, kill the opponent with X, or kill the opponent with Y, that's it (Either choice raises your corruption level, btw). Why not have an option to knock them out or restrain them? Especially if you're going to have this "corruption" stat be a part of the game, you could have choosing a non-lethal option lower it instead of raise it. But no, that's too much interaction for this interactive novel.