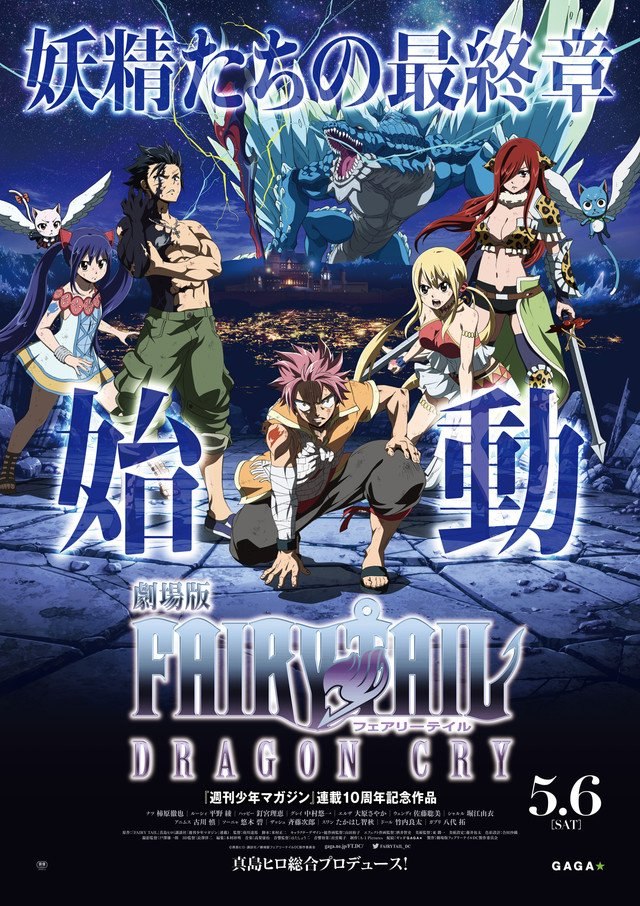 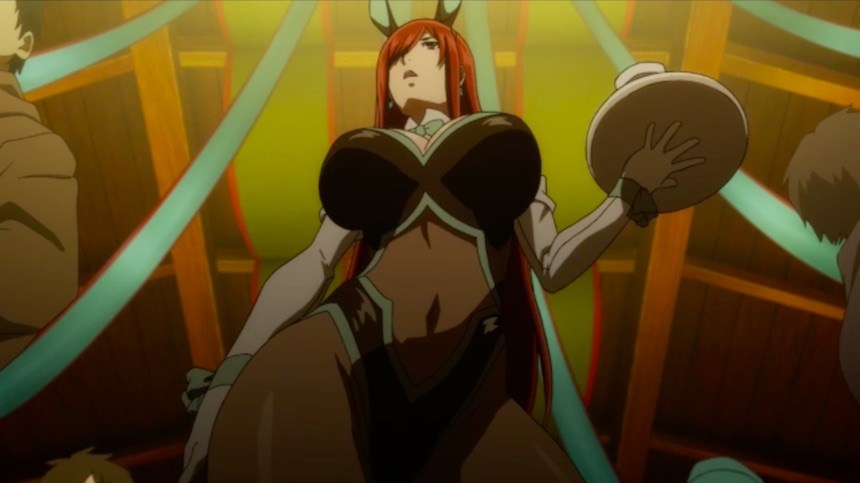 "Dragon Cry" - it's a magic artifact, that power can destroy the world. For a long time she was kept in the Kingdom of Fiore, but in the end was stolen by the Kingdom of Stella. The main characters (Natsu, Lucy, Gray, Erza, Wendy, Happy and Carla) penetrate into the Kingdom on a mission undercover. In the end they will have to deal with the King Animus and his entourage (Zach and Sonya). The purpose of the Animus to enslave the world? And Sonya was secretly trying to save the country? Expect exciting adventures on the sea of intrigue and save the world.
In the new film, based on the Hiro Mashima's manga, Natsu Dragneel and his friends travel to the island Kingdom of Stella, where they will reveal dark secrets, fight the new enemies and once again save the world from destruction.
A confession from me, I only got attached to Fairy Tail for less than a year, but it is undoubtedly one of my favorite anime of all time. That being said, I returned watching the English dub of Fairy Tail: Dragon Cry, and it was entertaining enough that reminded me how much Fairy Tail means to us, despite having a rather formulaic plot, excessive use of sex appeal and under-developed characters.

For anyone who has yet to see the film, this will be a heads-up, not a spoiler: while it is never explained, the film is technically canon, taking place right after the Avatar arc and before the Alvarez Empire arc. Keeping that in mind, there will be moments that leave you confused had you not read the manga. I advise you to look into the Avatar arc prior to watching the film.

Personally, the film was a nice way to fill in the gap between Fairy Tail's end in 2016 to get fans hyped up for the final season set to arrive 2018. So I will admit this, I did enjoy Dragon Cry more than Phoenix Priestess, but only by a little. There seemed to be more 3D implemented in some shots, but the animation feels more realistic and cinematic, versus Phoenix Priestess' where the animation is cheesy and ridiculous. I also think Dragon Cry had a nice flow of consistency within the story line, even if it felt like an extended episode, whereas Phoenix Priestess was treated more as a spin-off, and it's not even canon, although people have said it fits best after the Key of the Starry Sky arc.

Of course, there are still cons to this film, as it is the case for everything. A lot of the Fairy Tail characters were thrown into the film for no exact reason, much to my dismay. I'm still wondering why Gajeel, Pantherlily and Levy were there in the first place. There also seems to be quite more sex appeal compared to the episodes, or barely enough development in the characters. Lucy dancing or Carla in her human form or Erza hardly showing her true strength as an S-Class wizard, or a lack of traditional trademarks of certain characters (I won't say who). At least there weren't as many unnecessary characters as Phoenix Priestess.

What's more is that the film felt rather choppy, but whether it's from poor editing or poor directing is hard to say. Even so, it definitely felt rushed, almost as if the creative team was falling behind on schedule in making the film. What I also miss from the series that the film lacked is because of a lack of development, there isn't enough emotion or heart in the characters to actually give them any push or strength. The fact that this is cut down into around 90 minutes, versus having 20 23-minute episodes to make a complete arc.

Additionally, I was hoping that Dragon Cry's story would offer more piqued interest for fans, only to learn that it felt too familiar, though I will not reveal what made it so cliché. Even the promotional trailers suggested we might learn of Natsu's dragon instincts coming to life, but that's only marketing tactics, and you have to be careful about what you reveal. I actually thought we might learn a little more about Natsu's backstory, but I think we know enough already about our Fire Dragon Slayer. It does set up nicely for the Fairy Tail finale, but we still have a while to wait before hitting the screens.

Overall, Fairy Tail: Dragon Cry felt more like a Hollywood film with a lack in strong characters, overuse of unnecessary things and low use of development. It felt like watching "Spectre" of the James Bond films, how it shows us what we already know about the series. I think I could have given a lower rating according to my review, having a bit more cons than pros. However, I found it to be enough entertainment to emphasize how much I enjoy Fairy Tail not just as a fan, but especially as someone who can relate to the characters.

So is it worth watching? I can't be the judge and speak for the majority, but what I can say is that I think my seven bucks were well spent. Besides, who doesn't get goosebumps listening to Yasuharu Takanashi's theme song during the climax? I'm a fan, I stopped reading the manga so I wouldn't be spoiled watching the animé. I was very disappointed after it was all over. It was like they cut and pasted fairy tail episodes to make this movie. Hear what the post credit scenes was better than the entire movie. So skip to that you won't be missing anything special. What a waste of 1hr 25minutes.