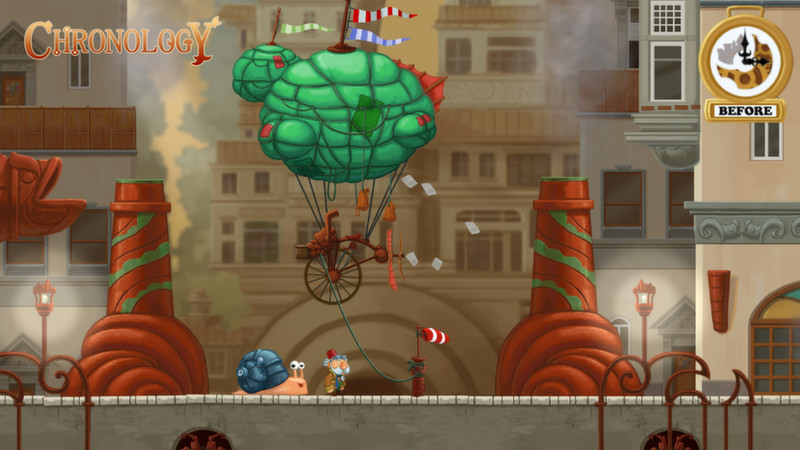 Chronology is a mind-bending mix of puzzle, platform and adventure where you defy time by manipulating the past and the future, in order to fix the present. Play as the Old Inventor and his sidekick The Snail, and take advantage of their special abilities - travel back and forth in time, stop time, manipulate objects and solve puzzles.


• Time changes everything - Solve puzzle by travelling back and forth in - or freezing - time.

• A magical, colorful, vibrant and living universe that mixes elements from different times and cultures. 6d5b4406ea 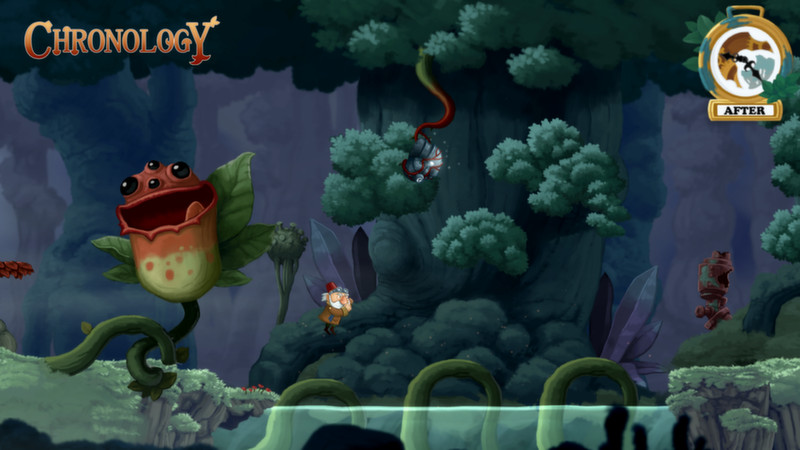 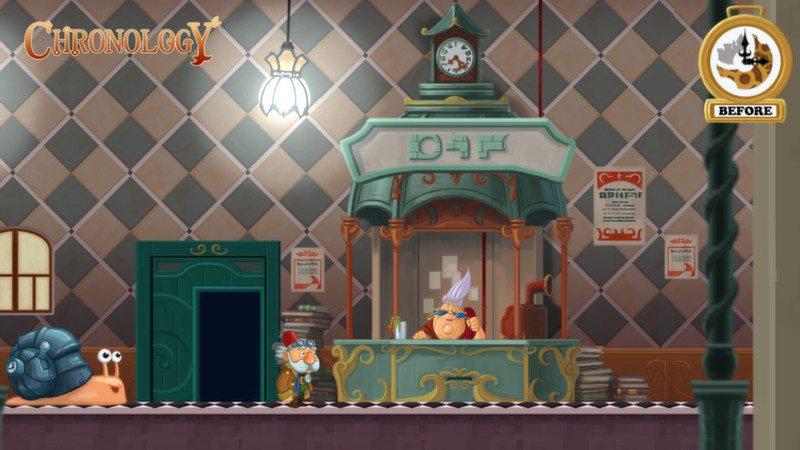 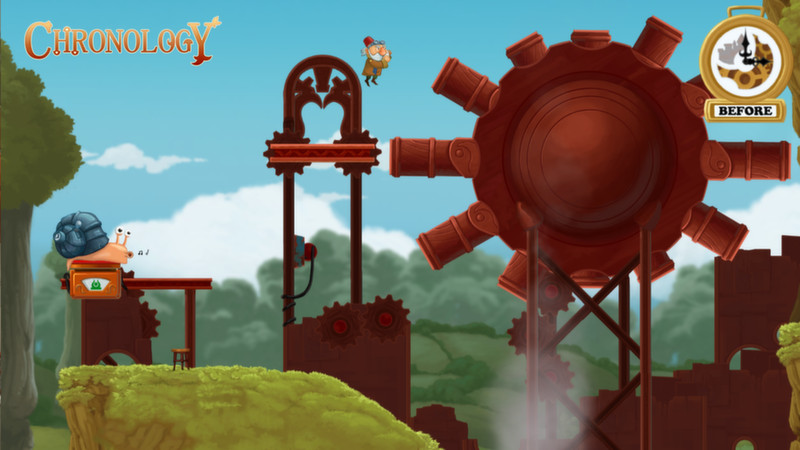 
This game lets you take a plant from the past and plant it in a different spot, so that you can travel to the future and climb on it when its a full grown tree. 10/10.. It's as timey wimey as it gets. My favorite part of this little game is when I break old geezer's leg in his childhood. Meh, he's a minor character anyway and sacrifice was needed in order to save the world. I can't help but compare Chronology to The Silent Age (another timey wimey game), and in my mind a game like that shouldn't be too easy like The Silent Age. Chronology has everything: good puzzles, rememberable characters, sacrfices, anti-hero and a deadbeat villain.. Steam says I never played this game, but I remember finishing it and crying and then talking to the voice actress for the snail on Facebook. Steam why?

Anyways, yeah. It's a good game. Short and sweet.. Not a bad game, and certainly better than most of the puzzle platformers I've played recently (looking at you Logigun and Gateways). It it super short, only about 2 hours. The art and music are nice. I honestly couldn't tell you what the story was about, as it was pretty bare-bones, not captivating, and didn't make much sense. The voices of the characters are not fitting, especially the snail, which sounds like an 5 year old boy for some reason. There are multiple bugs. Items you have to use get stuck on your snail and you cannot pick them back up, making progressing impossible. This problem is furthered by the fact that there are no save points, if you quit the level you have to do the entire thing over. Luckily levels arent that long. Another big is sometimes things that should be interactable aren't, leaving you to spend some time switching time and hoping that it fixes itself. The other biggest problem is with puzzles. While many are cool and intuitive and make nice use of mechanics, some make no sense. Most of the time it's because you didn't know that object that looked to be part of the background was interactable. In one instance you're supposed to know that a light in the background can be jumped next to and that causes it to be knocked down, even though that's never happened before in the game, and there are other similar looking lights in the room but one is just usable for no reason. Usually when I looked up solutions I thought "well how was I supposed to know I could use that, or that it would do that to that object, that has never happened earlier in the game and that's not reall reasonable", or "that looks like the background". Also the platforming isn't that great, as your guy moves super slowly and jumping feels like he has lead weights tied around both ankles. Most of the jumps you have to make take multiple tries and you may just BARELY make one time even though you were standing on the very end of the ledge, and you just barely landed only half way on the other ledge. All in all its a cute fun little game. Wish the puzzles made more sense or were more obvious that what you had to do was even an option. 6.5/10.. I can't say anything bad about this game. It is a bit short but the atmosphere and the artstyle, sondtrack and the puzzles really keep you interested for the runtime of the game. But regarding the run time... maybe wait for a sale :D
Have fun. I liked that this game kept it simple, short and sweet.

Good puzzles, a bit easy for the most part -but it also made for good pacing without dragging on and overdoing new gimmicks like many other puzzle platformers.

. Beautiful atmospheric and fun Chronology is not far away from being a really quite excellent game. Unfortunately, the story isn't strong enough to carry it and it ends just as the puzzles are really hitting their stride. So well worth a look but maybe wait for it to pop up on the Steam sale.. Chronoglogy' is quite a gem. An expertly crafted platformer, the game boasts a beautiful art style to complement its sharp gameplay. The story is simple, but effective. An unnamed, elderly inventor is determined to find his shady mentor after one of the pair's contraptions causes apocalyptic destruction. Along the way, the inventor encounters a friendly snail with the ability to freeze time. Combined with the old man's penchant for traveling from past to present, the slimy companion introduces a unique gameplay structure.
The player alternates between the two characters in order to solve brilliantly designed puzzles oriented around manipulating time in order to alter the landscape and circumvent obstacles. The snail's shell serves as a movable platform that can be used to cross gaps, sawblades can be halted in mid-air, and impassible walls in the past become ruined structures in the present. Switching time periods in the middle of a jump can turn certain doom into a saving ledge or platform. These basic mechanis build and combine in interesting and challenging ways as the levles progress. One particularly creative head scratcher involves multiple time switches, an anvil, and flaming cannonballs, all to simply open a door.
The game's visual design is superb. Colorful character models and environments seem to pop off the screen. The bright wimsy of "before" transforms into the dark, dilapidated melancholy of "after." The contrast underscores the narrative's focus on regret and the consequences of terrible decisions. Puzzle construction also reinforces this relationship. In one of the game's shining moments, a decision made concerning a young child in the past has subtly profound implications in the present.
While the time spent in "Chronology's" world is welcome, it does not last forever. The entire experience can be completed in around 2.5-3 hours, leaving the player with a distinct-- and regrettably brief--brush with greatness. Osao Games should be commended for this effort, a game that merges artistic integrity and ambition with incredibly enjoyable platforming mechanics. Warning: "Chronolology" also contains blatant disregard for the laws of the space-time continuum.
Score: 9/10

Chronology offers some interesting mechanics with it's two different playable characters and it's time manipulation. It's sad to see these not being used in very many intriguing ways though, as most of the challenges seems to be simple challenges, solving mild inconveniences in your path towards the right side of the screen. It does shine at times when it slows down to present you with one of its more inspired puzzles, requiring you to use your full arsenal of time-controlling powers. The world is made more interesting by its wonderful art style and lovely music, making progression through it's short 2-3 hours a joy for eyes and ears. I only wished my brain felt as stimulated afterwards.. A cute puzzle game, set in a world with a truly unique style. A fun story combined with challenging puzzles, that gives you that "aha!" feeling when solving them, makes for a cool game that everyone should try.