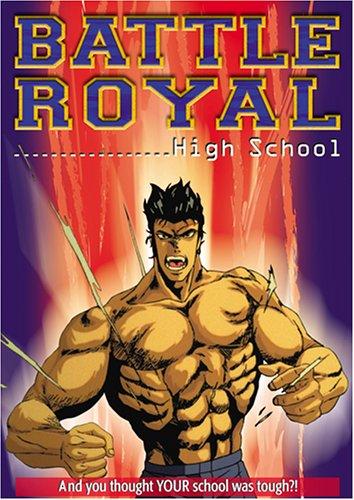 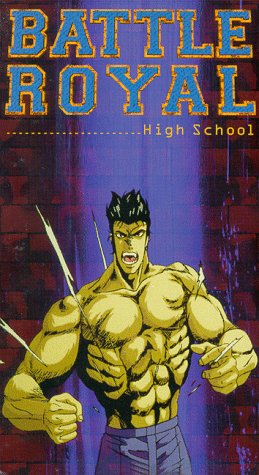 Hyoudo Riki is just an ordinary guy who likes to wear a tiger mask while Kung-Fu fighting, which means he fits in real well at BATTLE ROYAL HIGH SCHOOL.
"Battle Royal High School" is a one-hour OAV (original animated video) from 1987 based on a manga entitled "Legend Of The True Demons" (which appears on screen as part of the title here). It has no connection to the live-action Japanese film, BATTLE ROYALE (2000), or the novel on which it's based, about a class of ninth-graders sent to an island and forced to kill each other. Instead, this one is about high-schoolers embroiled in a dizzying whirl of warfare between different demon factions, a demon-slayer and an interplanetary space cop. Blood and gore fly, monsters attack, teens are possessed, clothes are stripped off, profanity is hurled (on both the English and Japanese soundtracks), fights are furious, and a good time is had by all who enjoy over-the-top high school occult combat, despite the fact that way too much detail is crammed into one hour's time.

Riki Hyoudo is a lone wolf karate student who suddenly finds himself possessed by Master Byoudo, "ruler of the Dark Realm," who's come to Earth to fulfill some kind of ancient prophecy. When Byoudo finds that Kayn, the blue-skinned female "Demon Master of the Fairies," has betrayed him in an attempt to spread evil fairies amongst the humans, he asks Toshimitsu Yuuki, a handsome demon slayer newly arrived on the scene, to ally with him against Kayn. Meanwhile, Zankan, the young Space/Time Continuum Inspector, beams down from an orbiting spaceship to investigate a perceived break in said space/time continuum. All the while, young Ryou, a female classmate of Riki's and a fellow karate student, gets involved as well. In the course of it all, Riki still has to attend classes and student council meetings. The big battle comes when Ryou is trying to find Riki to drag to a meeting. As Riki/Byoudo, assisted by armor-suited Zankan, takes on the Kayn-possessed Yuuki and assorted grotesque creatures, they completely tear the school apart, in a scene sure to excite high-schoolers everywhere (although no one at this school actually seems to notice).

As a product of the late 1980s, "Battle Royal" boasts the distinct design touches of the Japanese anime of that era, particularly the bold lines and bright colors of hand-drawn cell animation. The character designs (by Nobuteru Yuki) are nice and sleek, with good-looking faces and the big expressive eyes with minutely detailed pupils that were a characteristic feature of the era. The imaginative demonic trappings resemble some of the other occult-themed anime of the time, including "The Dark Myth" and the early "Peacock King" volumes (one of which, "Castle of Illusion," was directed by this film's director, Ichiro Itano, and is also reviewed on this site).

The big problem with this one, of course, is that it's so short. After a lengthy (and exciting) build-up to a big confrontation, it then cuts short the climactic battle. This could easily have been expanded to feature-length or extended to another whole episode. Why they felt they had to condense a long-running manga into a single hour is something only the producers can tell us, although this was not an uncommon practice of the era.