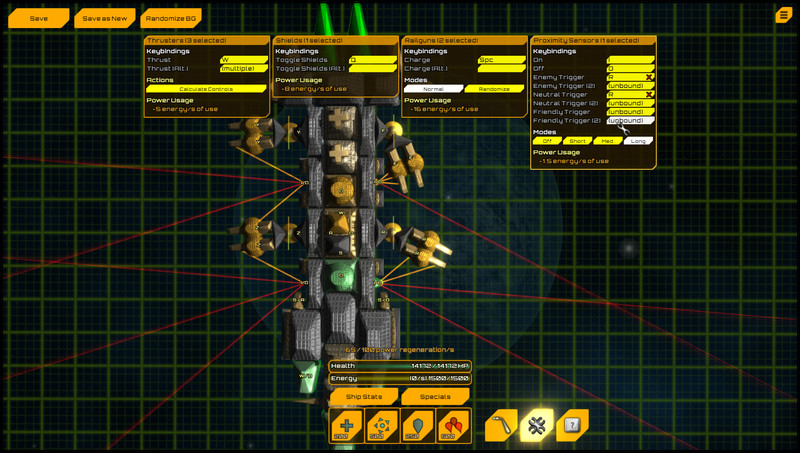 Advanced Mechanized Spacecraft is physics based action rogue-like/RPG with 3D graphics. In this game you build your own ship, explore huge procedural maps, and battle computer controlled enemy ships entirely made out of components that you can salvage and put on your ship.

At this time the 1st of 3 planned episodes, "The Golden Pyramid Portals" is released.

As well as the primary missions (bosses), there are now secondary missions which can help you level up faster and get higher level and harder to get components as rewards. There are missions available from every space station, and roughly 25 space stations (one in each area) in each game. Missions get replenished as you go through them, and are randomly generated and scaled based on the difficulty of the area you are in. You can either take a set amount of gold for completing a mission, or gamble for a better prize. 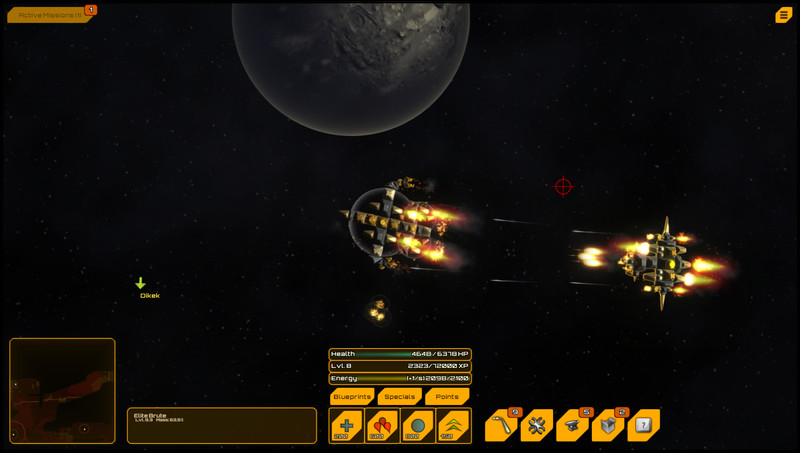 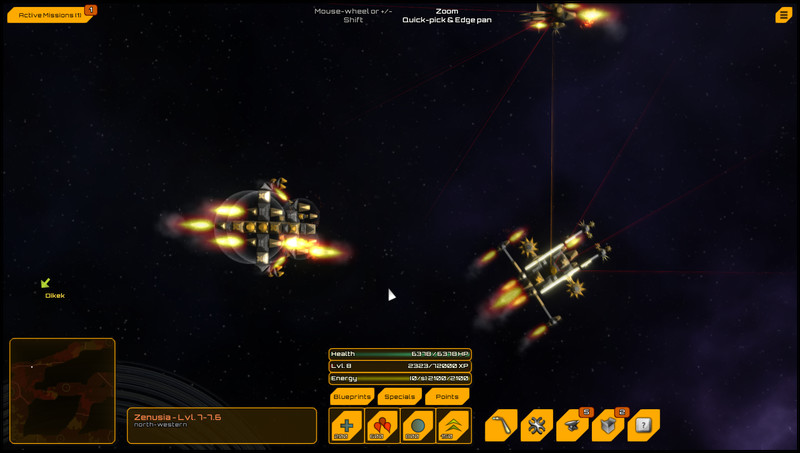 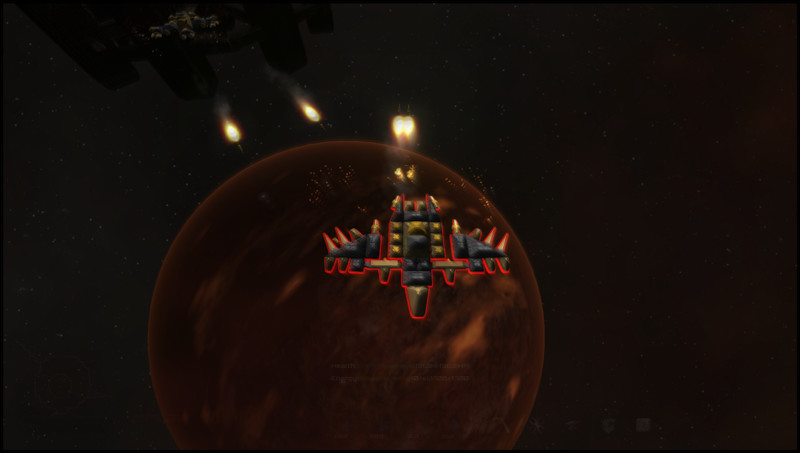 It has many mechanism blocks that make game unique. You can assign the keys for each mechanism blocks, weapon and thruster. You probably like this one if you like Reassembly, Terra Tech, Captain Forever, Spaz, Starship Constructer. Playable and challenging, no bug found yet..

But little shallow??!. Thumbs up because of the added(on request) Linux build.


As well within the next week or two I will be releasing a free Demo version on Steam, so stay tuned for that if you haven't purchased the game but would like to try it out first.. MAJOR UPDATE: Secondary Missions/Space Stations, Graphical Improvements, AI Improvements, Optimizations, more:
Glad to finally get this update done and released!

Many thanks to Jolenar for helping me improve the graphics in general, and for doing some game art as well. Also shout out to GentleCrimson and everyone else who helped test this update while it was in development!

Secondary Missions/Space Stations. Weapon modes, more enemy ships, crafting materials, blueprint unlocks, more.:
First of all, thanks to everyone who's been playing and reporting bugs and giving feedback, it helps!

Here's what's new in today's update:. UI Scalabilty, Sandbox Test Mode Update, and info on what's next:
BlockShip Wars: Roguelike has been in Early Access for nearly a year now, and I think the game has enough core features to go ahead and starting working on the rest of the content.

One episode is complete, two more remain. These are roughly planned out, and most of the work involved is creating new ship components, special abilities and AI ships to fill out these episodes. All of the new components & specials for the second episode are planned out (however there may be additions, removals, and changes), and the plan is to have this 2nd episode in the game by the end of January, and the final episode within a few months of that.

In order to get started on this the first task was to redesign parts of the UI to allow for much larger number of ship components and special abilities, which is the majority of this update, as a result many parts of the UI have been redesigned to scroll, and to allow for better finding of things with a large number of items.

Here are some screenshots of some of the changed UI:

The new component palette in the Ship building mode: 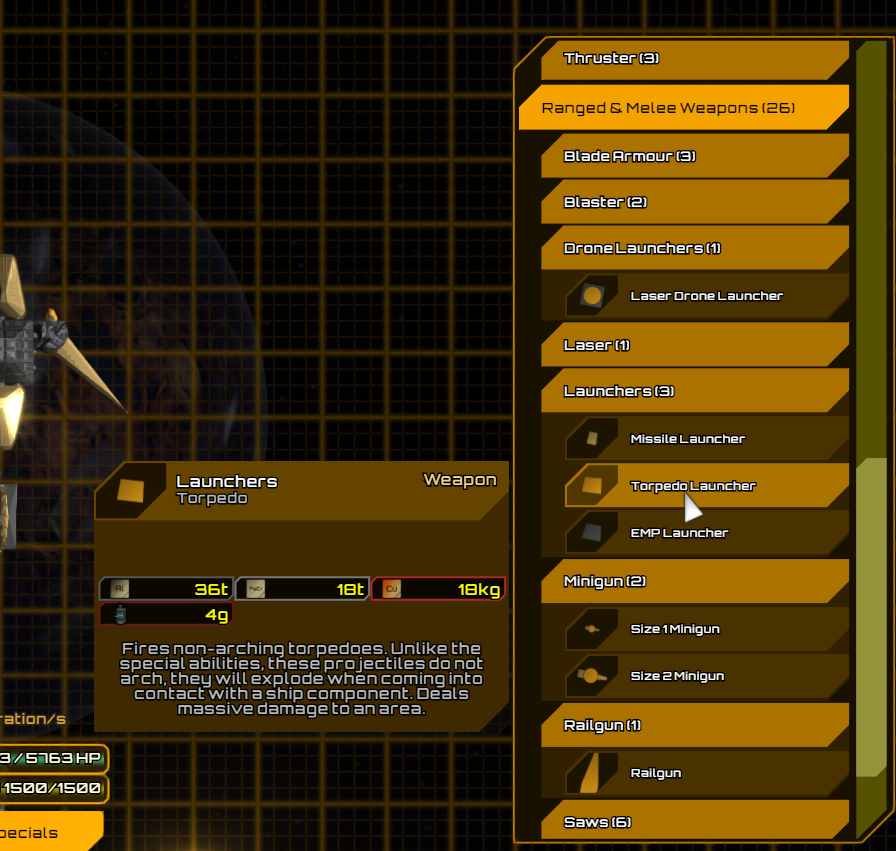 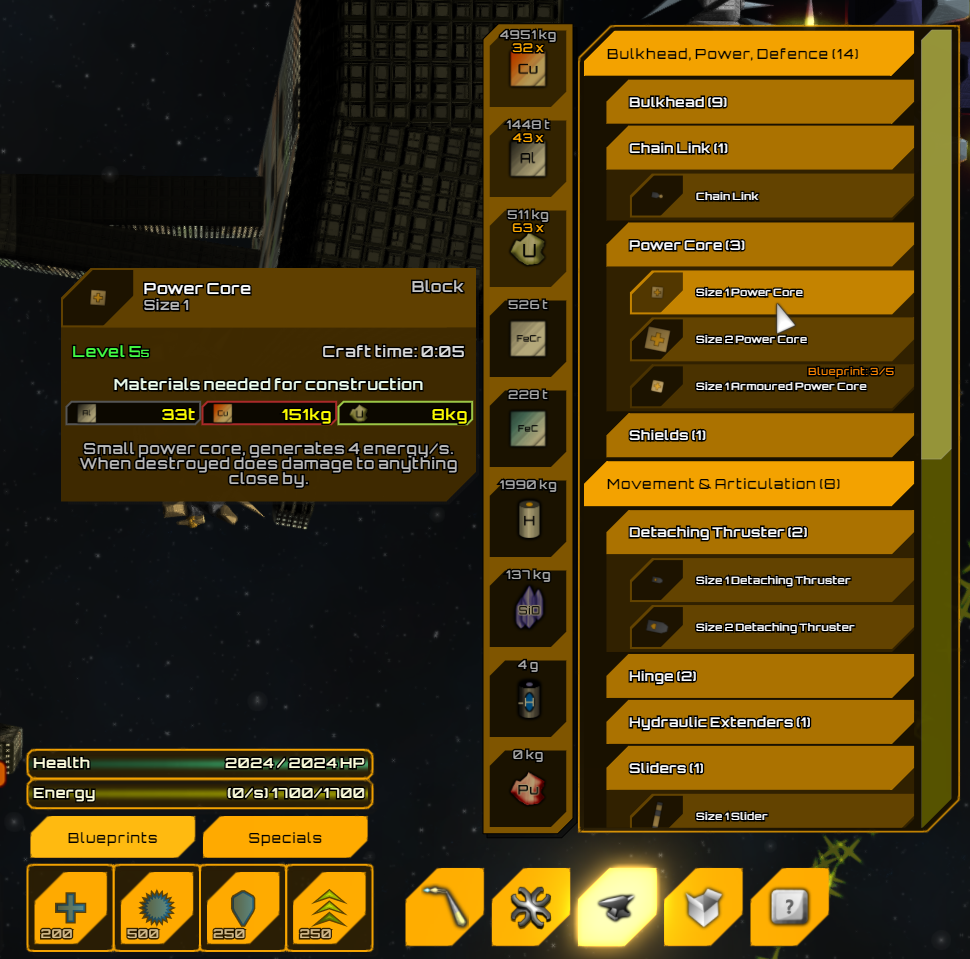 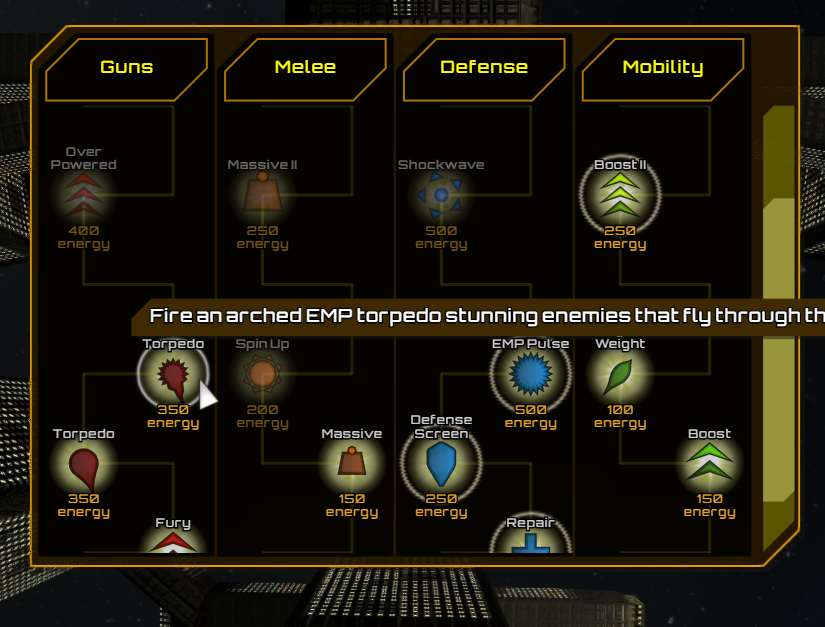 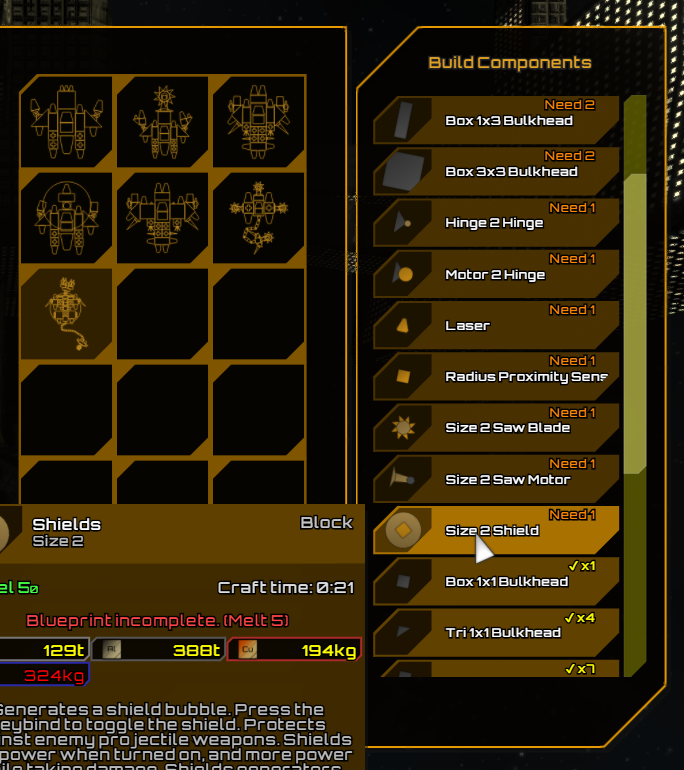 Also in this update a test mode has been added to the free ship building mode, click a button to enter test mode, your current workspace is saved to memory, and you can spawn AI controlled enemy ships (currently 8 to choose from in the mode, and up to 3 at a time) to fight against. Clicking 'Stop Test' will exit out of test mode, despawn any enemy ships and scrap laying around, and return your ship to the state it was before starting the test. 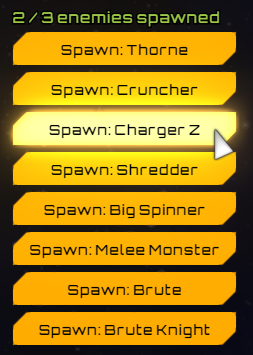 My focus will be completing the content for the next several months, but I will still be releasing updates with bug fixes, smaller features, optimizations, etc. and still would love to hear your feedback.

Also looking forward to seeing and testing out some of your own ship designs in the Steam Workshop!. MAJOR UPDATE: UI Overhaul, Background setting overhaul/optimization, New music, Dangerous & Elite enemies, more!:
This update has been in the works for a while, and I'm excited to finally publish it!

List of Updates. Improved explosion graphics, better material pickup graphics:
This update was pushed up last night, the changes are:

Juicier explosion & destruction graphics. Graphics, Gameplay, Optimization Update - Late September '18:
First of all, big thanks to Megan for providing me with great feedback and ideas, many of which that went into this update.

I've added a new trailer to the store page, which is also on YouTube here: https://www.youtube.com/watch?v=V-x4_AzxhK0

Also if you have ideas or feedback, or would simply like to chat about the game, feel free to join the BlockShip Wars: Roguelike Discord Server: https://discord.gg/tGpE6Dn. Ship configuration system overhaul, automatic thruster keybinding button, more.:
All ship configuration items, as well as ship controls display & power usage have been moved into the new "Config Mode". 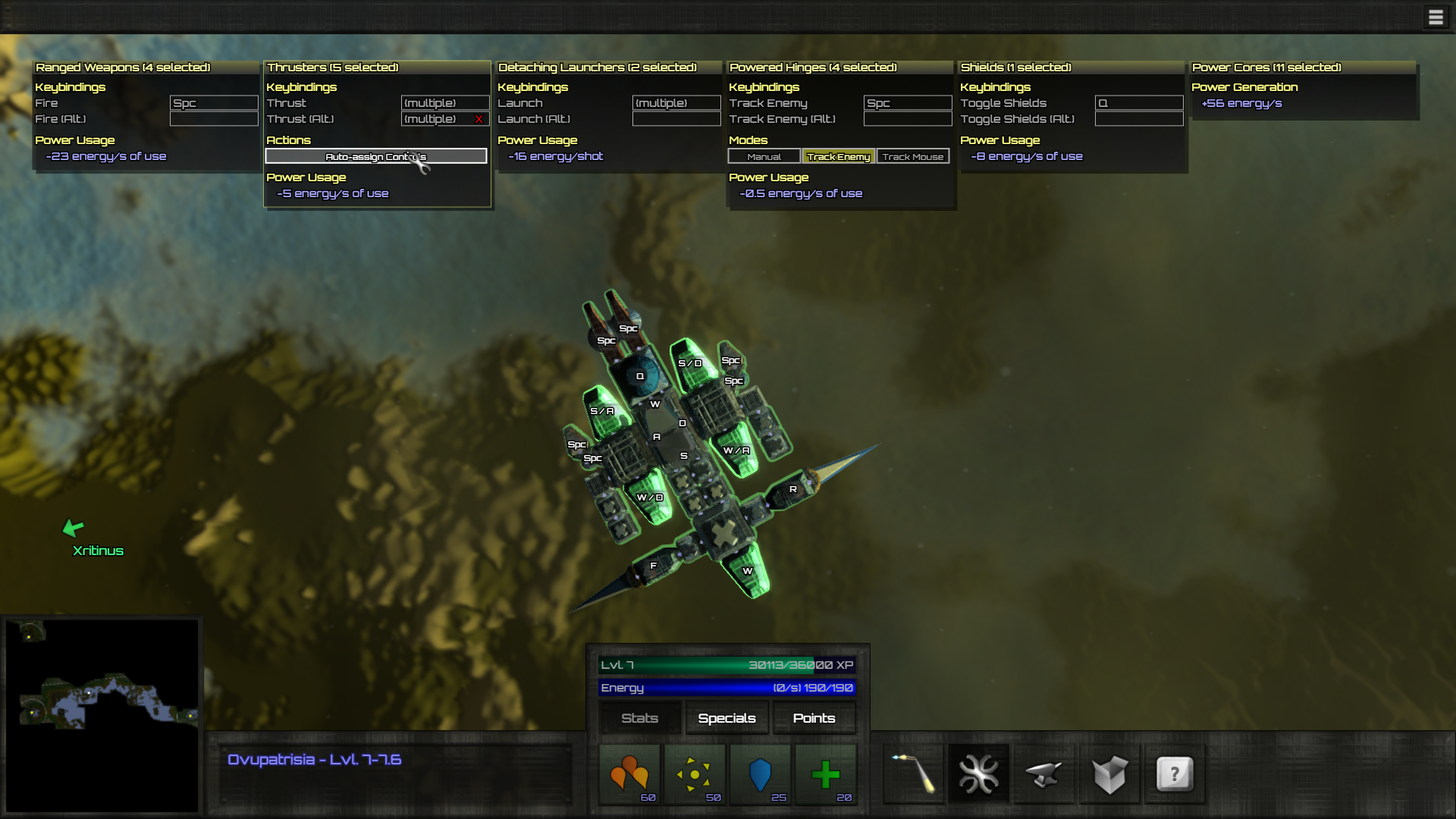 Now you can have AI decide which controls to bind to what thrusters by entering config mode, selecting all the thrusters on your ship, and clicking "Auto-assign Controls". As well modes (i.e. auto tracking & mouse tracking modes to turn powered hinges into turrets) have been moved into the config mode. The original keybinding mode is still available, however it is now only for rebinding shortcut keys for buttons on the HUD. Multiple components in a category can now have keys and modes set at the same time as well.

The other major change made is starting each game off with a default ship already built. Good enough to get you passed some of the easier enemies, and with a little work some of the harder ones with more powerful weapons to salvage. This will be especially useful for people playing Rogue mode, as you won't have to build a new ship each time you die and are forced to start over.