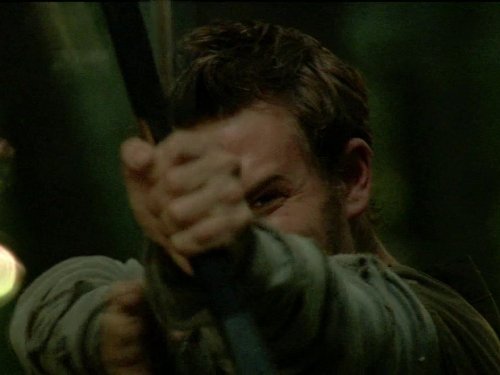 Robin cannot come to terms with losing Marian. He refuses to help Edward in confronting the King and abandons Much and the gang: his world has fallen apart. There is no point in being Robin Hood anymore. But all is not what it seems and the discovery of a terrible secret will spur Robin back into action and see the Sheriff and Gisborne defeated before the day is out.
Robin Hood has been far from critically-acclaimed and hardly anybody has taken it seriously. As the first series draws to a close, everything is resolved. Well, not exactly everything. This final episode was good, I'll give it that, but it lacked action! The action scenes in the first ten minutes of the episodes were like Kingdom of Heaven, in the sense that they were good and the best this series will probably offer, but there was little more on offer after that, and the conclusion was really just silly. Once again, the Sheriff's crap guards are ready to stand around and watch their master get defeated whilst Robin Hood's men pull blankets over their heads and try to kill them. Though it became fast paced towards the end and at least interesting, Much's interruption of Marian and Gisborne's wedding (sorry for the spoiler) was really just pathetic and laughable. Was he trying to do some kind of barmy dance routine? Much is really just an idiot. I'm sure everybody knew that Marian wasn't dead, but they could have at least brought her back with some hatred for Gisborne - however, she just talked to him as normal. I'm telling you, I wouldn't do that to the person who tried to kill me (if that ever happens). The series is brought to a close on a nicely-monumental final image and a very fun ending, but a better conclusion could have been reached and many things have been left not resolved. Can the second series correct these faults? Well, we'll have to wait till 2007 to find out. 7/10