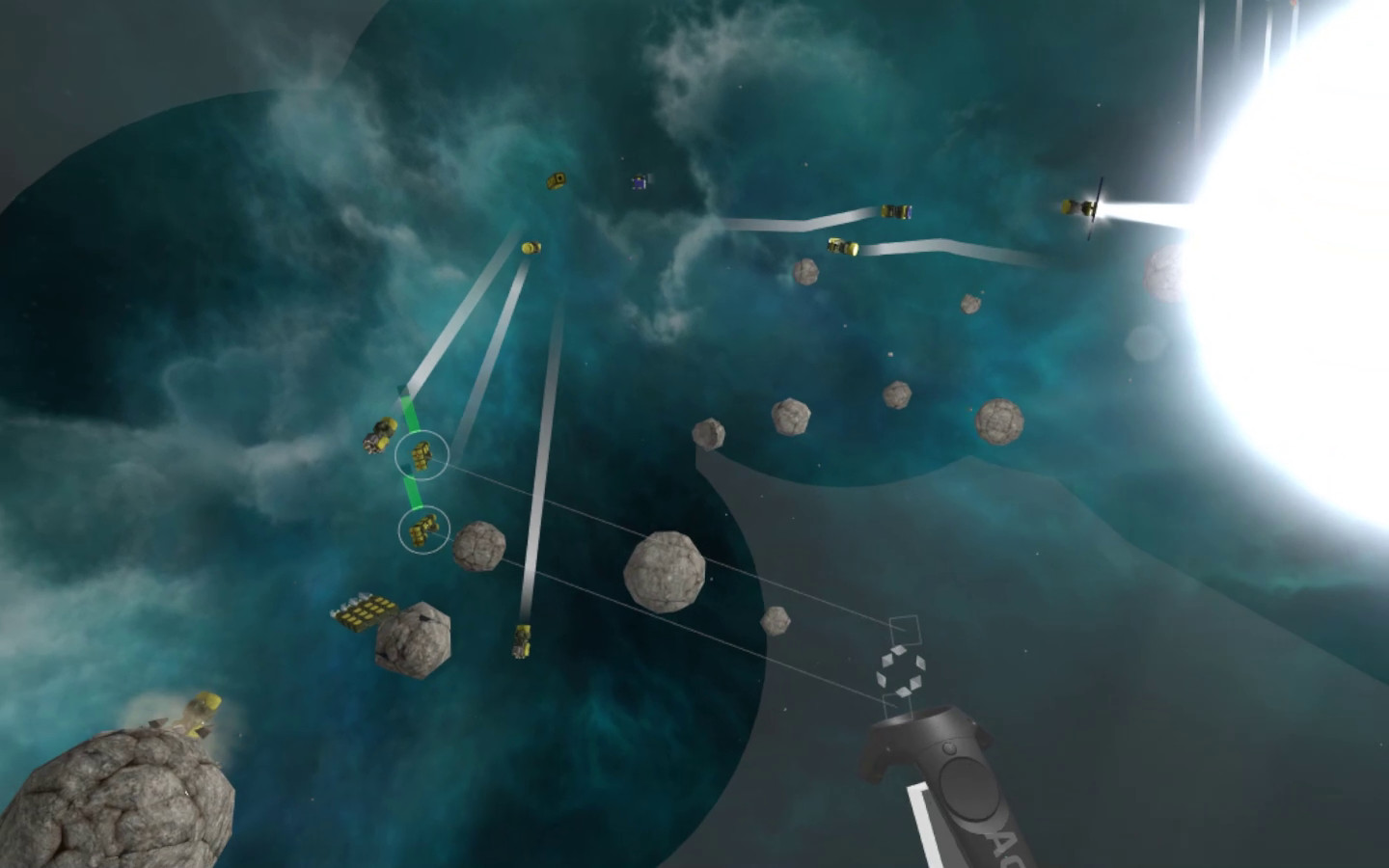 With its simple user interface and mechanics this game allows for instant casual play, where complex strategy arises from your ingenuity, rather than from extensive rulesets or tech-trees.

void LINK is one of the first products to build on the unique advantages of modern VR peripherals (HTC Vive, Oculus Rift) to make RTS interaction with "spatial maps", truly 3-dimensional battlegrounds, headache-free by letting you implement your strategies in 3D space simply by moving your hands through it.

For some optional depth, void LINK comes with a voxel-style editor for creating custom ships from basic building blocks (Laser, Propulsion, Sensors, ...). You can design and introduce new unit types, even during battle, to counteract specific threats, ... or just for the fun of it.


"Enlisted by an intergalactic mining consortium as one of their 'Field Coordiators', the player runs resource extraction operations in far-out regions of space. Depending on their remote control interface, 'void LINK', Coordinators find themselves pitted against each other and engaged in series of battle encounters, where winners climb the 'universal' leader board." 7ad7b8b382 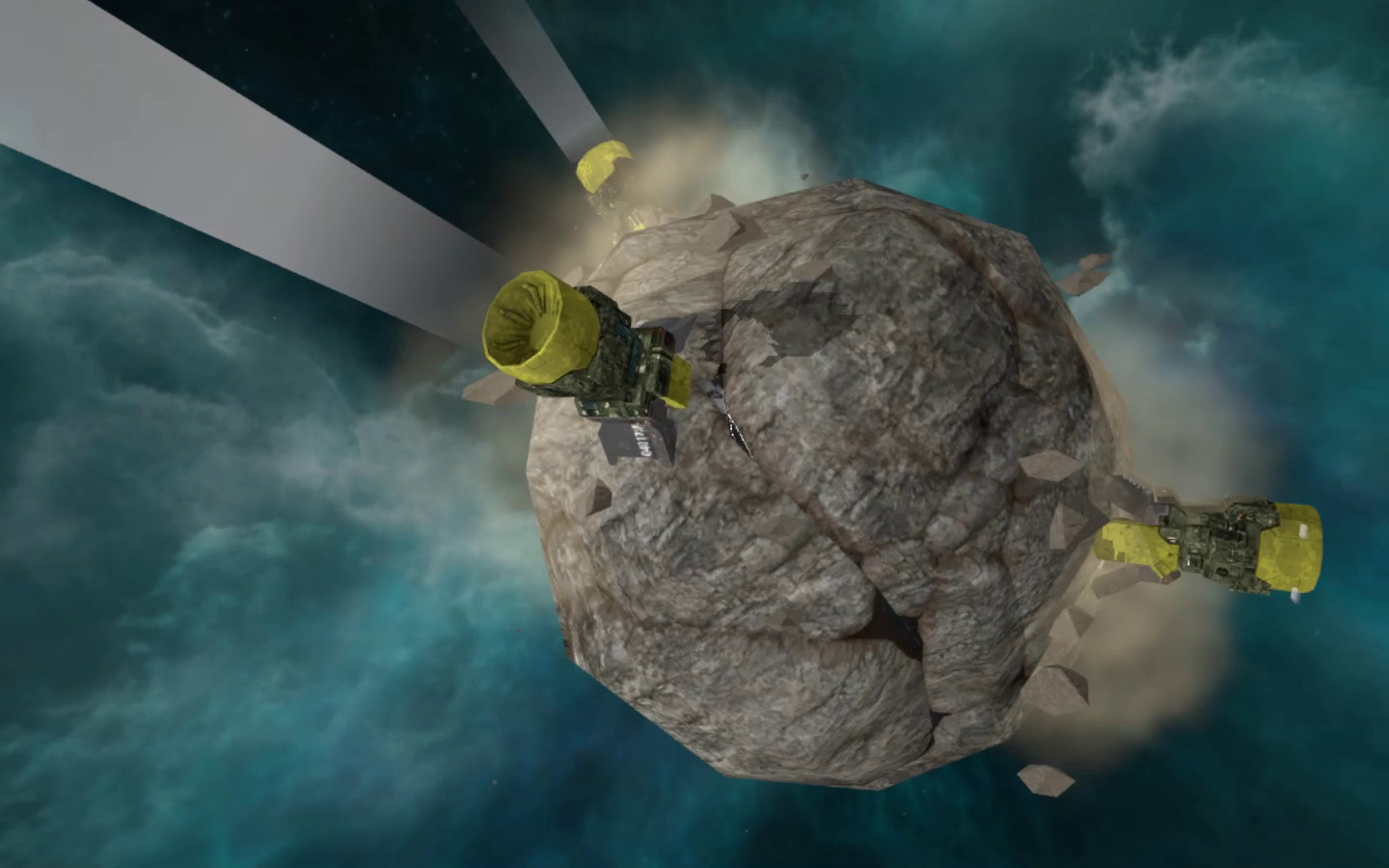 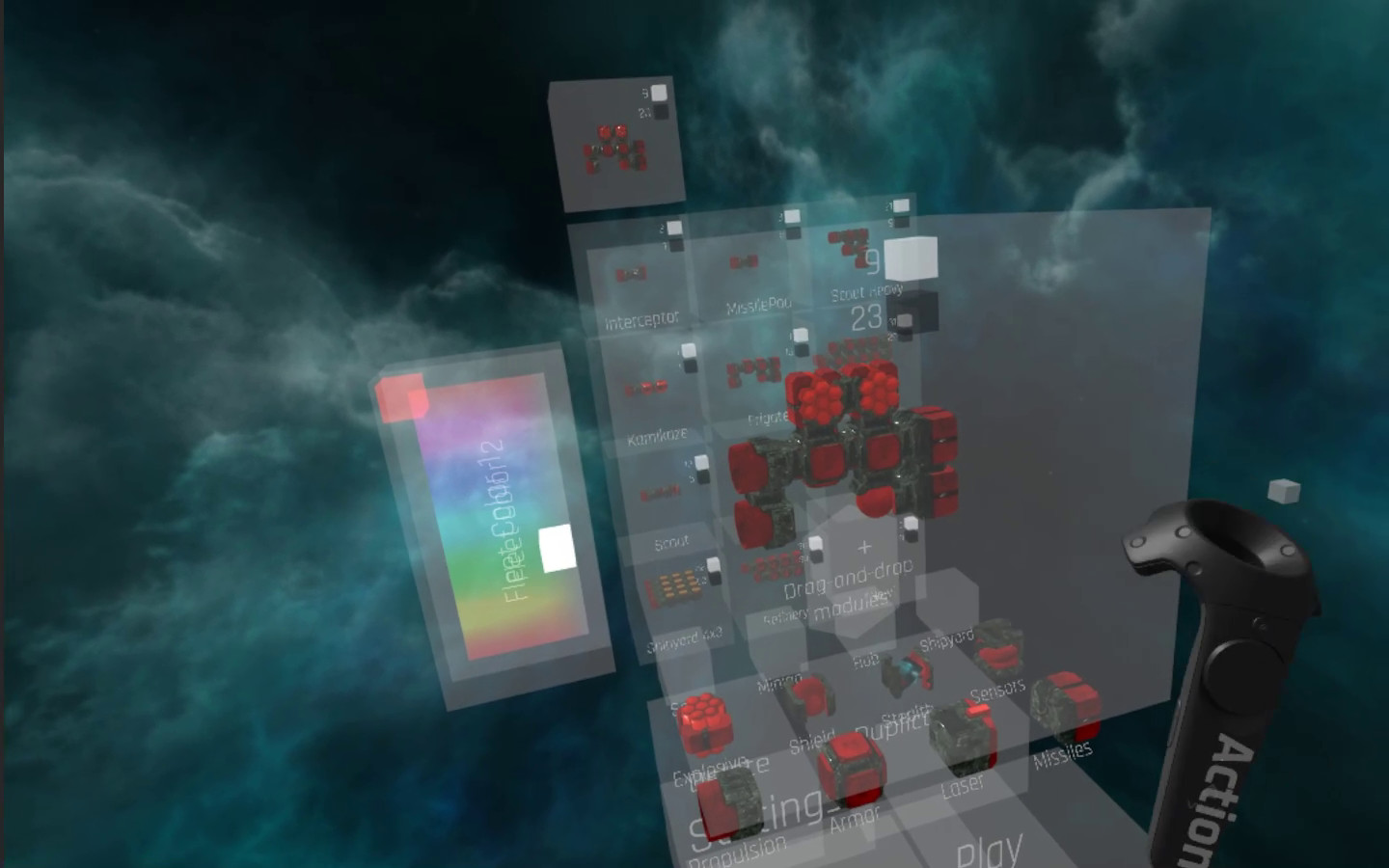 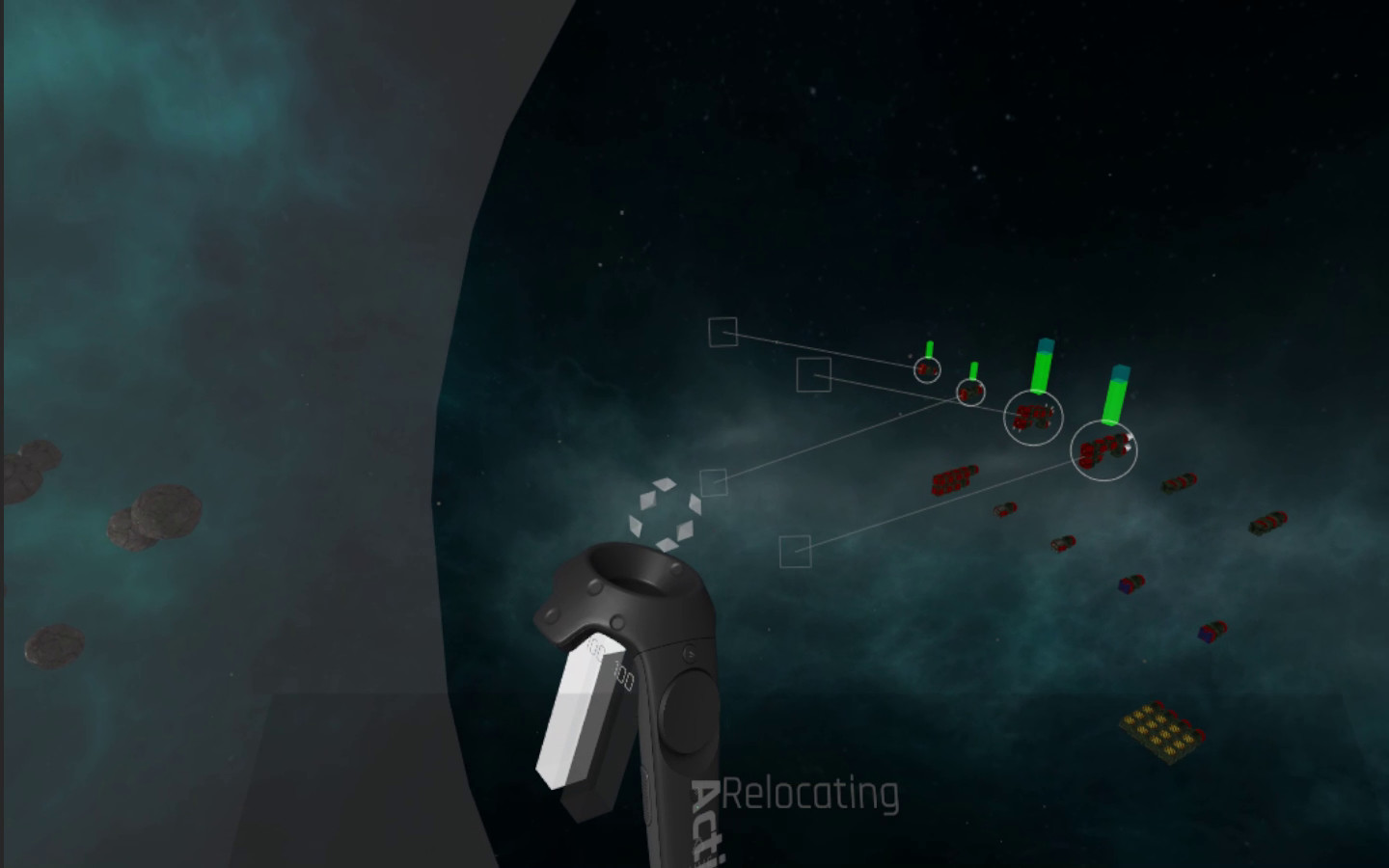 Total freedom to build own ships \/ fleet. Like it!

Has all the buidling blocks of the standard RTS, reminhas a homeworld feel to it.
Look forward to final product.


. I like the unique approach that with void LINK you enter the VR-world not as an avatar representing yourself, but rather using the VR-space as a tool\/method for monitoring and operating a fleet of starships in a Homeworld like fashion.
So in void LINK space surrounds you and you can "float" or teleport through it. You are controlling your ships in this fashion and by that controlling space itself (if you do a better job than your opponent). It's easy to get familiar with the controls and soon feels natural.

One of the best RTS for VR out there.. Very nice game , easy gameplay construct , smooth and interactive , big thumbs up !!!

Total freedom to build own ships \/ fleet. This is just excellent ! The VR setup is well done and the UI is just fitting the RTS genre. It is not as simplistic as you could think when you start the game. There is a lot of challenge in the game and the multiplayer is just very good. I do not know why my play time is low as I have been playing a few hours :) Definitely recommend this game if you are into old shool RTS with ressource management, fleet management and ship customization

first thing i want to say is that the quality of work thats gone into this game is clearly top notch. space is obviously pretty empty but the graphics on what is there are great. zooming in really shows off the level of detail and effort thats been put in. unfortunately the single player side is very limited at the moment (i expect that to change in time) and RTS games have always been some thing of a nich market. when you couple that with the fact VR still has a some what limited player base you can imagine it's pretty hard to find a match online.

im hopeful that we might get an improved lobby system with player lists and maybe some way to occupy yourself while you wait for people to come online. as it stands right now though there isn't really much of a game here. dont get me wrong there are all the right parts for this to be fantastic. think homeworld crossed with lego in space. it's just without anyone to play with there's not a lot to do. the price feels fair though so if you have a friend to play with i fully suggest you get it.

update: the dev has posted a suggested time slot for players looking for a match to come online and i've managed to get several games already. so if you are interested in void link or RTS games in general i would say grab it. the game itself runs great and the mechanics seem spot on.. Hello
i am normaly not that kind of a Person that writes Revies or anything like that but
now i stumbled over a game that is way way way to cool to dont leave a comment

soo i played so far only 1 hour and the game already blowed my mind.

it runs smothly, but so far i didnt had much units flying around
the controlls are from the first moment on very intuitive way,
only an explanation was missing that i have to deselect everything to use the shipyard
to zoom in and out is wonderfull just wonderfull, also the fog of war is an intressting approach in vr

to the rts it self,
its nothing special, you can build units, need to harvest, expand and battle
the refreshing twist is, that you can designe the units your self, that allows way more personalized strategys, but wasnt so far able to test it deeply

the ai in practice mode feeled dump and aggressiv but since this is an multiplayer game, it is enough for practice

all in all it is from my point of few one of the best VR games out now, as specialy in this price segment
realy just try it out and fall in love ^^. WOH...Hey Devs PLEASE do not stop working on this!..you have something here... as a HUGE Homeorld fan you NAILED it!... in some ways with the build your own ship idea you surpased relics basic concept...infact managing ships in my living room sooo surpased the clunky drag a disc sytem homeworld had to use due to its critically limited 2d interface.. my only complaint is minor becuase i know this is brand new in development and that is the game didnt end after eratcicating the computer A.I. SOOO that being said can you please add more skirmish options for more a.i. teams and the option for me and my frinds to co-op against them?!! that would be solid!.

I would never had found this gem if not for googling to see if homeworld was ever going to release a VR version and i saw your plug for your game in the comments of a reddit thread.. i am so glad you did that or i would never have found this. as soon as you make this more "multiplayer vs A.I." friendly ill be able to strong arm my VR buddies into picking it up.

i fore see a day down the road where this is flushed out with all the little options added for setting up a match and maybe even a cockpit view mode to get even more first hand view of some huge space battles. maybe flag ship you can pilot for fun.

ooo also last thaught, if you could add an option to turn on or off the greyish fog of war effect and just have the ships fade in as they get close that would be nice, ide prefer a clean space look from all my views but the ability to toggle the fog of war on when looking for areas i havent explored for enemys in the endgame parts would be a nice option.

Cheers and hi-fives!. I like the unique approach that with void LINK you enter the VR-world not as an avatar representing yourself, but rather using the VR-space as a tool\/method for monitoring and operating a fleet of starships in a Homeworld like fashion.
So in void LINK space surrounds you and you can "float" or teleport through it. You are controlling your ships in this fashion and by that controlling space itself (if you do a better job than your opponent). It's easy to get familiar with the controls and soon feels natural.

One of the best RTS for VR out there.