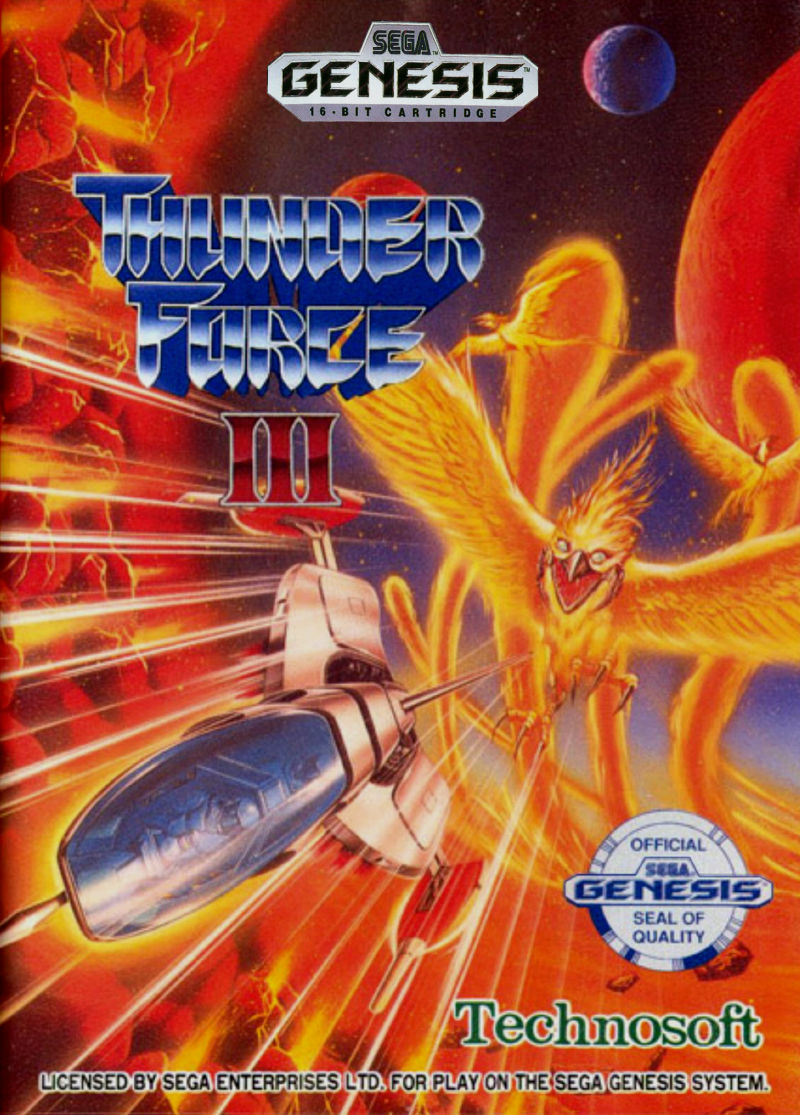 The famous shoot'em up series Thunder Force reaches its third installment. 8 new levels of non-stop action packed with gargantuan bosses.
The Galaxy Federation is slowly losing its edge over the ORN Empire. The ORN Empire has now installed cloaking devices in five major planets in order to conceal their headquarters, making it difficult for the Galaxy Federation to find and locate the ORN base. The ORN Empire has also created a battleship known as Cerberus to defend the ORN Empire's main base. In order to retaliate, the Galaxy Federation send in FIRE LEO-03 Styx to destroy the five cloaking devices, then infiltrate the headquarters to destroy the leader of the ORN Empire, "Cha Os", the ORN emperor.
This game is part of a series of games for the Sega systems. The previous game was a overhead space shooter while this one is a right to left side scrolling one as this was a trend at the time for games of this sort. This particular one also shows the powers of the Genesis very well; basically, when utilized correctly, the Genesis excelled. They used a term back in the day called, 'blast processor', which was completely made up, but emphasized the one category that it did better than the SNES and that was speed. That is apparent here, as this game moves very fast with multiple enemies on the screen. Sure, speed, may have been the only thing it technically had the advantage in, but this one also boasts a great soundtrack. I have been playing a lot of space shooters the past few days, most on the SNES. This was the only one I revisited on the Genesis and it wins the music, hands down!

The story is pretty standard for a space shooter. Nearly every one I have played the last few days has the exact same story. Evil empire declares war, a spaceship is sent out by the good guys to blow through the bad guy's forces and take down the final enemy! The game play does a couple of things differently than other space shooters to sort of put its own seal of uniqueness on the genre. First, you get to select the stage you start at. You have five stages to initially select from, once you do select a stage you face each stage in a clockwise motion. The other feature that is a bit unique is that once you collect all the super weapons, you can switch between them rather than have to have one or the other. It is very helpful when you need a whole lot of guided lasers, concentrated lasers, concentrated fire from your rear and so on.

The game is very fun, though it is a bit on the short side. Of course, most space shooters are on the short side for the most part. The longest one I have played is Gradius III, it seemed to last quite a bit, but most are over after a few stages that usually consist of lots of enemies, power ups and a stage boss. The graphics here are good, the levels designed well, nice music and very fast game play. What else would you expect from the system that coined the term, 'blast processor'?