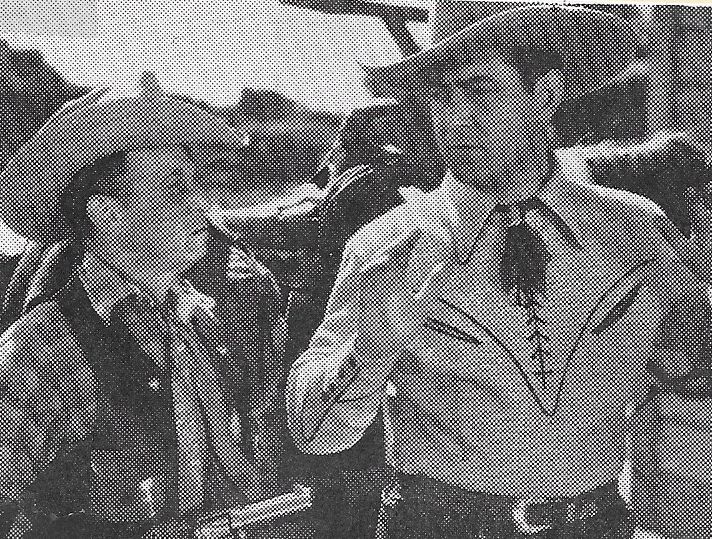 Nevada Jack McKenzie (Johnny Mack Brown) rides into the town of Blackwell, to discover that Sheriff Ben (Roy Barcroft) and town banker Ward (Sam Flint) head up a gang of thieves. U.S. Marshal Sandy Hopkins (Raymond Hatton) arrives in time to see his old pal, Marshal Bill Barstow (Robert Frazer), killed, and his son Tom Barstow (Kirby Grant) held for a robbery and murder done by the gang. Nevada frees Tom and hides him out in the cafe run by Clem Martin (Steve Clark), father of Tom's sweetheart, Ruth (Christine McIntyre). Sandy is working undercover as a saloon swamper, and learns many plans of the gang.
Brown fights a swindler and his pal, Hatton, finds a way to help a robbery victim buy back his property.
The personable Johnny Mack Brown is about the only thing that lifts this just above your average oater. His easy going Southern charm and likability keep this going to to the end and make it watchable. Very standard storyline, the sheriff is in co-hoots with the local banker (you just know a banker would be a baddie, don't you?) and it's up to Johnny and fellow undercover Marshall, Raymond Hatton to bring them to justice and free an innocent man accused of murder, in a final shootout at the saloon.

Female interest is in the form of Christine McIntyre, who has little to do except look either pretty or worried. It's all very basic and pretty forgettable but it passes an hour easily enough. But really, one for fans of the western genre only.