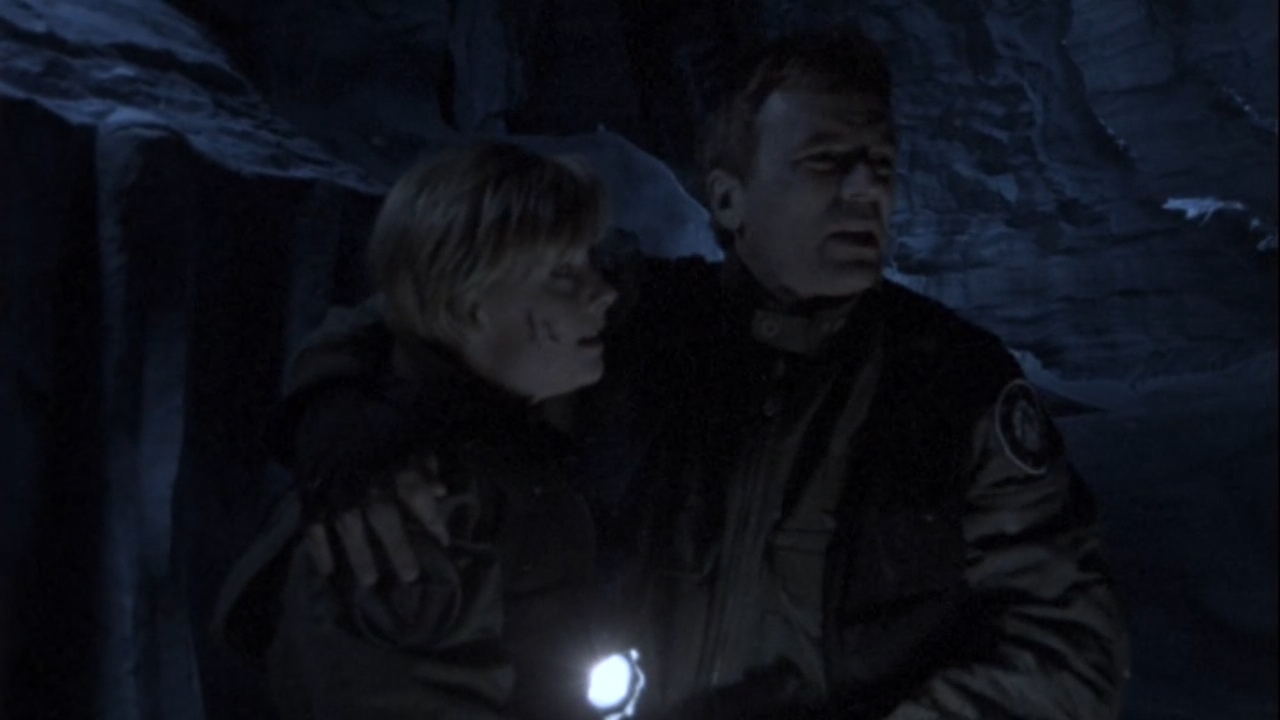 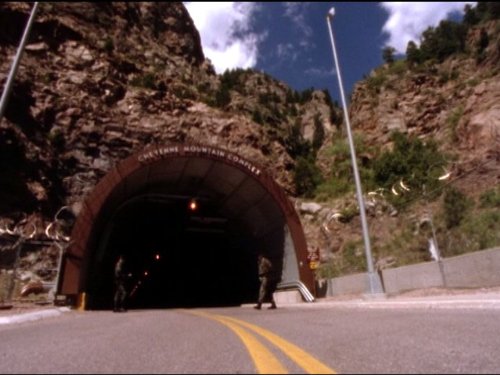 Teal'c and Daniel Jackson suddenly return to the command center not long after the SG-1 departed but an apparent gate malfunction sends Sam Carter and Jack O'Neill to a desolated cave, where it is freezing cold. Jack is also hurt with a broken leg and likely a cracked rib. They have no idea where they are but then neither does General Hammond at Stargate Command. Sam has some difficulty finding the dial home device until she manages to locate it in a frozen block of ice. Even after digging it out however, she can't seem to dial Earth. At Stargate Command, Daniel has begun the tedious task of checking every possible destination in a workable radius, but without much success. When he experiences a slight tremor in the command center, he realizes the error he's made and the location of the gate.
Following a Stargate technical defect, O'Neill and Carter are stranded next to a Stargate in a cave on an icy wasteland. O'Neill is severely wounded and both are freezing. Will the SGC find and rescue them in time?
This was the episode that brought be back from the brink of giving up on Stargate after a terribly written season 1. Maybe the writers were trying to find their groove, they sure found it here.

The episode begins with Teal'c and Daniel being flung back to Earth through the Stargate. Believing Carter and O'Neill were right behind them, we would later figure out they were redirected to another Stargate after the wormhole was overloaded.

Intense recovery missions ensue but turn up empty. Folks, this is where brilliant storytelling begins. Carter blows me away with the best acting I've seen so far. It's pretty obvious she's the De Niro of the cast.

The dialogue between Carter and O'Neill in the cave was amazingly written. Carter alternating her focus between fixing the DHD to get them home and tending to O'Niells injuries just added another layer of intrigue. Carters frustration with the inability to get the Stargate working and O'Neill seemingly on the verge of death brought out character I didn't think she had. (it would later be revealed why the DHD didn't wanna work despite being repaired and in perfect working condition)

After a few clues (that I embarrassingly didn't pick up on) Daniel realizes Carter and O'Neill weren't redirected to another world they were actually redirected to a 2nd Stargate on Earth. Holy Twist, Batman! This was brilliant writing here. Layer upon layer. Something I hadn't seen very much of during season 1.

The only gripe I had here was when they figured out they were located in Antartica. With a seemingly dead O'Neill how the team mounted a rescue in time to save him is beyond me. It must take a few days to travel to Antartica from the US. O'Neill bleeding internally... and in a frozen cave he would've been a frozen popsicle by then. TV logic at its finest.

Season 1 has a knack for having hysterical logic. Luckily the storytelling here gives them a pass this one time.

Still an excellent episode. 9/10 Daniel and Teal'c return to SG-1 after a Goa'uld attack; however Jack and Sam do not arrive and the Stargate damages. Out of order, the technical team needs 24 hours to repair the malfunctioning Stargate. Meanwhile Jack and Sam arrive in a cave at an icy planet and they discover that Jack has broken his leg and rib and they are short of provisions. Where might they be?

"Solitudes" is another good episode of "Stargate". Jack and Sam have to fight to survive in a tough environment and in the end, Daniel uses his brains and finds where they are. My vote is seven.