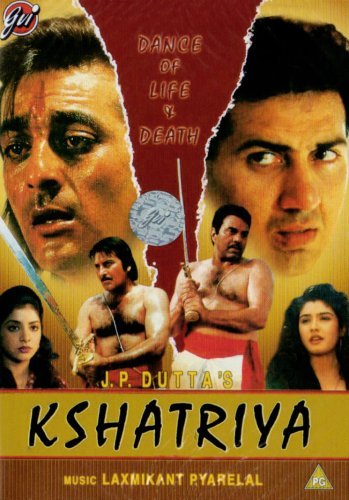 In order to get rain for the arid region in Rajasthan, India, two royal families, from Mirtagarh and Surjangarh, have come together with their warriors, and fought with each other annually, with the winner getting the honor to sacrifice a baby buffalo. When England returned Jaswant Singh comes home with his caucasian wife, he is appalled at the slaughter and warlike conditions. But fate binds him that he is also to continue the family tradition, and as a result his wife leaves him. Years later, children from both these royal families return from England, and are friends with each other. Vinay is friendly with Vikram, and wants to wed Neelima. Will these young people succeed in stopping this bloodshed, and put an end to this rivalry, or will they also be fated to continue this deadly tradition.
In the arid region of Rajasthan, India; there are two royal families, Mirtagarth and Surjangarh who believes in a religious ritual which states that a warrior from each of these two families will come together annually to have a fierce battle with the winner having to sacrifice a baby buffalo and it will rain in that person's territory. This tradition must be fated to carry on by the future generation as it is a rule of nature set down by their kin.
In my humble opinion, this is one of India's greatest films of the 1990s. The wealth on talent on show has never been equalled in any other indian film.

The story is basically about two warring families in Rajisthan, and how various members of each family try to end this feud. The film climaxes with a brilliantly choreographed fight sequence between Sunny Deol and Sanjay Dutt. The scenery and musical score during this fight is magnificent, as it is during most of the duration of the movie. My only gripe is the slightly corny scenes set in the UK.

Considering the epic storyline being told over two generations, and the large number of characters involved, I get the feeling that the version I saw (which runs for about 180 minutes) had been edited significantly to reduce it to a sensible running time. I would love to see the full version as it would help to flesh out some of the characters.

All in all, its another brilliant movie from one of my favourite directors, J P Dutta. Kshatriya is a masterpiece of an Indian film with a heavyweight star cast. Sunny Deol is a actor i wasn't too fond of, but he was good in this film. Sanjay Dutt was superb in this film, he should of been in it for longer. Raveena Tandon looked quite pretty in this film and does a decent job. Divya Bharti looks wasted, but she was nice in this film, rest in piece. Dharmendra is a classic Bollywood actor and plays his role to standards. Vinod Khanna was quite good in this film and gave a good performance. Their are many other supporting actors in this film which include Sunil Dutt. Meenakshi is in this film as well as Kabir Bedi and Rakhee, I don't know if i left anyone out. Best thing about this film is Dharmendra is playing Father to real life son Sunny and Sunil plays father to real life son Sanjay. Its amazing, and is superb.