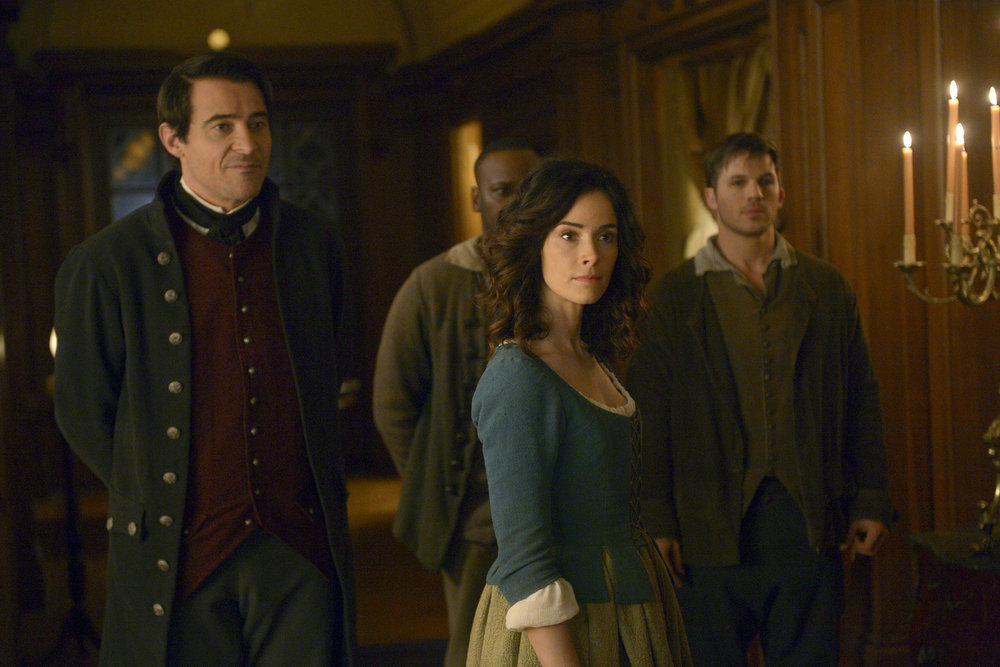 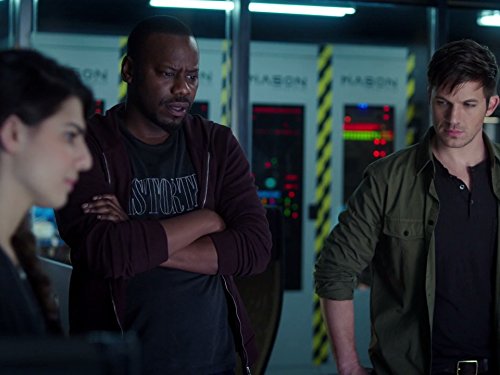 The team questions whether they've been fighting on the wrong side when they encounter Benedict Arnold during the American Revolution.
Finally! Some actions by the year 2016 time-travellers that may actually have a large-scale and DEVASTATING effect on the future. Okay, sure, it wasn't that long a wait, but still, I wanted to see what would happen on a grand scale. Some interesting twists happen in this episode too - some that make us question the actual veracity of history records. Flynn is magnificent and intriguing, truly a wonderful character. His is the most well-written I think, even if he hasn't always been written to be too consistent.
Lucy invited to dinner at home of boss and wife. Looked like Lucy was bring invited for dessert and not just dinner. Wyatt may have competition.

Rufus saves the day again. Jumping way ahead. Rufus having been politically correctly for the time period being made to disappear, then grabbing a rifle in the slave quarters to save the white folks is pretty bighearted. The slave clothes were colorless, drab and horrible. It was dark. Did Rufus give another fake 20-21st century name in this episode? I don't remember. Maybe it could have been ML King or Malcolm X or Kanye.

Flynn is more and more a wuss. He wants to actually be fwiends with the twio. Awwwww. Tears. Let's take down Mr. Rittenhouse. He was the great-great-great grand baddie of Bonnie and Clyde. Was he the cultural hero of Mr. Hitler? Did Rittenhouse cause the Titanic disaster or Hindenburg blowup?

Anyhow, Benedict Arnold looked wayyyyy too old to have a newborn baby, not to mention being husband to such a wenchy young thing.

Flynn ..... spoilers coming ..... says he knocked off Abraham Lincoln. I saw that. First, he knocked Booth's block off, then proceeded to go into the theater box and do the infamous deed. So, D. Rittenhouse, here's one for the Gipper, er, my family, you rotten swine.

In real life, Arnold did not die of gunshot wound or by hanging. He lived to the ripe old age of 60 and I think succumbing to natural causes, after becoming a team player for the British for the rest of his sad career. But don't quote me on that.

Lucy had the cutest costume. Looked like Disney Snow White, with cape. Sort of. The redcoats had bright uniforms of course. Just sayin'. The blue Continentals were a touch more drab.

His Excellency George Washington looked dashing, but I had expected his accent to be more formal, dignified and forebearing than the flat midwestern speech which was spoken.

Is Flynn all comfy cozy now? The former enemies are now friends. Is there still a show? Kill the baddie ... Rittenhouse -- kill the show. Kill Flynn? There would be nothing for Christopher and Mason to do?

John Rittenhouse may appear as adult in a future time period, perhaps. Papa R. was a slime, no doubt.

Papa Rittenhouse was a slime to Lucy. He may have had carnal designs on Lucy, but so may Christopher & co.

We didn't see Anthony or Lucy's father this time.