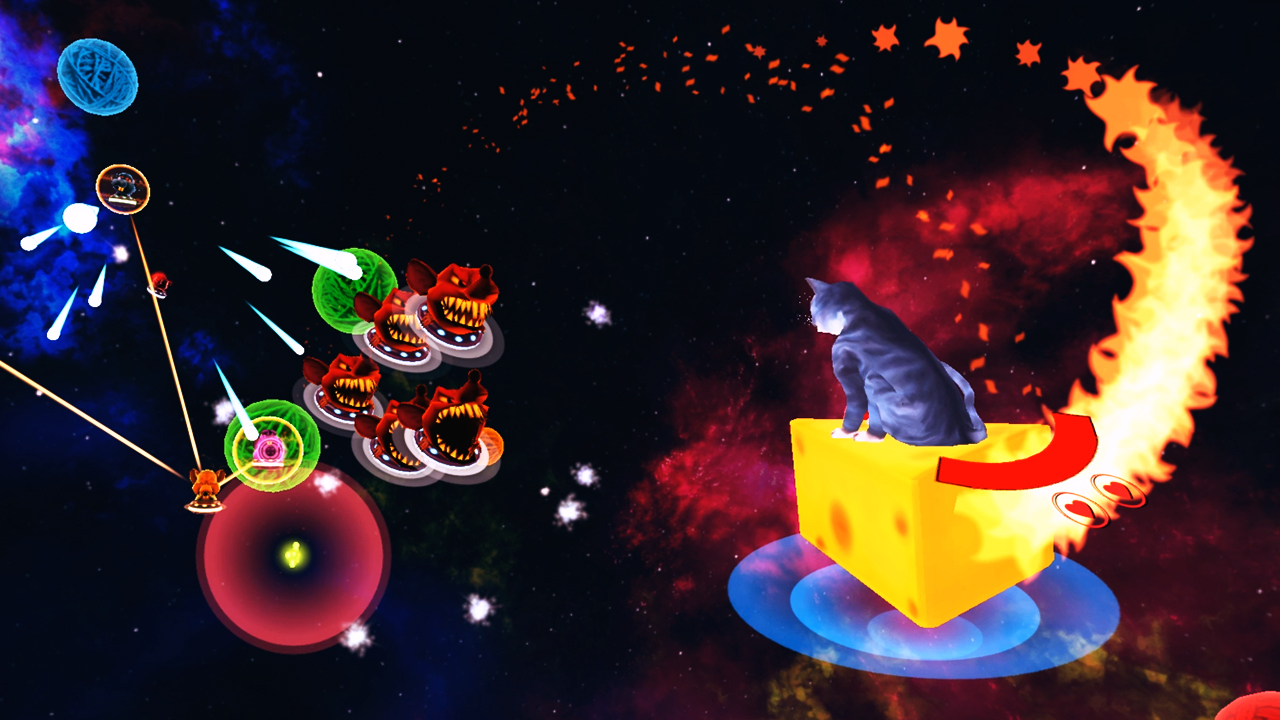 Spacecats with lasers VR is a wave shooter where you can prove to be the su-purr-rior feline in the galaxy by destroying not so claw-ver rat enemies with your mighty lasers!

Customize your spacecat and choose perks to improve it as you get to harder waves. Did you ever want to have a cat dressed as a unicorn on top of a burrito shooting explosive and chain-lightning lasers at evil rodents? Then this just might be your game!

Spacecats with Lasers VR features different difficulties catering to players who are looking for a lighter playtime and to those that enjoy the chaos of bullet hell games. 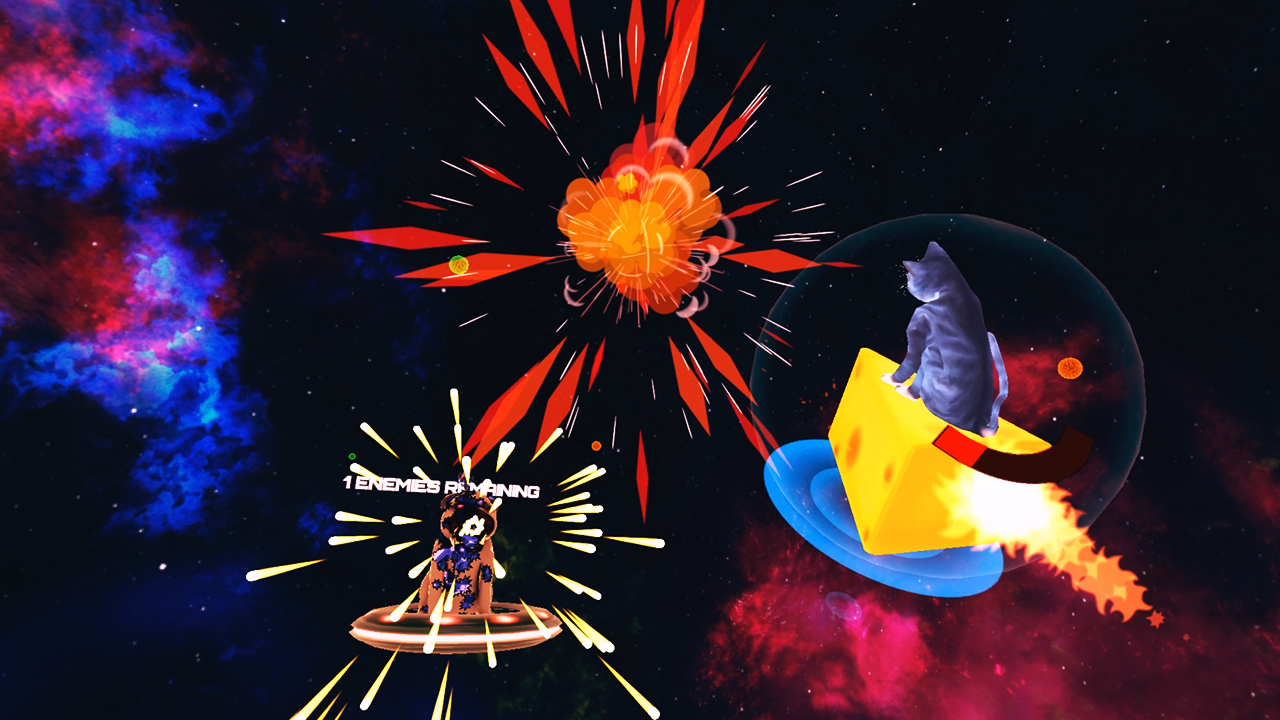 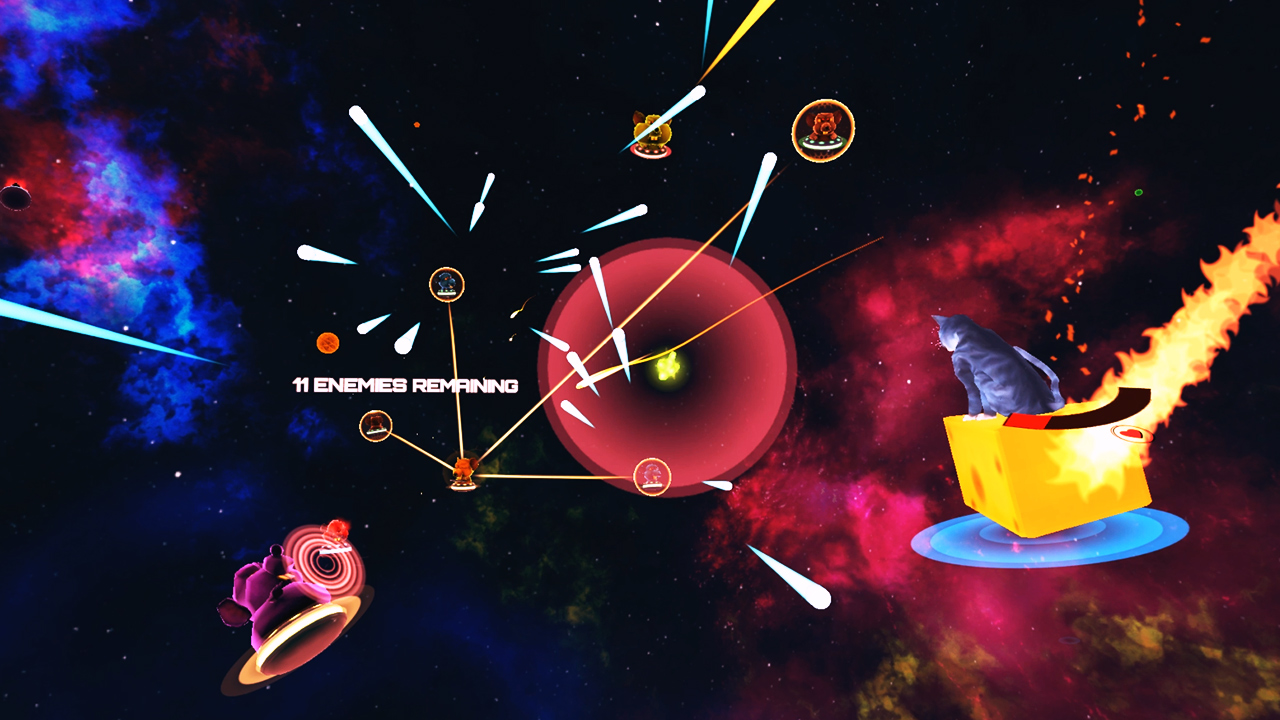 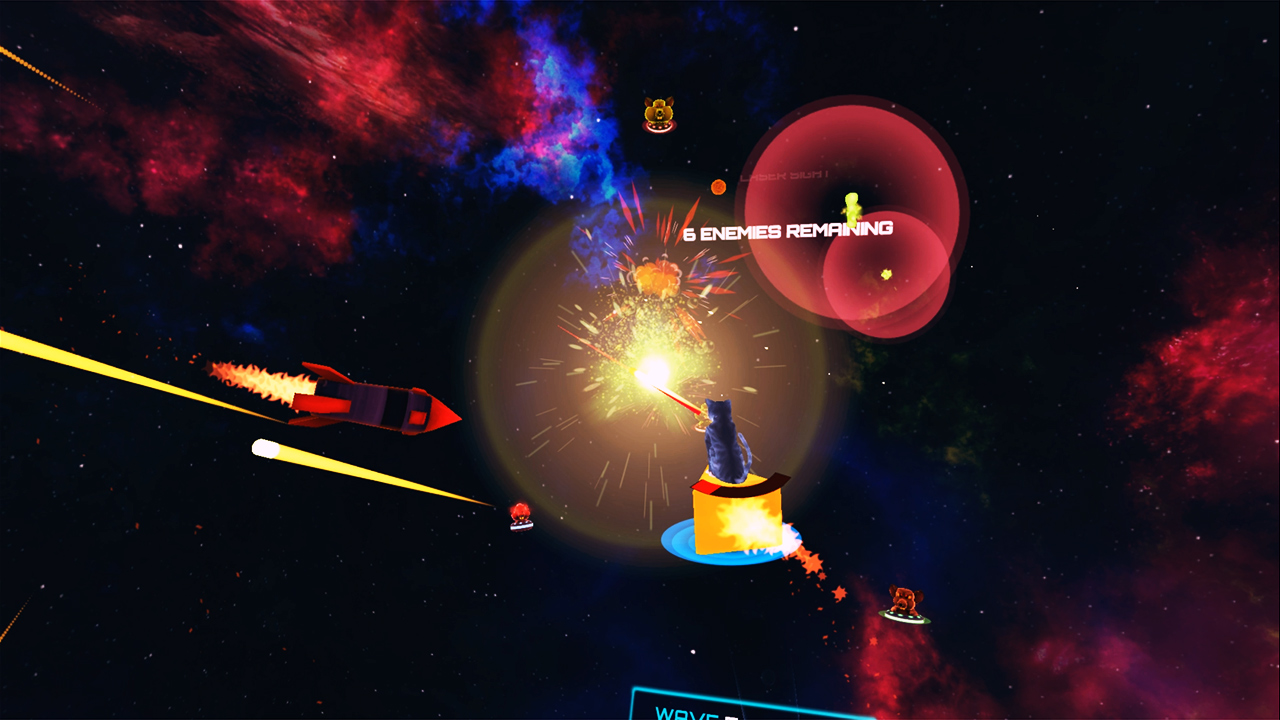 I've been playing the game only a little so far. I've got to level 18, but it looks like there are more levels. The little animated characters look great in VR! I also love being able to choose what hat my cat wears, and then be able to shoot lazers with it. I was super impressed with the first boss!

Cons:
I kind of wish the cats and the hats and "vehicles" were unlocked over time.
Most of the enemy's movement and spawn patterns feels like it's just random.


Overall, the game is pretty much exactly what you'd expect: a Xortex style game but with lazer cats :). Along with Xortex, this is the best bullet hell shooter I've played in VR. I was a bit put off by the team but it isn't that prominent while you're playing (you mostly see lasers, not animals).

- Too easy: First time playing I got to 45 mins on easy before suiciding. Second time playing I unlocked all the upgrades on hard and only came close to dying once. I still haven't died. It took more than an hour.
- Your score is only updated to leaderboards when you die. Maybe this why there are less than 10 people there?
- Only one boss (a dog) that is lame and much easier than the normal waves and immune to damage most of the time.. So I took a chance on this game as I wasn't impressed with the game title or the description of the game, but it was on sale for $2.49 and I figured there wasn't much to lose. Holy crap, this game is hella fun. Like Xortex 2.0.

There's wave shooters out there where you physically dodge bullets, but in this game because of the scale, you use your hands and switching between hands to avoid danger. There's so many powerups along the way and so many different types of enemies. It's unbelievable the amount of content. I only got through wave 5 on easy on my first playthrough! I already got my money's worth and I'm looking forward to playing a lot more.

This is a must buy as there's very few games that'll entertain this much for this little cash.

Rating 9\/10 (keeping sale price in mind versus fun had). Great game. Don't be put off by the name if you liked xortex your'll love this.
Easy to pick up and play with lots of replayability.

I'd like to see an updaye with different themes for the play space and more enemies also a few extra songs in the sound track would be good.

Other than that whats not to like? cats with monocles for the win!. Like many others it seems, my first experience of "being inside an arcade wave shooter", was Xortex (free in The Lab), & I loved it, so I went looking for other similar games, & found this little gem, which I like even more, very good, highly recommended.

Also similar are space pirate trainer & stardust vr, though this is my first preference as with those 2 you must protect your whole body from enemy fire, rather than just one controller\/ship, I find this a bit more fun.