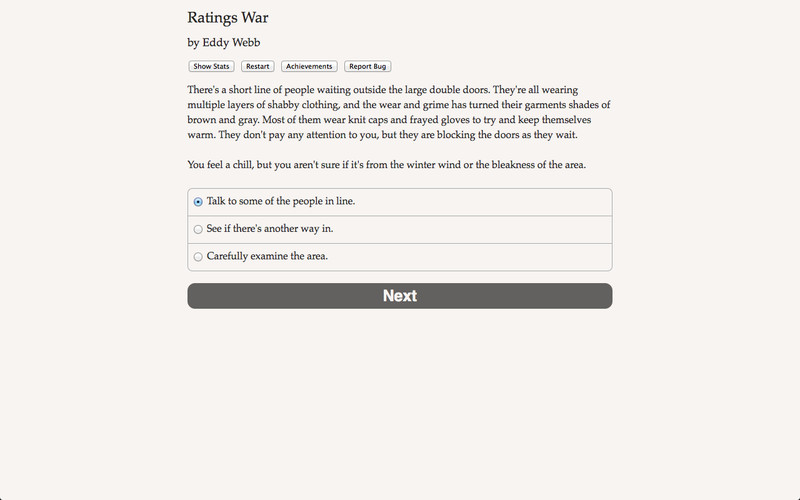 Implant cameras in your eyes to win the news wars of 2061! Record your way through dystopian New Angeles, solving multiple murders and conquering the airwaves as you go!

"Ratings War" is a thrilling 80,000-word interactive novel by Eddy Webb, where your choices control the story. It's entirely text-based--without graphics or sound effects--and fueled by the vast, unstoppable power of your imagination.

Outwit your rivals at the biggest news network in the industry to win market share and dominate the ratings. As one of the first reporters with a pair of cybernetic eyes, you’ll break stories while you live them—and become a celebrity when you uncover a vast criminal conspiracy.

When you blow the whistle on a human trafficking operation, will you focus on facts or on fame? Will you strike out as an independent, or follow the guidelines of your network? You can escape from an underground organ farm—but can you get your footage on the air and win the Ratings War? 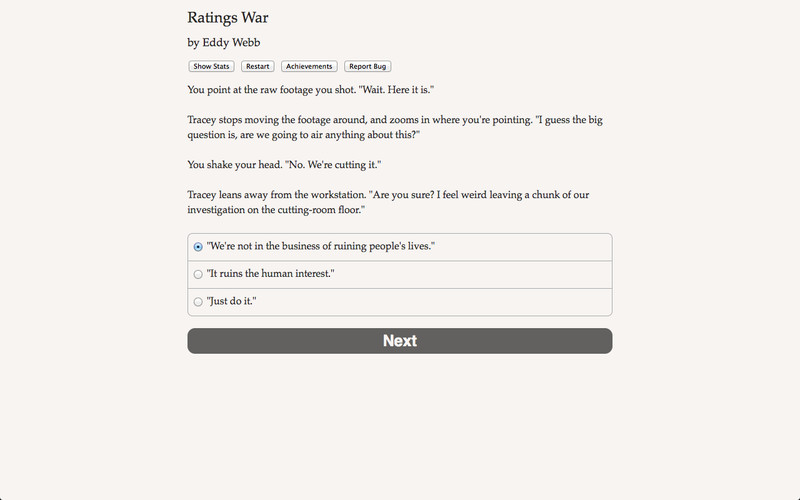 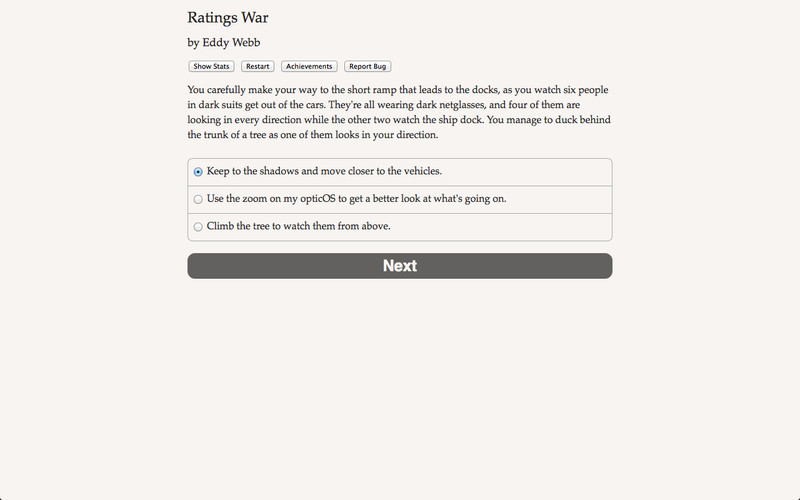 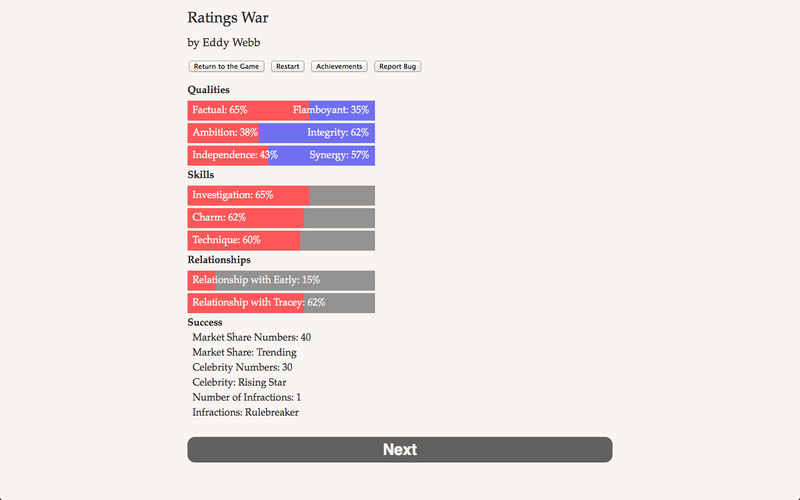 Good text based game, but shorter then previous entries Choice of Games entries (Slammed!, Choice of Robots, etc.).. Absolutely incredible story, amazing writing style and a refreshing game in today's fast-paced, high-action society.. (How i got here\/trivial\/skippable) I got to this game via "Choice of Robots" which positively surprised me. I got Choice of Robots via a sale and was simply interested in playing a completely text based C&C game. I really liked Choice of Robots, your coices really mattered and you were able to explore totally different stories. I think i played around 7 playthroughs of Choice of Robots, this game sadly appears to be a little different.

I managed to stop at a playtime of 115 minutes - yes i am a slow reader - before writing this little review, and at the moment I am contemplating whether or not i want to refund the game, not necessarily because of the money, but more in order to weighten my verdict. Keep in mind that i interrupted my first playthrough and that i am thus not capable of garanteeing anything, the far smaller amount of achievements - compared to Choice of Robots - nevertheless reflects my thoughts.

The story seems to be rather out of your hand, while you could make nearly every single decision in Choice of Robots, this game let's the protagonist or other characters take crucial decisions for you, eliminating the possibility of different playthroughs diverging significantly storywise. To elaborate what i mean i'll have to comment on one example for this, which is impossible without a mild spoiler.
The scene where i stoped and looked at my playtime:

You are making your first real investigation (it did not seem to me that the story could have diverged earlier) and interview someone who called for help, you get out and talk to your "editor"\/helper who wants to meet and talk about the leads you gathered. The protagonist and her helper quickly talk about where to meet and it is decided that you meet at a coffee. You can't decide differently and you still get an achievement for drinking a coffee. This just feels odd. Espacially since the consequences of meeting in the office rather than in a coffee place are talked about, instead of giving you the possibility to think about the different outcomes and make a reflected decision, changing the path the story would take.<\/span><\/span>

All in all i am fairly dissapointed at this game atm, and will consider whether or not i will refund it within the next days.
. It's like if Adam Jensen worked for a news network, and couldn't fight for\u2665\u2665\u2665\u2665\u2665\u2665 and the whole world was even more dystopian cyberpunk than before. It's a short, sweet, to the point adventure that I heartily recommend for anyone who enjoys the Choice of Games line. I feel like there was some wasted potential in how long it took for me to complete it, there could've been more stories, more politics, but hey, for what it is, it's good. Choice of Robots will always be my personal favorite, and what I compare all their stories too. I didn't enjoy this one as much as Choice of Robots, but I can say it was very solid, despite the inherent weaknesses of the genre.. An RPG that leaves all decisions to you. This allows for a variety o fevents tailored to how YOU want to play the game. Everything is included. Everything impacts. And nothing just doesn't make a difference.

By far the one of the best RPG's I have a ever played.. Ratings War is a story about being a reporter in a near-future setting. It's competently executed and I've recommended it to several people already. The cyberpunk theming is nice, but not deep, which I think is actually the fault of the character POV rather than the author. It isn't sci-fi to the character! The author does seem to have given thought to the implications of the technologies presented.

The protagonist herself (her by default; player can choose otherwise) is a peaceful but tenacious individual who is sympathetic in every path I've played so far. I like that decisions are typically given sympathetic treatment whether they conform to the preferences of people outside of journalism or not. People aren't villains in their own POV. (I wonder if accepting that bribe is treated sympathetically, too...) In general, the game's writing is empathetic, and save for the character I complained about in the second paragraph every character major or minor is given some footing for the decisions they make. That's pretty awesome.

Although it is not without its quirks, I recommend Ratings War as an experience.