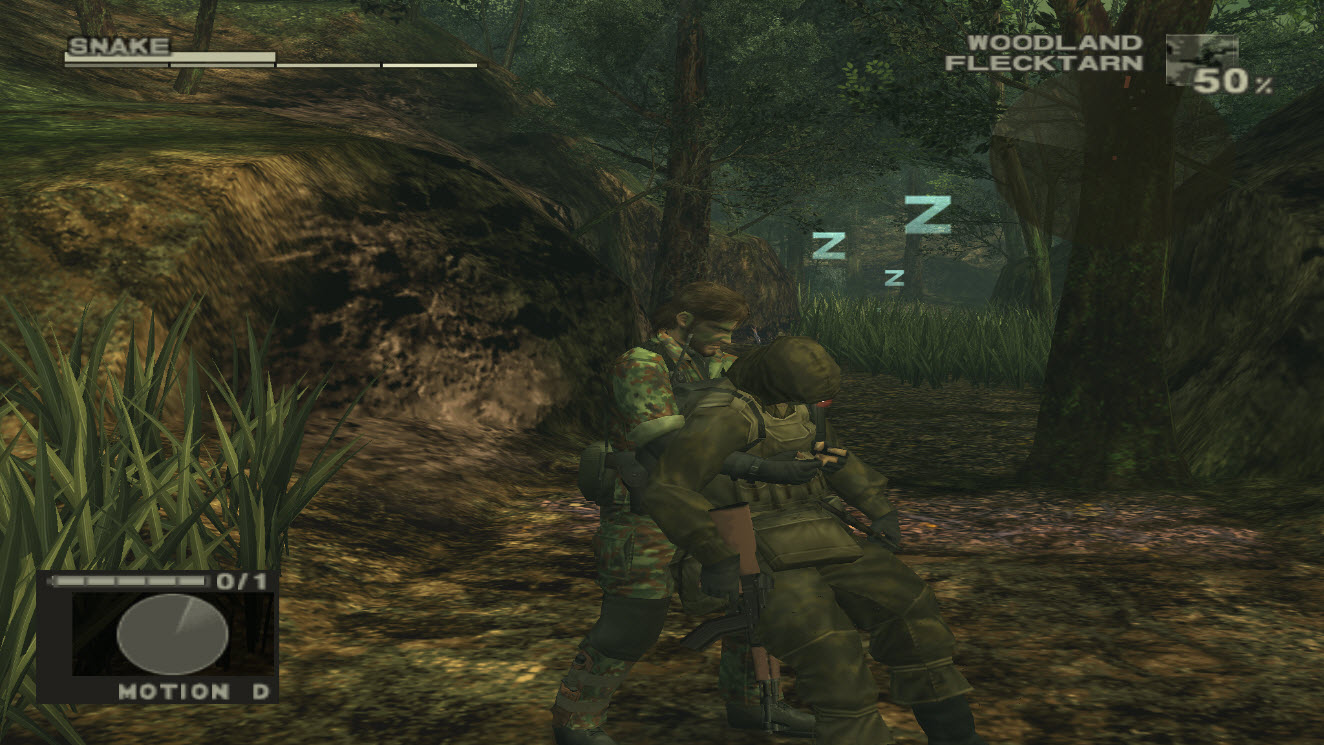 Rival nations are secretly developing weapons that could threaten the future of mankind. Deep in the jungle, an elite tactical soldier must combine stealth with survival to infiltrate the enemy and stop a weapon of mass destruction from triggering the largest full-scale war the world has ever seen. The game is set in a sweltering jungle where players must fight for survival by battling relentless natural elements, as well as an onslaught of ruthless enemy soldiers.
After having defected to the West, a Soviet scientist has developed a new weapon that would change the world, the Shagohod missile system, but he was sent back as part of a deal within the Cuban Missile Crisis. Now the West wants him back, and Naked Snake, the man who would one day become Big Boss, goes to rescue him. However, the legendary soldier (and Snake's mentor), The Boss, defects to the U.S.S.R., and the renegade Soviet colonel that she now serves explodes a nuclear weapon against his own countrymen. The Soviet leaders blame the U.S. for the nuclear attack and threaten retaliation unless the U.S. can prove its innocence in the matter. A deal is made between the East and West: the U.S. must assassinate The Boss and her team of WWII rogue veterans (the Cobra Squad), eliminate the Soviet colonel and his rebels, rescue the scientist once again and destroy the prototype Shagohod within one week or risk a nuclear war with the Soviet Union. Seen as being responsible for letting The Boss get away, Snake must complete the mission or he and his support team will be executed for failing in the original operation and letting the nuclear war begin. Parachuting alone into the treacherous jungle, Operation: Snake Eater commences.
This is favorite MGS game! The story is amazing, and manages to build on what was established in the prior game, set the sequel up for a thrilling conclusion while simultaneously being a fresh and unfamiliar narrative. I love sneaking around in urban settings of past games, but the jungles of 1960's Russia are a refreshing alternative that adds a new dimension to the conflict at hand. Not only is it you versus enemy soldiers and armed vehicles, but it's also you versus nature. The gameplay is as good, varied, and balanced as it gets in the series. CQC and interrogating guards never get old, and the hunting aspect provides a fresh new challenge. The Boss fights are among the most entertaining in the series, and the fight with The End is one of the best in any series ever.
One thing I've learned after playing MGS3 is to control your expectations before actually experiencing something, even this "something" is actually so great and over-the-top. I've seen the trailer in high-definition for too many times that, the actual game didn't quite live up to that standard of real-time lighting and shadowing......In the era of media it's almost inevitable to be fed up with your favorite movie or video game especially when Far Cry, Half-life 2, Doom 3 all came out in that year.

This is a review from a long-time MGS fan, but instead of worshiping I'd like to offer you something useful and reflect on this series. Please also refer to my other MGS reviews on this site.

MGS3 is flawed, sadly, even in the eyes of the lovers like me and many other fans. Not only is the graphics become dim and lagged(hardly a 30 fps frame rate), but also the game might be too linear. The scenes and stages are beautiful, but one can also found it not as distinctive and interactive as prequels. The fruits can be shot off the tree and enemies can be driven off the scene by a honeycomb, and you can fistfight the crocodiles if you want to be a martyr. But none of these ideas are as fun as collecting enemies's dog tags in MGS2. It's a bit outrageous for the makers to test too many underdeveloped concepts at the price of players' dollars. But, one can also argue it's where MGS3's greatness lies. The makers tried to maintain it as a pure "interactive movie" using forced camera angles, while improving the dimensions of interaction to give players chances to actually heal, feed and disguise yourself using a ladened menu. Whether it's fun or not depends on you. But to me, I felt as if I was forced into a kind of laboratory experiment, and most unfortunately, I felt not given enough autonomy to screw around like in MGS2. The hunting/feeding system is fun but one can easily touch the ceiling that "huh, so I just shoot it and find it in menu, nothing more to mess with?" This also applies to the healing system. You feel as if delighted a little bit but touch the ceiling too fast. Many things indicate that MGS3 is not created for this generation of technology, but rather for next 2 or 3 generations of consoles where simulations advanced to all of our senses.

Again, this doesn't mean MGS3 is not a good game. The fun lies within "play it yourself using your brain". You can ask as many hypothetical questions as possible. Like, "what if I got two rabbits today, and reserve them in my bag for a week". Common senses tell you food will turn after a week, therefore you can expect to equip the "rotten rabbit ration" as a weapon and throw it to the famished enemies. Such kind of fun can be further explored using your imagination and one can even develop his unique tactics in beating the game. Maybe you'd also like to try blowing up enemy food storages and feed every patrol with poison/rotten food instead of feeding them with bullets.

Graphically, let's also blame PS2's incompetency. Using enormous amounts of polygons, the makers accomplished an impossible mission to create an interactive jungle. Big Boss' adventure is also visually rich, and one can encounter the most mesmerizing boss fight in the game history--the sniper battle with The End. Big Boss' emotions and physical conditions are continued to be challenged by the harsh environment and tough battles. Along the way, he lost an eye, several ribs and dug out many bullets under his skin(by players). After he lost the right eye, one will notice the right side of screen became dim and dark. Such details reflect the hard work of the team. Also as a compensation to reduced frame rate and textures, the characters animations are far improved especially in facial expressions. And that will lead the players to the very core of MGS3--The Boss.

To say that MGS3 is the most touching story told in video game format is not an exaggeration. Or, we should say Hideo Kojima successfully told a traditional samurai tale using Western characters. The Boss, the abandoned patriot who dedicated everything to her country had to be killed by the player. This kind of tragedy and the various angles of interpretations contributed to the power of the story. Therefore the real dynamite of MGS3 is not the graphics, the game-play, the boss fights, but The Boss. It's so powerful an emotional dynamite that millions of players were brought to tears in the end of the game. In the end, Big Boss walked to the empty grave of a "patriot that saved the world from nuclear holocaust" and saluted with a tearful eye. Players are allowed to see through his tearful eye while crying in the real world by themselves. MGS are always appreciated by many as a successful case to hybrid Eastern and Western cultures. But since MGS3, the trend turned to favor Eastern values and core spirits more than Western ones. The Boss is a reincarnation of various ancient Eastern patriots since the core value of Easterners was "loyalty" in general. It's done with heart and explored with convincing messages.On the other hand, Hideo Kojima and other co-creators of Metal Gear saga's superficial interpretations about Western civilization are not exposed until MGS4. Inevitably, MGS4's story touched the cover of the Bible and crashed into Pacific Ocean. But what can you expect from anything that try to harmonize West and East? Still, MGS is important to me. It's still inspiring and enlightening in many ways. If you, like me, grew up with it, you will probably store the collection all the 4 games even after 20 years. Let's pray for MGS series to have a better tomorrow.
1. Snake Eater (Cynthia Harrell), 2. "METAL GEAR SOLID" Main Theme (METAL GEAR SOLID 3 version), 3. CQC, 4. Virtuous Mission, 5. On The Ground ~ Battle In The Jungle, 6. KGBVSGRU, 7. Shagohod, 8. Operation Snake Eater, 9. Mission Briefing, 10. Across The Border ~ Snake Meets The Boss, 11. Eva's Unveiling, 12. Ocelot Youth ~ Confrontation, 13. The Cobras In The Jungle, 14. The Pain, 15. The Fear, 16. Fortress Sneaking, 17. Underground Tunnel, 18. The Fury,