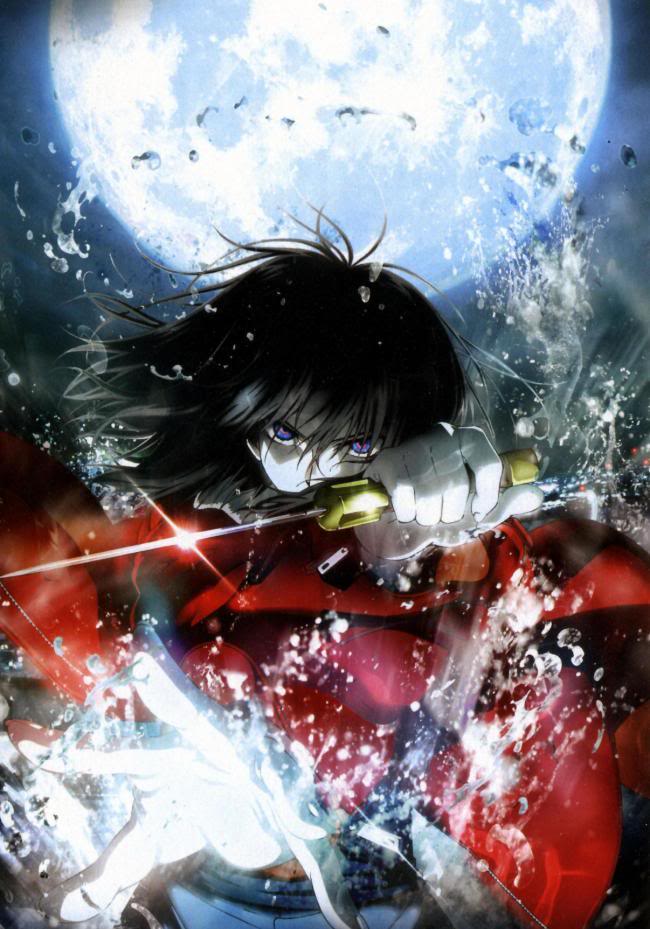 September 1998: A recent spate of unusual suicide incidents where several high school girls fell to their death, but left no suicide note and had apparently no reason to commit suicide. In this case, no apparent relationship. Shiki discovers that there is one thing in common and there is a strange force in the shadows behind this bizarre deaths. Will she discover the culprit before someone else's life is in danger?
Firstly this is a review of all the Kara No Kyoukai series of films, of which there is 8 at the time I write this. There are no spoilers and specific details about characters and plot lines will be kept vague.

Introduction; When I came across this series of films id been mostly watching anime series containing supernatural and romance elements, having tried action based ones and found them to be rather boring at the start of my anime testing adventure. This was also the first anime I watched that was in Japanese with sub titles rather than a dubbed version and also the first feature film(s) id watched as oppose to the usual 25min series.

Characters and plot; Most of the films are centered around a knife wielding anti-heroine with glowing eyes and the ability to see the end of all things, represented as lines she sees in objects and people, that when slashed will bring about their destruction. Our heroine (and occasionally) her gang of scooby sidekicks from a kind of supernatural detective agency, investigate and ultimately destroy an array of evils while she desperately tries to maintain her humanity.. or at least thats what they want us to think. I say anti-hero loosely because she spends a large portion of some of the films trying to convince us shes a monster and becomes the suspect for several acts of foul play a long the way, I never found this particularly convincing and think someone who is tortured by so much evil and lack of humanity probably would't spend half the film talking about it and instead go and get on with some actual evil doings and general shenanigans.

The relationship between her and scooby gang member number 2 is a kind of balancing act where he constantly tries to tell her shes good and that she doesn't actually gain any pleasure from slicing and dicing people and various monster types. In the beginning I found this to be quite cute and appreciated the yin/yang element between them however its continuing presence throughout several films whilst failing to develop starts to become slightly annoying and I found myself thinking 'omg OK your evil.. we get it! now shush about it' This and some other seemingly flat character development sometimes takes its toll, possibly made much worse by the films being out of chronological order. Asides from our 3 main characters who have the emotional content of a teaspoon sometimes, lesser protagonists introduced for specific films are thankfully much better and serve their purpose well (mostly as victims and comic relief) while providing a welcome change of dialog. With the exception of film 6.. whose addition pulls off a battle scene with some fancy looking magic that totally upstages everyone and makes me wonder why they didn't do all the fighting to begin with, oh well. Thats where the faults end (mostly) The antagonists of KnK are very well done, introduction to them and their evil plans could be better, but their characters are diverse and emotive, with some being down right wacky and diabolical. I particularly enjoyed feeling sorry for one of them as they explain twisting peoples arms and legs off with will power alone was necessary so they could feel human! awww! Asides from some mild confusion during the first few films and then again while trying to grasp the complexity of film number 5 for the first time (made slightly better if you cheated and read the synopsis) the rest of the presentation is flawless. The stories fit together nicely by the end of the series and you can sit back and reflect on some of the incredibly far fetched tales you've just witnessed or re-watch the entire set with your new found knowledge. The content is extremely violent in some parts but unlike titles such as 'Elfen Lied' the production quality kept it in the horror category rather than me thinking it was laugh out loud silly, other adult topics such as rape, patricide, and nudity are present but rare, well presented and often used to explain why a character ended up the way they are, so it doesn't seem to over the top for shock value alone.

Production; While the directors for KnK are different for each film the production is the same throughout and this is where the movies shine. All that flat character dialog that seems completely off topic you've been subjected to is suddenly forgiven! The action scenes while short and scarce are simply godlike and easily the best i've seen so far from any anime, in particular films 5+6 excel with lavish battle scenes laden with fancy particle and lighting effects you'd expect from a production with movie funding, so much so that I found myself replaying them multiple times at the end of each movie. The accompanying music is also brilliant and follows the same haunting yet upbeat and compelling theme albeit remixed throughout the movies. Scenes are highly atmospheric, dark and complex and often fill in for the seeming lack of character emotion in some parts. At the time of writing this there is no English dub for the films, which is slightly disappointing because I would have liked to compare voice actors to see if my connection with the main characters improved at all.

Conclusion; 7/10, exceptional production quality, highly imaginative and well presented story content, unfortunately let down by some character development and interaction flaws. Still a must see in my opinion regardless!

Recommendations; I found it quite hard to find similar anime to suggest for this but going from the angle of slightly unhinged leading female roles that I enjoyed you could try Mirai Nikki (ahhhh yuno!) or Elfen Lied, both have graphic violence and other adult themes so ye be warned! Note: This will be a review for all 7 "Kara no Kyoukai" movies. Each film is about a different incident, but there are a lot of flashback scenes that explain past events in latter films. All the movies should be watched in sequence like an anime series rather than individual films.

"Kara no Kyoukai" literally means "Boundary of Emptiness", is a dark fantasy anime about a girl with super powers fighting her urge to commit murder.

Animation quality is absolutely insane, even in theatrical anime standards. Every scene is filled details and wonderful coloring. In fact, animation in these films rival Byousoku 5 Centimeters (2007), which I consider to be the most photorealistic film that retains the anime feel to the drawings.

Each film is directed by a different director, and all 'episodes' have different feel to them, but they're relatively consistent and well-done. I especially liked the 5th film: "Mujun Rasen (Paradox Spiral)".

You will most likely be very confused by the time you finish watching the first 3 movies, but pieces start to connect, and you'll be drawn in to the story. However, I feel the characters could've been developed a lot better (since total run-time of 7 movies are close to a two-season-long/26ep anime series). Also, there's just too much skipped between each incidents, sub-main characters like Touko and Mikiya's sister had smaller roles than I would've liked.

Still, audio/visuals are simply perfect. That alone makes "Kara no Kyoukai" a worthwhile anime to watch, and it's definitely one of the most well-produced and complex anime 'series' ever.