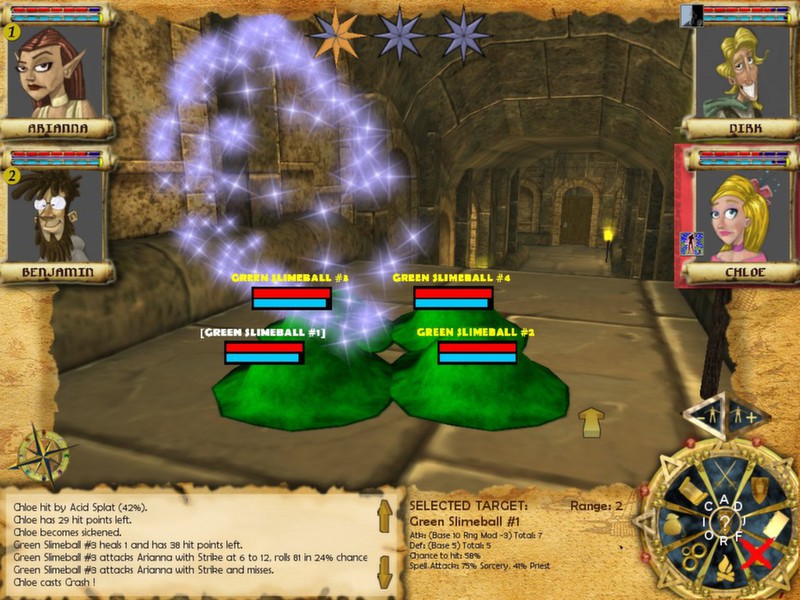 Frayed Knights: The Skull of S'makh-Daon is a 3D indie computer RPG for Windows featuring turn-based combat, old-school sensibilities, and a story of high adventure and comedy. Who says RPGs have to be so serious?

In a world of jaded heroes and veteran adventurers, you play a team of misfits: Arianna, a dainty warrior with an attitude problem; Dirk, an adrenaline-junky rogue who doesn’t seem to understand the word ‘subtle;’ Benjamin, a nature-priest and an ill-suited newcomer to the adventuring lifestyle, and Chloe, a ditsy sorceress with a love of cute, fuzzy animals and setting her enemies on fire.

Adventuring is always a dangerous profession, but recently things have gotten bad. Very bad. Teams of expert fortune-hunters are getting "morted," suffering great losses against enemies that are better prepared than ever. In the taverns and Adventurer's Guildhalls, whispered rumors speak of the return of an evil that once all but destroyed civilization. But as many great and famous adventurers fall to this growing threat, perhaps this bunch of losers - called "The Frayed Knights" (but never to their faces) - might just be the heroes the world really needs:

The wrong people at the wrong time. 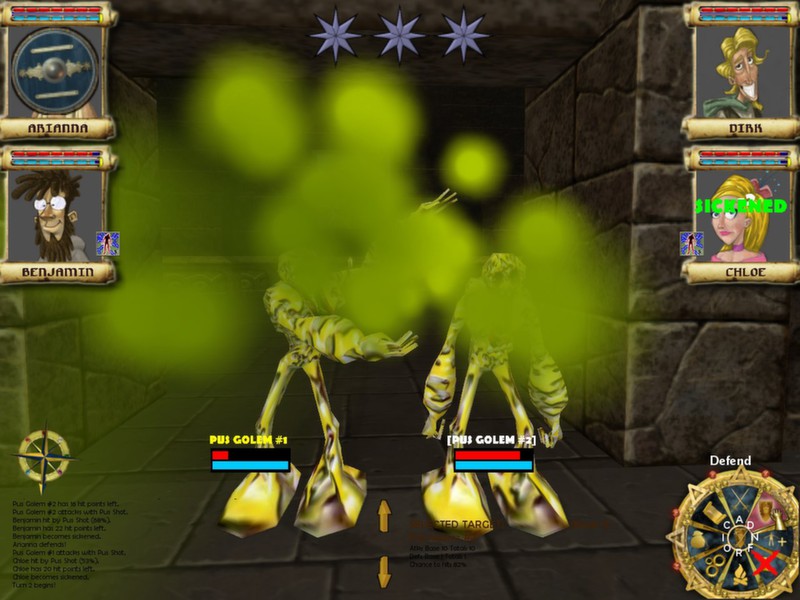 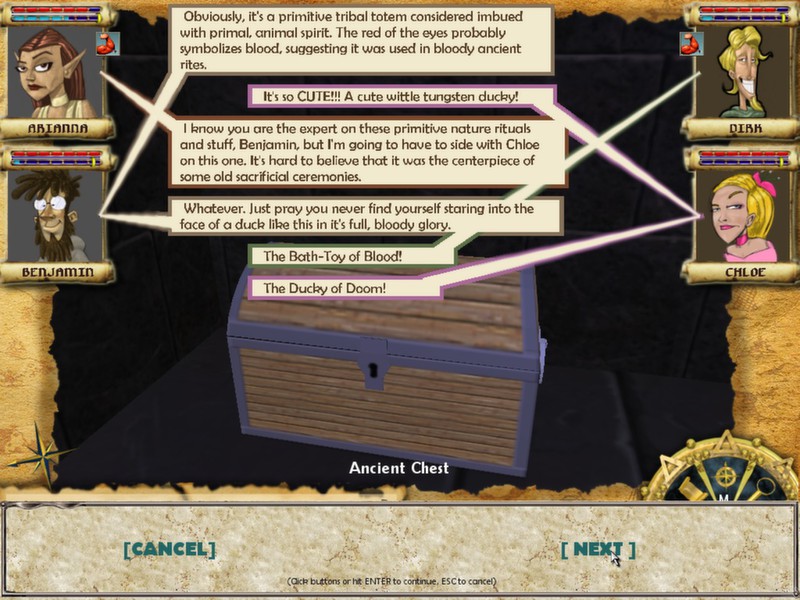 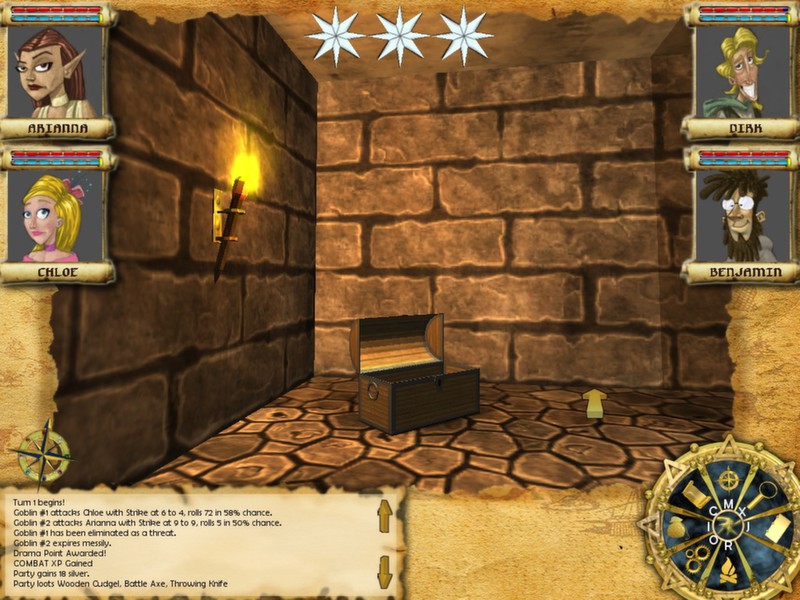 I rarely write interviews for games on Steam, but I really enjoyed this one. Know what you're getting into. The price tag reflects the quality of the graphics, music and what not. Its an indie game made by a very small team and it shows. The style is cartoony, and light hearted and that's not everyone's thing. You also have a group of premade characters, though the freeform skill system still means you can "multiclass" them with few problems. For example the thief can be effective made into a combat oriented thief or a thief\/cleric type character. I made my mage into an archer\/mage for example. The game is a first person\/party based game and it looks a lot like Wizardry 8 and feels like it too. There are random encounters, the game has a lot of party building options, and so its not really a casual game. Its a short, fun RPG if you like these kinds of games. Its not Might and Magic 10 or Wizardry 8, but if you have enjoyed those and are looking for something similar and don't mind the shorter playing time and light hearted gameplay, than I can definately recommend Frayed Knights.. Genuinely funny dialogue and an interesting combat system let down by:
- occasional (apparently) random encounters
- Drama star system designed to prevent save scumming also misses the point of saving for reasons *other* than save scumming. In fixing one problem, they created another.
- Seems to be deliberately designed to push you back to town on a regular basis
- The town is... basically pretty boring. Takes too long to wander around it compared to the amount of stuff to do.
- NPCs that are nowhere near as interesting as the protagonist PCs
- The effects of many of the perks & upgrades are not well explained.
- The graphics are about on par with Might & Magic 6-8, which is to say mediocre by late 90s standards. I don't actually mind this much, but if you want eye candy look elsewhere.. i bought this game too and it does not work i have wasted so much money on steam and half the games dont work steam needs to correct this problem. Let me start off by saying that this game isn't terrible. During dungeons, its graphics can pass for "dated," and it \/does\/ have many of the qualities that I've come to love about the CRPG genre. However, it has downsides. Granted some of these are personal dislikes and may not be the case for everyone. In fact, if you -disagree- with this review, that's cool. I think I'm going to go ahead and be the bad guy if that means pointing out the flaws in this game that so many people are intentionally blind to. If you want the cliffnotes version of this review: take the positive reviews of this game with a grain of salt, and maybe go play something else.

So... first off, I felt I had a few miscommunications going into this game. The game claims character customization, and for some reason I was thinking that meant character creation. Not so: you play the game with the same party of four characters. To be fair, there's dialogue and banter and character development with these four characters, maybe even a bit with the npcs in the game. Even so, I consider this one one of the game's downsides. Why? Well, my all-time favorite games in the CRPG genre allow for actual character creation where you can pick race, class, and skillsets. To me, that makes each of the characters feel more relevant to -me-. I've seen games pull it off without char creation (Aarklash Legacy did that very well), but I really just kind of failed to care about the main characters in Frayed Knights. If you don't have that issue, good for you.

The graphics were probably the real deal-breaker for me. I try to be open-minded with graphics, considering some of my favorite CRPGs have dated graphics. That being said, Frayed Knights was simply unplayable at times. The models, textures, and animations of monsters weren't great, with some standing out as being particularly yuck. My real sticking point here is the towns, though. You are free to walk around in towns the same as a dungeon, yet that makes my next point glaringly obvious for players who make it this far: there really was a bare minimum of effort put into the towns. The house layouts are uninspiring, sure. But the real problem is the character models. Out of the few that don't have really terrible anatomy, they probably aren't even animated. It's honestly an embarassment of a town.

So, yes. There are a lot of things this game did. There might even be a few things this game did well. I -don't- think it poured life back into the CRPG genre, I -don't- think it's what CRPG fans have been waiting for, and I hate to say it but I don't think it's worth the ten dollars you could be spending on a better CRPG. Putting zany character sprites with goofy dialogue and fantasy names like "smakh daon" are really kind of misplaced effort--no matter how much you polish a clod, it's still a clod. In essence, this is an unfinished game that really can't stand up to the legacy of its genre. You could probably put the ten dollars needed for this game toward something good like Aarklash Legacy or Wizardry 8.. It's actually a really nice game. I had some troubles with the graphics first, because...while I like old school 3D graphics, some of the enemies looked a little bit strange. But once I overcame this, I had a lot of fun playing this game. If you like old CRPG, this is for you.
The GUI is something to get used to and even if you do, there are still some annoyances left that will bother you throughout the game, but even Skyrim has those, so...
The graphics are, as said, old school 3D. Personally, I like this. But even if you don't, I bet that you won't notice it after playing it for a while.
The story is fun and the character interaction is too. However, it's never over the top. It's always likeable.

Don't get fooled by the first impression...you will feel like as if you are back in 2000 and are playing the latest and greatest game.. So ... Frayed Knights.

It is one heck of a good game! It has it's pros and cons though. But I beat it, and here is what I think.

Let's get the bad stuff out of the way first.

1. Items and spell descriptions - Some of these can be totally wrong (I'm looking at you Peel Armor and Potion of Resist Disease), so it can get confusing. But once you figure out what they are, it isn't bad.

2. Quick spell slots - Only 3? That's right. So most of the time, you'll forget about your other spells. That is a pain. I'd suggest priniting out a spell list for yourself.

3. Stars - Though this mechaninc is neat in itself, losing it when you have to quit the game because of an emergency or something else while in battle ... and you LOSE all the stars you got? I can live without that.

4. Skill descriptions - Some can be pretty easy to figure out while others? I still have no idea what they do. Eh ...

But the story (which I was very sad to see end) was great. There was a few twists in there that caught me off guard, and my dad and I had a few discussions over dinner on what we thought was happening and who the bad guy\/girl was.

Also, I did a bit of research, since at the end of the game, the party had hinted at a second one in the works. I found this page on the creator's blog http:\/\/rampantgames.com\/blog\/?p=7763<\/a> which was back in 2014. I tried contacting them about it, but no luck.

So if the developer reads this, I hope you continue to make Frayed Knights 2! Arianna, Dirk, Ben, and Chloe are all ready to continue their adventures.. Overall a good tactical party-based RPG. Funny without being corny. It not only takes itself lightly, it mocks some of the common tropes of the genre.

Graphics are mediocre, dialogue is hilarious and riveting, and quests are often surprising.

Combat is not simply about killing the enemy, it is also about resource management. The more spells or attacks you use, the more tired your characters become.

Characters start with defined roles (thief, fighter, priest, sorcerer), but with open customization you can make them whatever you want.

If you want a good RPG but aren't afraid of a little sillyness, giv...