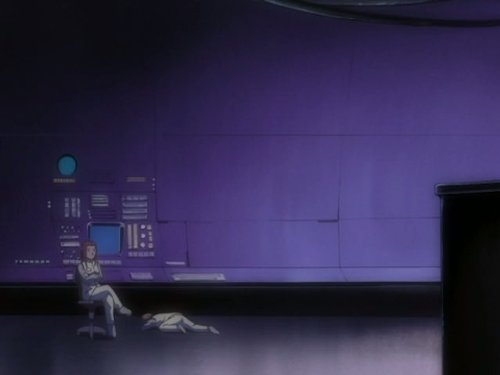 Takato and Guilmon are about to defeat a DarkLizardmon when Yamaki comes and captures it. Back at Hypnos, they scan the data of the Digimon, destroying it and now know what Digimon are made of.
Another slow, talky episode, but one that delves into some of the more intriguing secrets of the story, largely thanks to Yamaki. The scene of DarkLizardmon being scanned in the tank is less intense than it should be, mainly because it emphasizes the differing views on whether digimon are living creatures or not, which is one of the weaker thematic elements of the series. The contrast between the gloomy looking tank she is suspended in and the brightly lit room where the scientists are doing their thing only serves to confuse the scene's tone. On the other hand, we get a great deal of information regarding the origins of digimon and Yamaki's plans to get rid of them. A lot of the pseudo-scientific jargon is written well enough to sound credible, particularly during the rundown on what bio-emerging is and a clarification on a key mechanic of the Juggernaut program.

The rest doesn't flow as well and, like many episodes with a similar objective, sometimes feels like a mishmash of insignificant matters. Rika's little scene doesn't tell us anything we don't already know, and the stuff with Henry's family (aside from a visit from an agent that can apparently teleport) is inconsequential. Takato's part, however, comes surprisingly close to matching Yamaki's. We see him FINALLY exhibit a new concern, specifically over the possibility that Guilmon may become something frightening after digivolving too far. Sure, the other two kids have faced this fear to one degree or another and, essentially, it is really another way for him to potentially lose Guilmon, but this subject has a greater capacity for depth than Guilmon merely running off or disappearing. Additionally, unlike with the other two, it will yield poignant results down the road. The conversation at the playground is an effective demonstration of why a simple improvement in communication can go a long way, and this scene alone carries more weight than the entirety of Taktato's interactions with Henry and Rika.

Among other things, the animation quality is kind of lopsided. Some scenes look great, particularly the first encounter with Yamaki, while others, like the chat with Miss Asaji and Yamaki's briefing with his superiors are very transparent attempts to save on animation costs (heck, the 4 screens have stills instead of a live-feed). The closing moments are foreboding and really draw you in for the ensuing event.